Oh Dear, Things are not right

Portland Republican says party should use militia groups after racial attack. As tensions continue in Portland following the racially charged murder of two men on Friday, the top Republican in the city said he is considering using militia groups as security for public events. 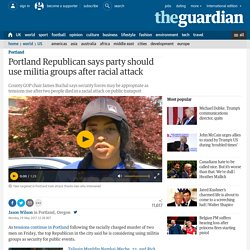 Taliesin Myrddin Namkai-Meche, 23, and Rick Best, 53, were stabbed to death and 21-year-old student Micah David-Cole Fletcher was injured when they came to the aid of two women being subjected to hate speech on public transport. The suspect, Jeremy Christian, 35, was found to hold white supremacist views and to have attended an “alt-right” rally in the city. On Monday, Donald Trump issued a belated message of condolence. Asked about the president’s tweet, Portland mayor Ted Wheeler told the Guardian: “Our current political climate allows far too much room for those who spread bigotry. Violent words can lead to violent acts. “All elected leaders in America, all people of good conscience, must work deliberately change our political dialogue.” “It’s a complex issue. Clapper: Russia 'absolutely' meddled in the 2016 election. By using this site, you agree to the Privacy Policy and Terms of Service. 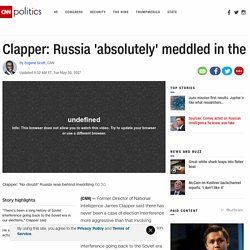 Donald Trump to Hungry Seniors: Drop Dead – BillMoyers.com. Congress and Farmers Are Shocked By Proposed USDA Cuts. A tractor pulls a planter through a field as corn is planted in Princeton, Ill. 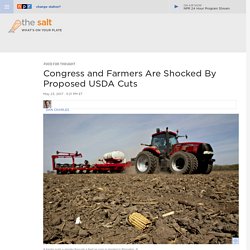 Daniel Acker/Bloomberg/Getty Images hide caption toggle caption Daniel Acker/Bloomberg/Getty Images. This is what emboldened white supremacists look like. They hate the US government, and they're multiplying: the terrifying rise of 'sovereign citizens' At LA airport's new private terminal, the rich can watch normal people suffer. The guiltiest pleasure at Los Angeles international airport’s (LAX) new private terminal for the mega-rich is not the plush, hushed privacy, or the beds with comforters, or the massages, or the coriander-scented soap, or the Willie Wonka-style array of chocolates and jelly beans, or the Napa Valley cabernet. 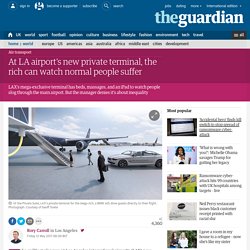 It is the iPad that sits on a counter at the entrance, with a typed little note: “Here is a glimpse of what you’re missing over at the main terminal right now.” The screen shows travellers hauling bags through packed terminals, queuing in long lines, looking harassed and being swallowed into pushing, shoving paparazzi scrums – routine hazards for the 80 million people who pass through LAX each year. “There they process thousands of people at a time, they’re barking. The Comey Letter Probably Cost Clinton The Election. This is the tenth article in a series that reviews news coverage of the 2016 general election, explores how Donald Trump won and why his chances were underrated by most of the American media. 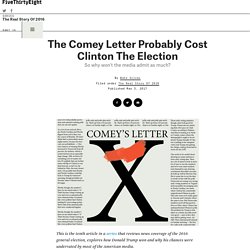 Hillary Clinton would probably be president if FBI Director James Comey had not sent a letter to Congress on Oct. 28. The letter, which said the FBI had “learned of the existence of emails that appear to be pertinent to the investigation” into the private email server that Clinton used as secretary of state, upended the news cycle and soon halved Clinton’s lead in the polls, imperiling her position in the Electoral College. The letter isn’t the only reason that Clinton lost. Troubled Wisconsin Man Goes on 50 State Killing Spree. On Thursday afternoon, in Washington D.C., Paul Ryan, 45, entered his place of work in a murderous frenzy, killing thousands and injuring millions more, before he was finally stopped by the Senate. 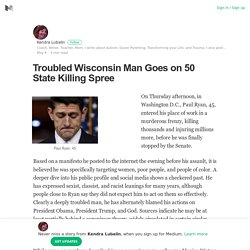 Based on a manifesto he posted to the internet the evening before his assault, it is believed he was specifically targeting women, poor people, and people of color. A deeper dive into his public profile and social media shows a checkered past. He has expressed sexist, classist, and racist leanings for many years, although people close to Ryan say they did not expect him to act on them so effectively. A clinical psychologist explains how Ayn Rand seduced young minds and helped turn the US into a selfish nation. The ‘Atlas Shrugged’ author made selfishness heroic and caring about others weakness. 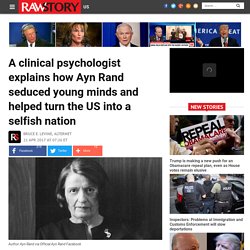 Ayn Rand’s “philosophy” is nearly perfect in its immorality, which makes the size of her audience all the more ominous and symptomatic as we enter a curious new phase in our society….To justify and extol human greed and egotism is to my mind not only immoral, but evil.— Gore Vidal, 1961 Only rarely in U.S. history do writers transform us to become a more caring or less caring nation. ELIZABETH WARREN: The Cover-Up In Trump’s Taxes. New database details White House officials' finances. On Friday night, the White House began releasing financial disclosures for scores of key employees — including familiar names such as Press Secretary Sean Spicer, Counselor to the President Kellyanne Conway and Chief Strategist Stephen K. 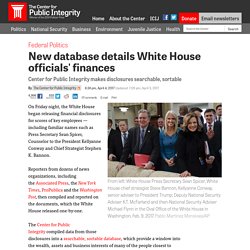 Bannon. Reporters from dozens of news organizations, including the Associated Press, the New York Times, ProPublica and the Washington Post, then compiled and reported on the documents, which the White House released one-by-one. The Center for Public Integrity compiled data from those disclosures into a searchable, sortable database, which provide a window into the wealth, assets and business interests of many of the people closest to President Donald Trump. The Center for Public Integrity’s news developer, Chris Zubak-Skees, extracted these details from more than 90 reports, released in PDF format, using a software tool he created. You can search or download the database for yourself. 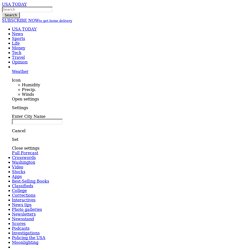 Michael Karas/NorthJersey.com William Thomas, a retired Newark police sergeant, left his home in a body bag. To his dismay, he was still very much alive. A Couple of Things About Jimmy Breslin - BillMoyers.cm. Jimmy Breslin in New York City on May 13, 1983. 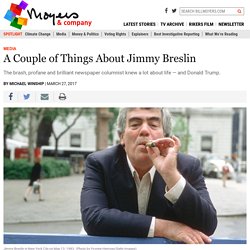 (Photo by Yvonne Hemsey/Getty Images) Last Wednesday, I sat down to write a piece about the late Jimmy Breslin, the newspaper columnist whose blunt yet eloquent and crafted prose captured New York and its environs as no one has since Damon Runyon. The Reclusive Hedge-Fund Tycoon Behind the Trump Presidency. Last month, when President Donald Trump toured a Boeing aircraft plant in North Charleston, South Carolina, he saw a familiar face in the crowd that greeted him: Patrick Caddell, a former Democratic political operative and pollster who, for forty-five years, has been prodding insurgent Presidential candidates to attack the Washington establishment. Caddell, who lives in Charleston, is perhaps best known for helping Jimmy Carter win the 1976 Presidential race. He is also remembered for having collaborated with his friend Warren Beatty on the 1998 satire “Bulworth.”

In that film, a kamikaze candidate abandons the usual talking points and excoriates both the major political parties and the media; voters love his unconventionality, and he becomes improbably popular. If the plot sounds familiar, there’s a reason: in recent years, Caddell has offered political advice to Trump. The White House declined to divulge what Trump and Caddell discussed in North Charleston, as did Caddell. Would 'Trumpcare,' the GOP replacement for Obamacare, allow insurance executives to 'make millions'? U.S. Sen. Tammy Baldwin greeted the Obamacare replacement bill -- she calls it "Trumpcare" -- with a sharp retort. This was the Wisconsin Democrat’s tweet on March 8, 2017, two days after the unveiling of the the House GOP bill:

What should we do if the president is a liar? – Senator Bernie Sanders – Medium. We face a very serious political problem in this country, and that problem is manifested in a post written yesterday by Amber Phillips of The Washington Post. In her piece, Phillips criticizes me for lowering the state of our political discourse, because I accused the president of being a “liar.” What should a United States senator, or any citizen, do if the president is a liar? Does ignoring this reality benefit the American people? Do we make a bad situation worse by disrespecting the president of the United States? Or do we have an obligation to say that he is a liar to protect America’s standing in the world and people’s trust in our institutions?

Not the best we could do. Justice for all except. When a Headscarf Becomes a Target. An American pretended to be from Uganda in college, and learned a different side of beng black in America — Quartz.