How the religious right gained unprecedented access to Trump 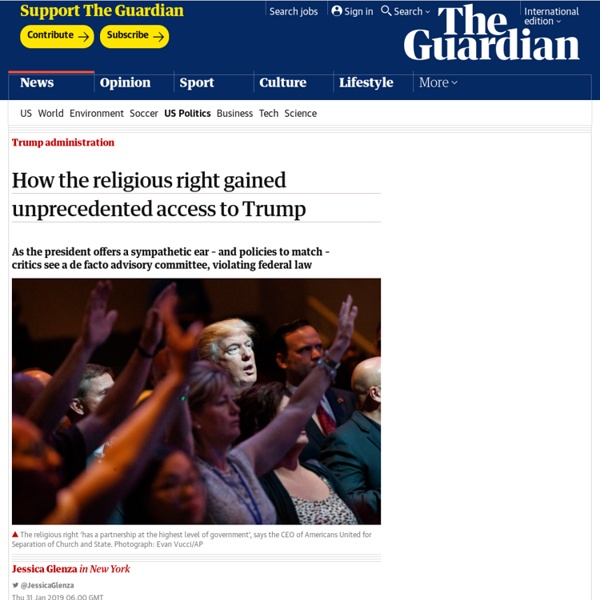 The US health secretary sat for an interview with a man experts say is the leader of a hate group known for “defaming gays and lesbians”, just two days after Karen Pence, the US second lady, was criticized for teaching at a Christian school that bans homosexuality. Alex Azar, secretary of health and human services, was interviewed by the Family Research Council President, Tony Perkins, at an anti-abortion event called ProLifeCon in mid-January. “We are the department of life,” Azar told Perkins, “from conception until natural death, through all of our programs.” He then rattled off victories – new policies that make it difficult to obtain an abortion, including allowing healthcare workers to refuse to treat patients based on moral objections. “The right of conscience is as foundational as the right to life.” The access “has been remarkable, and candidly it has gone back to the campaign”, said Ralph Reed, executive director of the Faith and Freedom Coalition.

Revealed: FBI investigated civil rights group as 'terrorism' threat and viewed KKK as victims The FBI opened a “domestic terrorism” investigation into a civil rights group in California, labeling the activists “extremists” after they protested against neo-Nazis in 2016, new documents reveal. Federal authorities ran a surveillance operation on By Any Means Necessary (Bamn), spying on the leftist group’s movements in an inquiry that came after one of Bamn’s members was stabbed at the white supremacist rally, according to documents obtained by the Guardian. The FBI’s Bamn files reveal: The FBI’s 46-page report on Bamn, obtained by the government transparency non-profit Property of the People through a records request, presented an “astonishing” description of the KKK, said Mike German, a former FBI agent and far-right expert who reviewed the documents for the Guardian. The report ignored “100 years of Klan terrorism that has killed thousands of Americans and continues using violence right up to the present day”, German said. The FBI appeared to have adopted a similar approach.

Shelter worker sentenced to 19 years in prison for sexually abusing migrant boys Levian Pacheco, 25, of Phoenix was convicted last year on seven counts of abusive sexual contact with a ward and three counts of sexual abuse of a ward. The abuse occurred between August 2016 and July 2017 at Southwest Key's Casa Kokopelli facility in Mesa, court records show. It was part of the US government's network of privately run facilities intended to care for unaccompanied minors, according to court documents. Pacheco began working there in May 2016. Trapped in a hoax: survivors of conspiracy theories speak out Conspiracy theories used to be seen as bizarre expressions of harmless eccentrics. Not any more. Gone are the days of outlandish theories about Roswell’s UFOs, the “hoax” moon landings or grassy knolls. Instead, today’s iterations have morphed into political weapons. Turbocharged by social media, they spread with astonishing speed, using death threats as currency.

Forget Trump's border distraction – the real threat is inside the house We already know that the border is a distraction and the dangers there are largely fictions. We know that undocumented immigrants commit crime at lower rates than US-born people; that most undocumented people in the US got here by overstaying their visas, not coming across the southern border illicitly and that undocumented people are a crucial part of the labor force. But we also know that if you can get people excited about imaginary threats, you can distract them from the real ones, and that often the greatest dangers are the people fomenting the excitement. We already know that the serious threats are coming from inside the house. Recently, Trump has been telling lurid and apparently baseless stories about women being victimized by traffickers on the border. If this sounds familiar, it’s because he campaigned on pumped-up stories about Mexico sending rapists to the US.

Virginia students learn in trailers while state offers Amazon huge tax breaks As freezing rain poured down on Virginia last week, a student dressed in only a light red sweater made a mad 40-yard dash from her modular trailer classroom across the parking lot into the warmth of McLean high school in Fairfax county. Due to overcrowding, more than 22,000 students in Fairfax county receive their education in cheaply constructed plywood trailers, often with visible signs of green mold, like those parked next to the baseball fields next to McClean high school. Those trailers, the poor state of school funding in general, low teacher pay and now the huge tax breaks the state is giving to lure in Amazon have led the teachers to strike on Monday, the start of the latest in a series of strikes by educators across the US. In Fairfax county, the third richest county in America, there are over 800 trailers serving as temporary classrooms because the school district cannot afford to build new classrooms. “Teachers have been disempowered in this state for a long time,” said Carter.

A Russian 'troll slayer' went undercover at a troll factory Slaying online trolls can be a lonely business. Just ask Russia’s Lyudmila Savchuk, who first exposed the story of Russia’s disinformation campaign back in 2014. The journalist and 33-year-old mother of two, Savchuk started noticing websites and social media accounts attacking local opposition activists in her hometown of Saint Petersburg with a frequency she hadn’t seen before. The posts were all too similar. The verbal assaults too coordinated. So, when Savchuk later heard that an organization rumored to be behind the campaign — the Internet Research Agency or IRA — was hiring writers, she went for it. The Uninhabitable Earth: David Wallace-Wells on the horrors of climate change “It is, I promise, worse than you think.” That was was the first line of David Wallace-Wells’s horrifying 2017 essay in New York magazine about climate change. It was an attempt to paint a very real picture of our not-too-distant future, a future filled with famines, political chaos, economic collapse, fierce resource competition, and a sun that “cooks us.” Wallace-Wells has since developed his terrifying essay into an even more terrifying book, titled The Uninhabitable Earth: Life After Warming. And it is a brutal read. Wallace-Wells was criticized in 2017 for being too hyperbolic, too doom-and-gloomy.

Chilling effect of immigration rules will blight an American generation “I’ve been told since fifth grade that college makes you a better person,” said the young woman. Her mother, an immigrant from Mexico, had always dreamed of going to college, but never got the chance. So, as she started her senior year at KIPP University Prep, a charter school in San Antonio, she buckled down and filled out applications to more than a dozen schools. Why we need to talk about the media’s role in far-right hate When it comes to the threat of Islamist terrorism, no one doubts the role of radicalisation. The internet, hate preachers such as Anjem Choudary and Abu Hamza, and the western-armed, extremism-exporting state of Saudi Arabia: all play their part in radicalising the impressionable. When it comes to the far right, however, this consensus is absent. The reason for this is as obvious as it is chilling: the hate preachers, recruiting sergeants and useful idiots of rightwing extremism are located in the heart of the British, European and American establishments. They are members of the political and media elite.

The Trump file: Trump's 10 top falsehoods of 2018 President Donald Trump has twice garnered PolitiFact’s Lie of the Year "prize." Readers argued that he was again worthy of the recognition. Readers selected his Pants on Fire comment about Democrats wanting to "invite caravan after caravan" of immigrants into the country with a swath of free benefits and voting privileges as the year’s most outrageous claim.

Immigration, legislation, investigation and child poverty: 4 scholars respond to Trump's State of the Union Editor’s note: In his second State of the Union address, President Donald Trump ranged from generous to combative, eloquent to blunt. He unexpectedly complimented the wave of recently elected Democratic women in the House, and they responded by applauding for themselves. And he spent a lot of time on a his favorite topic: immigration and the border wall. We asked four scholars to choose what they saw as key quotes and add context to the president’s speech.

Internal emails reveal how the chemical lobby fights regulation Jayne DePotter spent almost a decade making her Michigan jewelry studio a second home for young artists seeking direction, seniors looking to exercise their hands and minds and new immigrants in search of community. And then she started to get sick. First came the brain fog, then the painful kidney and bladder symptoms. Why “chickenpox parties” are a terrible idea—in case it’s not obvious Kentucky Governor Matt Bevin made headlines Tuesday after revealing in a radio interview that he had purposefully exposed his nine unvaccinated children to chickenpox, drawing swift condemnation from health experts. In case anyone needs a refresher on why you shouldn’t deprive children of safe, potentially lifesaving vaccines or purposefully expose them to serious, potentially life-threatening infections, here’s a quick rundown. Chickenpox is nothing to mess with Though most children who get the itchy, highly contagious viral disease go on to recover after a week or so of misery, chickenpox can cause severe complications and even death in some.

The Guardian view on Israel’s democracy: killing with impunity, lying without consequence? In the last nine months of 2018, according to the United Nations, Palestinians – many of them children – were killed at the rate of around one a day while taking part in protests along Israel’s perimeter fence with Gaza about their right to return to ancestral homes. They included medics and journalists. Most of the dead were unarmed and posed no danger to anyone, with little more than rocks in their hands and slogans on their lips.