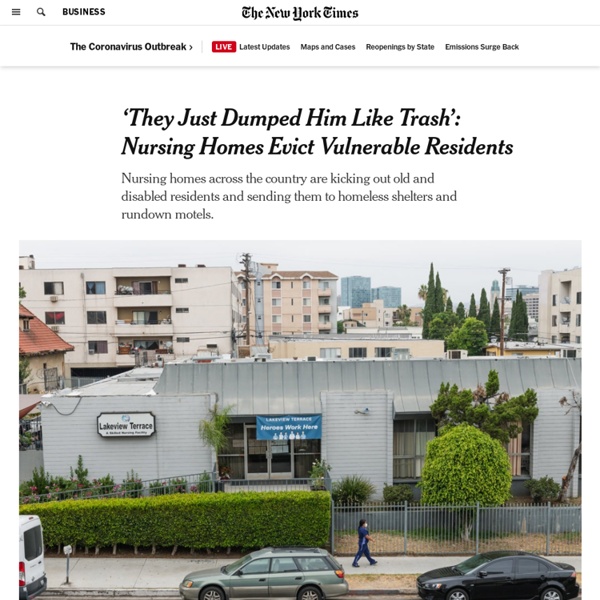 Traditionally, ombudsmen would regularly go to nursing homes. In March, though, ombudsmen — and residents’ families — were required to stop visiting. Evictions followed. “It felt opportunistic, where some homes were basically seizing the moment when everyone is looking the other way to move people out,” said Laurie Facciarossa Brewer, a long-term care ombudsman in New Jersey. Nursing homes are allowed to evict residents if they aren’t able to pay for their care, are endangering others in the facility or have sufficiently recovered. Under federal law, before discharging patients against their will, nursing homes are required to give formal notice to the resident and to the ombudsman’s office. But some homes have figured out a workaround: They pressure residents to leave. That is what David Mellor said happened to him. “I saw what was going on,” Mr. A spokesman for the Windsor Park Care Center declined to comment.

Related:  Oh Dear, Things are not right • Inequality About wealth not Worth • SHAMEFUL • Pandemic

A field guide to Trump's dangerous rhetoric All leaders are demagogues. You may not realize this, because we’ve come to associate the word “demagogue” with only dangerous populist leaders. But in Greek, the word just means “leader of the people” (dēmos “the people” + agōgos “leading”). The wealthy are prepping for tax increases with these three strategies The wealthy are preparing for tax increases, working with their accountants to give away money or shift their income to avoid some of the impact of higher rates. With rising deficits at the state and federal levels, as government spending soars and revenue drops from the Covid-19 crisis, taxes are likely to go up in coming years, especially for the highest earners. Presumptive Democratic nominee Joe Biden told wealthy donors at a fundraiser Monday that he planned to forge ahead with his campaign plan to hike taxes on the wealthy.

Trump's $750 Tax Payment Isn't the Only Number in This Story – BillMoyers.com The tax returns suggest that Trump’s desperation to stay in office is sparked by the 1973 Department of Justice’s Office of Legal Counsel memo saying a sitting president cannot be indicted. (Photo by WIktor Szymanowicz/NurPhoto via Getty Images) September 27, 2020 How Texas Swaggered Into a Coronavirus Disaster But, no worries, the governor added; Texas still has plenty of hospital beds. And today, we have more than 130,000 cases, up from over 60,000 at the end of May. And so, here we are, with a jittery populace and the Texas Medical Center’s coronavirus website competing with TikTok. I.C.U.s in Houston are at 97 percent capacity, with “unsustainable surge capacity” predicted for hospital beds in late July. If “this trajectory persists,” Dr. Hotez tweeted, “Houston would become the worst-affected city in the U.S.”

So Many Coronavirus Patients Don't Get to Say Goodbye Read: The pandemic broke end-of-life care Sometimes, a nurse or doctor managed to connect the patient with their loved ones before the tube went in. But dyspnea is a medical emergency, after all, so in many cases there was simply no time for that last call, or anyone available to arrange it. As the disease progressed, families were left clustering around a phone as a hospital worker held up the device for a final goodbye on FaceTime. Often, the family could talk to their loved one, but not vice versa.

Federal Reserve Chair Jerome Powell Calls for Congress to Spend Stimulus Money Jerome Powell, chairman of the Federal Reserve, gave a speech on Tuesday and, as a result, likely can expect a barrage of incoming tweets shortly. Put simply, Powell says that, due to the pandemic of which the president* told us not to be afraid, an economic calamity is looming unless a lot of somebodies in Washington get scared enough to freaking do something. From CNN: A second wave of coronavirus could "more significantly limit economic activity, not to mention the tragic effects on lives and well-being," Powell said. Proud Boys terrorists In Tuesday night's presidential debate, President Trump declined to condemn white supremacists when asked if he would. Instead, he prompted the Proud Boys, a far-right group, to "stand back and stand by." Afterward, Proud Boys organizer Joe Biggs had an exchange with Enrique Tarrio, chair of the Proud Boys, on the conservative social media platform Parler, according to Mike Baker of The New York Times.

Dr. Anthony Fauci says new virus in China has traits of 2009 H1N1 and 1918 pandemic flu White House coronavirus advisor Dr. Anthony Fauci said Tuesday that U.S. health officials are keeping an eye on a new strain of flu carried by pigs in China that has characteristics of the 2009 H1N1 virus and 1918 pandemic flu. The virus, which scientists are calling “G4 EA H1N1,” has not yet been shown to infect humans but it is exhibiting “reassortment capabilities,” Fauci, director of the National Institute of Allergy and Infectious Diseases, told the Senate Health, Education, Labor and Pensions Committee during a hearing. “In other words, when you get a brand new virus that turns out to be a pandemic virus it’s either due to mutations and/or the reassortment or exchanges of genes,” he told lawmakers. “And they’re seeing virus in swine, in pigs now, that have characteristics of the 2009 H1N1, of the original 1918, which many of our flu viruses have remnants of that in it, as well as segments from other hosts, like swine.”

Doomsday Clock Set At 100 Seconds To Midnight, Issuing Dire Warning Of Apocalypse Topline: The Doomsday Clock was set 100 seconds to midnight Thursday⁠—20 seconds closer than its previous time⁠—indicating that the world is closer to the apocalypse than it has been since the Bulletin of Atomic Scientists began tracking it over 70 years ago. During a Thursday press conference at the National Press Club in Washington, D.C., former California governor Jerry Brown, Mary Robinson, the former president of Ireland, and former UN secretary general Ban Ki-moon unveiled the clock’s new time.Rachel Bronson, the group’s president and CEO, said, “Today we feel no more optimistic” about the world’s outlook, and that the current environment is unstable due to inaction on climate change and a precarious nuclear landscape, and urged the world’s leaders to act on these two issues, or else disaster will occur.“If decision makers fail to act, citizens around the world should echo the words of climate activist Greta Thunberg and say, ‘How dare you?’” Big number: 17 minutes.

These 10 Billionaires Have Gained The Most Money Since Trump’s 2016 Election America’s first billionaire president has been great for the nation’s billionaires, especially these top 10 gainers. Donald Trump’s stint in the White House has been a smashing success for America’s billionaires, who were collectively worth $2.9 trillion the day Trump was elected and are now worth nearly $1 trillion more, thanks to a 60% rise in the U.S. stock market. An even more elite group of billionaires has had it especially good.

Supreme Court rejects request to extend Wisconsin's deadline for counting mail-in ballots “It’s indisputable that Wisconsin has made considerable efforts to accommodate early voting and respond to COVID,” wrote Justice Neil M. Gorsuch. “The district court’s only possible complaint is that the state hasn’t done enough. But how much is enough? … The Constitution provides that state legislatures — not federal judges, not state judges, not state governors, not other state officials — bear primary responsibility for setting election rules.”

Official U.S. coronavirus death toll is 'substantial undercount': Yale study A man who died from the coronavirus disease (COVID-19) is wrapped in a body bag at the United Memorial Medical Center’s coronavirus disease (COVID-19) intensive care unit in Houston, Texas, U.S., June 29, 2020. Callaghan O’Hare | Reuters The number of confirmed U.S. deaths due to the coronavirus is substantially lower than the true tally, according to a study published Wednesday in JAMA Internal Medicine. Using National Center for Health Statistics data, researchers at Yale University compared the number of excess U.S. deaths from any causes with the reported number of weekly U.S. Covid-19 deaths from March 1 through May 30. The numbers were then compared with deaths from the same period in previous years.

Related:
Related:  Oh Dear, Things are not right   -  Inequality About wealth not Worth   -  SHAMEFUL   -  Pandemic