Underpaid and exhausted: the human cost of your Kindle 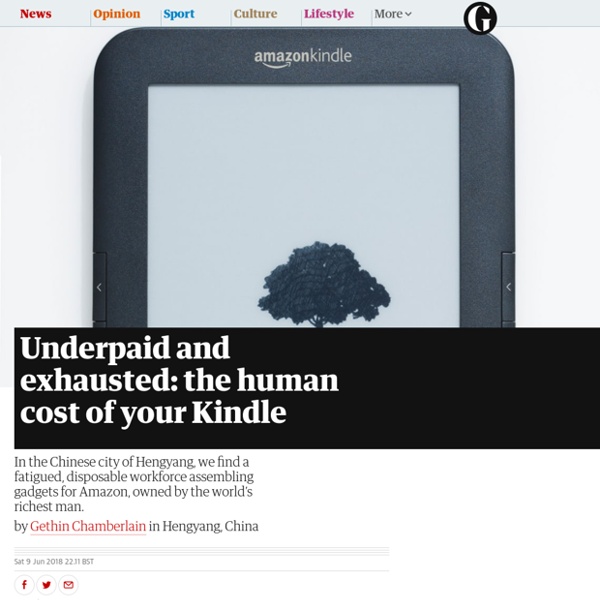 Five o’clock in the morning and the young woman’s eyelids are drooping. All night she has been removing spots of dust from Amazon smartspeakers with a toothbrush. Time seems to crawl. Now she is overwhelmed with exhaustion. She works on, more and more slowly, until she can do no more. She looks around the workshop. Let’s call the young woman Alexa. For an answer, we must fast forward a couple of months to last Monday. The morning is warm but overcast, with a light haze that could be fog or pollution. Dozens of workers are arriving, casually dressed in jeans and T-shirts. These are the people who are making the smart speakers and tablets that Amazon hopes to make a fixture in millions more homes around the world this year: the Echo and Echo Dot – which both spring to life when the user addresses them as Alexa – and the Kindles. The Foxconn factory in Hengyang relies on the tried and tested formula of low wages and long hours. But Bezos doesn’t see the need.

Related:  How it works • Oh Dear, Things are not right • Economics and Inequality

DeVos reinstated for-profit college accreditor despite staff objections, report shows Education Secretary Betsy DeVos earlier this year reinstated an accreditor of for-profit colleges despite findings by her agency’s career staff that the organization failed to meet federal standards, an internal document shows. The report, released by the Education Department on Friday in response to a Freedom of Information Act lawsuit, shows that career department analysts had serious concerns about restoring the federal recognition of the Accrediting Council for Independent Colleges and Schools just a month before DeVos issued an order reinstating the accreditor’s federal status. Story Continued Below Career analysts wrote in the report that ACICS failed to meet 57 of the 93 criteria that accreditors are required to meet under federal law. The Obama administration’s termination of ACICS in 2016 was based on its findings that the accreditor had not followed 21 of the standards, though its review was more limited in scope.

My friend Denis Mukwege is a beacon for all men to follow Today’s announcement of the Nobel peace prize for Denis Mukwege, with co-winner Nadia Murad, is a deeply deserved recognition for an extraordinary man who has risked everything to heal, cherish and honour women. It is a call to men across the planet to do the same. There are many reasons why the world needs to know the story of my friend Mukwege, who founded the Panzi hospital and co-founded the City of Joy in the Democratic Republic of Congo. But in 2018, we need to hear that story more than ever. This week, the president of the United States mocked a survivor of sexual abuse in front of a crowd who jeered and laughed along with him. Violence against women and the rampant misogyny that fuels it is resurgent all over the world.

Capital - Why getting distracted can be a very good thing Alexander Graham Bell was not a fan of multitasking. The inventor of the telephone believed that true creativity came from a single-minded concentration on the issue under consideration – and any distraction would only take you further from your goal. This phenomenon is known as cognitive fixation, and many psychologists now consider it to be the principle barrier to true creativity. “Concentrate all your thoughts upon the work at hand,” he once told the author Orison Swett Marden, for the early Twentieth Century inspirational book, How They Succeeded. “The sun’s rays do not burn until brought into focus.” And until recently, psychological research seemed to agree, showing that we are more efficient – and in jobs that require precision, more accurate – when we keep our minds firmly on track.

I was an Isis sex slave. I tell my story because it is the best weapon I have The slave market opened at night. We could hear the commotion downstairs where militants were registering and organising, and when the first man entered the room, all the girls started screaming. It was like the scene of an explosion. We moaned as though wounded, doubling over and vomiting on the floor, but none of it stopped the militants. They paced around the room, staring at us, while we screamed and begged. Trump will personally save up to $15m under tax bill, analysis finds Donald Trump and six members of his inner circle will be big winners of the Republicans’ vast tax overhaul, with the president personally benefiting from a tax cut of up to $15m a year, research shows. The US president chalked up his first big legislative win on Wednesday with the $1.5tn bill, the most sweeping revamp of the tax code in three decades, slashing taxes for corporations and the wealthy and dealing the heaviest blow yet to Obamacare. But analysis by a leading Washington thinktank, the Center for American Progress (CAP), finds that changes to business rules will save Trump roughly $11m to $15m per year, while an amendment to the estate tax – the tax on the transfer of an estate of a deceased person – would potentially save his heirs $4.5m. Under current law, the first $11.2m of a couple’s estate’s value is excluded from taxation, and any amount above this is taxed at a 40% rate. The new bill doubles the exemption to $22.4m.

Consent Form On a Thursday evening in late January, the faithful gather. They trickle into the Church of Perpetual Life, about an hour’s drive north of Miami, until a throng of around 100 people cram around tables lining the first-floor hall of this renovated house of worship. Along one wall is a display of reading material: pamphlets on heart disease, flyers itemizing the additives in Cheez-Its and their detrimental health effects, a handbill about the Ms. Senior Florida pageant. On the other side of the room, there’s a snack buffet with beans, broccoli, carrots, cubed cheese, sliced meats, and olives. It’s easy to pick out the regulars, who mingle clutching biology textbooks or readily shaking hands.

Related:
Related:  How it works   -  Oh Dear, Things are not right   -  Economics and Inequality