'We have different ways of coping': the global heatwave from Beijing to Bukhara 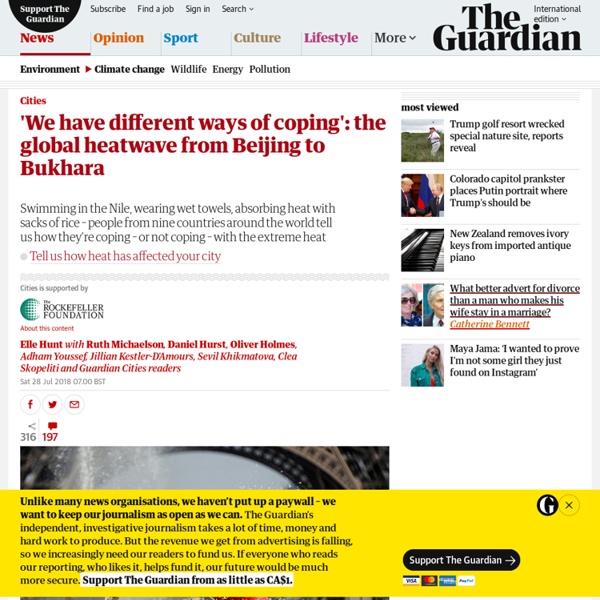 In Cairo people swim in the Nile and absorb the heat in their homes with sacks of rice. In Tokyo they carry parasols. Farmers in Bukhara fear for their future, while in Jordan, refugees cover themselves with wet towels. And anyone who can relies on air conditioning (AC). Around the world, people are trying to cope with the intense and prolonged heat. As always, the most vulnerable in society – the homeless, the elderly, the poor or disenfranchised – are suffering the most. Guardian Cities is investigating heat in cities for a special week of journalism next month. Mahmoud Mohamed, 21, student, Cairo. I live in a house on Waraq Island, in the Nile, with my uncles, their families and grandparents. The family saved up and bought one AC unit for the living room; now that’s where everyone spends their day – preparing food, watching TV, playing or studying. My grandmother used to put the bedsheets in the fridge or the cooler, or hold a bag of cold water against our backs. Reported by Elle Hunt

There's No Scientific Basis for Race—It's a Made-Up Label This story is part of The Race Issue, a special issue of National Geographic that explores how race defines, separates, and unites us. In the first half of the 19th century, one of America’s most prominent scientists was a doctor named Samuel Morton. Morton lived in Philadelphia, and he collected skulls. He wasn’t choosy about his suppliers. He accepted skulls scavenged from battlefields and snatched from catacombs. One of his most famous craniums belonged to an Irishman who’d been sent as a convict to Tasmania (and ultimately hanged for killing and eating other convicts).

The book that fights sexism with science When young men and women come up against sexist stereotypes masquerading as science, Angela Saini wants them to be armed with the facts. “I call my book ammunition,” she says of her 288-page prize-winning work Inferior: The True Power of Women and the Science that Shows It. “There are people out there who insist that somehow the inequalities we see in society are not just because of historic discrimination, but also because of biology – the idea that there are factors within us that will cause men or women to be better at some things than others.” She wrote Inferior to demonstrate that “actually, science doesn’t support that point of view. I think it’s important we understand these scientific facts. We need that ammunition to counter the weird mistruths that are circulating within and outside science about sex difference”.

The 2018 Midterms and the Specter of Voter Suppression Read: The ‘hubris’ of the Supreme Court’s voting-rights ruling On Saturday, President Donald Trump ensured that the issue would be front and center as Election Day approached. “All levels of government and Law Enforcement are watching carefully for VOTER FRAUD, including during EARLY VOTING,” he tweeted. “Cheat at your own peril.

Google Just Gave 2 Billion Chrome Users A Reason To Switch To Firefox Berlin, Germany - February 26: In this photo illustration the app of Google Chrome is displayed on a smartphone on February 26, 2018 in Berlin, Germany. (Photo Illustration by Thomas Trutschel/Photothek via Getty Images) Getty Almost all world’s oceans damaged by human impact, study finds Just 13% of the world’s oceans remain untouched by the damaging impacts of humanity, the first systematic analysis has revealed. Outside the remotest areas of the Pacific and the poles, virtually no ocean is left harbouring naturally high levels of marine wildlife. Huge fishing fleets, global shipping and pollution running off the land are combining with climate change to degrade the oceans, the researchers found. Furthermore, just 5% of the remaining ocean wilderness is within existing marine protection areas.

Driven by Trump Policy Changes, Fracking Booms on Public Lands To proponents, the Trump administration is putting government-owned land to good use, with big returns for taxpayers. Nationally, oil production on federal lands is rising at an extraordinary pace, jumping 25 percent in the first seven months of this year compared with 2016, the last year of the Obama administration. That boom has driven up government revenue from lease sales and royalties collected from oil and gas production on federal lands, which is shared with the states. Wyoming received $669 million from federal oil, gas and coal sales last year, money it uses to help pay for its schools, roads and other needs.

Teachers' Strategies for Pronouncing and Remembering Students' Names Correctly The names of white and nonwhite children alike are mispronounced, Kohli and Solórzano write, but the experience is much more damaging for a child who “goes to school and reads textbooks that do not reference her culture, sees no teachers or administrators that look like her, and perhaps does not hear her home language,” since these cues (plus advertisements, movies and other indicators of societal values at large) already communicate “that who they are and where they come from is not important.” For one Latina study participant, having her name mispronounced made her wish her parents were more Americanized; a Sri Lankan American reported feeling that his name was “an imposition on others.” They’re not imagining things. Kathryn Campbell-Kibler, a sociolinguist at The Ohio State University, says the effort we put into overcoming a “barrier to communication” depends on (and communicates) social values.

More acidic oceans 'will affect all sea life' Image copyright JAGO-TEAM/GEOMAR All sea life will be affected because carbon dioxide emissions from modern society are making the oceans more acidic, a major new report will say. The eight-year study from more than 250 scientists finds that infant sea creatures will be especially harmed. 'I've paid a huge personal cost:' Google walkout organizer resigns over alleged retaliation A prominent internal organizer against Google’s handling of sexual harassment cases has resigned from the company, alleging she was the target of a campaign of retaliation designed to intimidate and dissuade other employees from speaking out about workplace issues. Claire Stapleton, a longtime marketing manager at Google and its subsidiary YouTube, said she decided to leave the company after 12 years when it became clear that her trajectory at the company was “effectively over”. “I made the choice after the heads of my department branded me with a kind of scarlet letter that makes it difficult to do my job or find another one,” she wrote in an email to co-workers announcing her departure on 31 May. “If I stayed, I didn’t just worry that there’d be more public flogging, shunning, and stress, I expected it.”