White House Slender Man: Because Jared Kushner's Early Crimes Went Unpunished, He Remained to Sabotage the Pandemic Response - PREVAIL by Greg Olear. THE SECOND BEST MOMENT to remove Jared Kushner from the White House has been every single day since he got there. 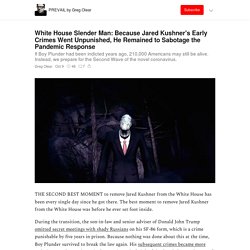 The best moment to remove Jared Kushner from the White House was before he ever set foot inside. During the transition, the son-in-law and senior adviser of Donald John Trump omitted secret meetings with shady Russians on his SF-86 form, which is a crime punishable by five years in prison. Because nothing was done about this at the time, Boy Plunder survived to break the law again. His subsequent crimes became more audacious. Jacobus: The Coming Monetization of Hope Hicks and Little White Lies. A nameless person on Twitter mused that the most recent in a long line of outgoing White House Communications Directors, Hope Hicks, never really has been a communications director, but rather her role was similar to that of the “comfort goat” placed in the stall of Secretariat to keep him calm. 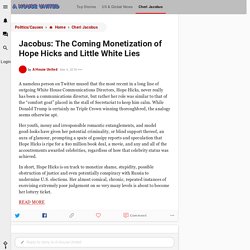 While Donald Trump is certainly no Triple Crown winning thoroughbred, the analogy seems otherwise apt. Her youth, messy and irresponsible romantic entanglements, and model good-looks have given her potential criminality, or blind support thereof, an aura of glamour, prompting a spate of gossipy reports and speculation that Hope Hicks is ripe for a $10 million book deal, a movie, and any and all of the accoutrements awarded celebrities, regardless of how that celebrity status was achieved. In short, Hope Hicks is on track to monetize shame, stupidity, possible obstruction of justice and even potentially conspiracy with Russia to undermine U.S. elections. 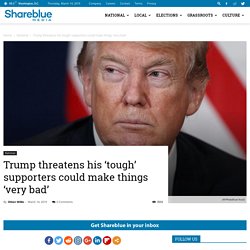 Trump once again made the disturbing suggestion that his right-wing supporters — including police officers and members of the military — might escalate their political disagreements with Trump's opponents into vigilante violence. The Year Long Trump Flunky Effort to Free Julian Assange. The Minutemen's Demise - The Investigative Fund. When Gina Gonzalez scrambled, limping, from the living room couch where her bleeding daughter lay dying to grab her husband's pistol from the kitchen, she was only intent on trying to stay alive. 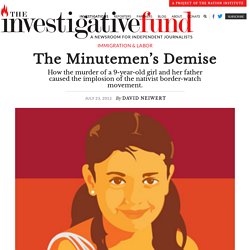 When she fired off a succession of rounds from the gun, huddled in a corner, her sole purpose was to drive out the gang of intruders posing as Border Patrol officers who, only minutes before, had entered their home and gunned down her husband, blasted her in the leg and chest, and then coldly shot her 9-year-old daughter, Brisenia, in the face as she pleaded for her life. Our partner. - The Washington Post. Paul Manafort's Stunning Decision to Help Robert Mueller. The agreement shows just how valuable Manafort could be to the government. 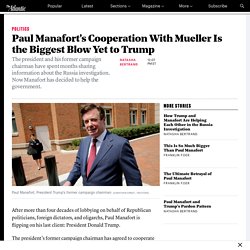 Among other matters, Mueller has been eyeing the meeting Waxman referenced, which Manafort, Donald Trump Jr., and Jared Kushner attended in June 2016 with Russian nationals offering dirt on Hillary Clinton. “This is also incredibly important because if the president were to pardon Manafort under these circumstances, the case against the president for obstruction of justice would be even more compelling,” Waxman said. “In short, this is a huge day for the government.” - The Washington Post. - The Washington Post. Michael Cohen's Ties to Russia, Crime and Trump.

I’ve Seen John Bolton Up Close. Yep, Be Afraid. My Goodness, Why Are We Being So Mean To That Nice Hope Hicks??? Interior mum on whether Zinke spent $139K on office door. The Daily 202: Peter Navarro gets his 15 minutes of fame as the salesman for the Trump tariffs. Peter Navarro speaks in the Oval Office during an executive order signing ceremony regarding trade last March. 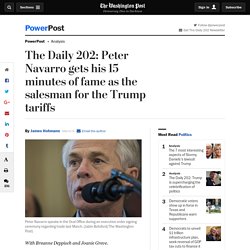 (Jabin Botsford/The Washington Post) With Breanne Deppisch and Joanie Greve. THE BIG IDEA: After being marginalized inside the White House over the past year, Peter K. Navarro has been taking a public victory lap to celebrate his success at persuading President Trump to announce tariffs on steel and aluminum imports. As rivals in the West Wing maneuver to defuse a looming trade war, thus far to no avail, Trump’s most protectionist adviser is celebrating what he sees as his greatest achievement. Navarro, the director of the White House’s Trade and Manufacturing Policy office, has become ubiquitous on television since last Thursday, in appearances that have been at turns triumphal and testy.

Navarro, 68, is a professor emeritus at the University of California at Irvine business school. ‘Jared has faded’: Inside the 28 days of tumult that left Kushner badly diminished. They were the ascendant young couples of the Trump White House: Jared Kushner and Ivanka Trump, and Rob Porter and Hope Hicks. 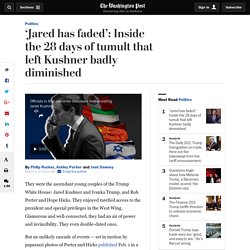 They enjoyed rarefied access to the president and special privileges in the West Wing. Glamorous and well-connected, they had an air of power and invincibility. They even double-dated once. But an unlikely cascade of events — set in motion by paparazzi photos of Porter and Hicks published Feb. 1 in a British tabloid — crashed down on Kushner this week. Pence was set to meet with North Korean officials during the Olympics before last-minute cancellation. The far-right smear campaign against students who survived the Parkland massacre. Students who survived the gun massacre at Marjory Stoneman Douglas High School have emerged as powerful advocates of gun control and fierce critics of the NRA. 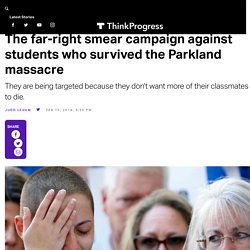 Now they are being targeted by a right-wing smear campaign. David Hogg, a senior at the school, was one of the first to appear on national television and demand action. “We’re children. You guys are the adults. You need to take some action and play a role. Hogg is now being targeted by Gateway Pundit, a far-right blog that has press credentials from the Trump White House. Wintrich says Hogg and other students throw up some “red flags.”