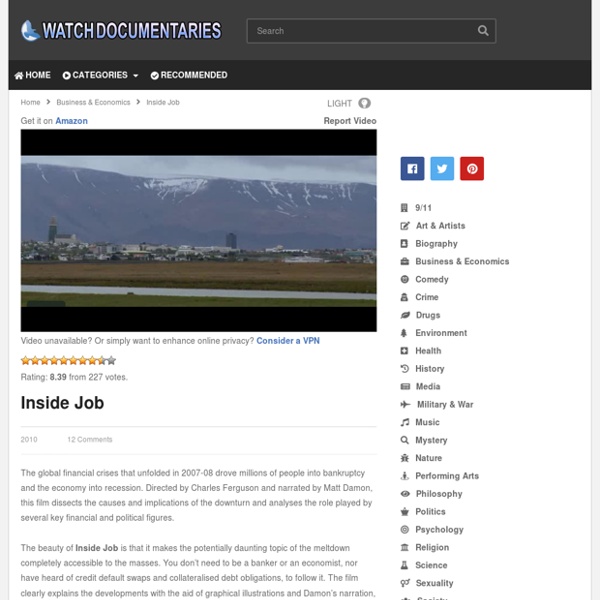 The global financial crises that unfolded in 2007-08 drove millions of people into bankruptcy and the economy into recession. Directed by Charles Ferguson and narrated by Matt Damon, this film dissects the causes and implications of the downturn and analyses the role played by several key financial and political figures. The beauty of Inside Job is that it makes the potentially daunting topic of the meltdown completely accessible to the masses. You don’t need to be a banker or an economist, nor have heard of credit default swaps and collateralised debt obligations, to follow it. The film clearly explains the developments with the aid of graphical illustrations and Damon’s narration, in an easy to digest manner. It is enjoyable to watch for both a finance layperson and a well-versed professional. Inside Job demonstrates how the American financial sector brought the country to the brink through reckless risk taking, complex financial structures, and sheer greed.

Related:  How it works • The Only Earth We Have • Economics and Inequality • Films - find something to watch • They are the Clear and Present Danger

DeVos reinstated for-profit college accreditor despite staff objections, report shows Education Secretary Betsy DeVos earlier this year reinstated an accreditor of for-profit colleges despite findings by her agency’s career staff that the organization failed to meet federal standards, an internal document shows. The report, released by the Education Department on Friday in response to a Freedom of Information Act lawsuit, shows that career department analysts had serious concerns about restoring the federal recognition of the Accrediting Council for Independent Colleges and Schools just a month before DeVos issued an order reinstating the accreditor’s federal status. Story Continued Below

The trouble with charitable billionaires In February 2017, Facebook’s founder and CEO Mark Zuckerberg was in the headlines for his charitable activities. The Chan Zuckerberg Initiative, founded by the tech billionaire and his wife, Priscilla Chan, handed out over $3m in grants to aid the housing crisis in the Silicon Valley area. David Plouffe, the Initiative’s president of policy and advocacy, stated that the grants were intended to “support those working to help families in immediate crisis while supporting research into new ideas to find a long-term solution – a two-step strategy that will guide much of our policy and advocacy work moving forward”. This is but one small part of Zuckerberg’s charity empire. The Initiative has committed billions of dollars to philanthropic projects designed to address social problems, with a special focus on solutions driven by science, medical research and education. This all took off in December 2015, when Zuckerberg and Chan wrote and published a letter to their new baby Max.

'Absolutely kills me': you pick your saddest movie scenes Dumbo When Dumbo is taken to see his caged mother. Song plays Baby Mine. Dumbo swings in mother’s trunk. 5 easy steps that explain just how out of bounds Donald Trump's FBI move really is But what Trump has done -- and is doing -- in regard to an FBI confidential source who had conversations with several people in his campaign orbit in 2016 is the sort of thing that should make every citizen stop short. This goes well beyond the standard-issue norm-shattering that Trump has made his regular operating procedure since he began running for president. This veers into the sort of line-crossing that has very real -- and frightening -- consequences for the democratic experiment.

Two Koch Insiders Are Creating a New Office Inside the FCC - TYT Network Federal Communication Commission Chairman Ajit Pai at the Conservative Political Action Conference (CPAC), February, 2018. Photo by Chip Somodevilla/Getty Images. By Alex Kotch Trump will personally save up to $15m under tax bill, analysis finds Donald Trump and six members of his inner circle will be big winners of the Republicans’ vast tax overhaul, with the president personally benefiting from a tax cut of up to $15m a year, research shows. The US president chalked up his first big legislative win on Wednesday with the $1.5tn bill, the most sweeping revamp of the tax code in three decades, slashing taxes for corporations and the wealthy and dealing the heaviest blow yet to Obamacare. But analysis by a leading Washington thinktank, the Center for American Progress (CAP), finds that changes to business rules will save Trump roughly $11m to $15m per year, while an amendment to the estate tax – the tax on the transfer of an estate of a deceased person – would potentially save his heirs $4.5m.

The US is stingier with child care and maternity leave than the rest of the world In most American families led by couples, both parents are in the workforce. At the same time, nearly 1 in 4 U.S. children are being raised by single moms. Yet child care is generally unaffordable and paid leave is not available to most U.S. parents.

Related:
Related:  How it works   -  The Only Earth We Have   -  Economics and Inequality   -  Films - find something to watch   -  They are the Clear and Present Danger