Republicans rigged our democracy. Here's how Democrats can fight back 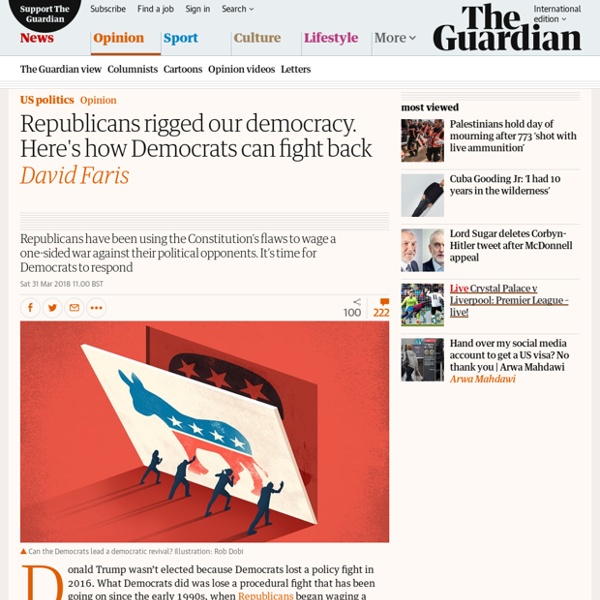 Donald Trump wasn’t elected because Democrats lost a policy fight in 2016. What Democrats did was lose a procedural fight that has been going on since the early 1990s, when Republicans began waging a relentless, brutal, and completely one-sided war, systematically using their lawmaking power to disadvantage their adversaries in elections and political mobilization. Gerrymandering, the Citizens United atrocity that declared money is speech, blocking US supreme court nominations and obstructing legislation are some of the Republican party’s tactics. Depraved, racist voter ID laws that obviously target people who are likely to vote Democratic, and the cruel way that many states prevent current or former felons from voting are others. Indeed, one has to grudgingly respect the single-mindedness with which the Republican party has pursued its advantage, even as we condemn the damage it has wreaked on our democracy. But the biggest problem is that it is underspecified.

Pope Francis' associates compare right-wing US Christians with jihadists - The i newspaper online iNews Two leading theologians close to Pope Francis have said that American evangelicals and hard-line Catholics have a worldview that is “not too far apart’’ from jihadists. Their article in the journal Civilta’ Cattolica, which has outraged religious conservatives in the US, goes on to accuse right-wing Catholics and Christians of making an unholy pact with President Trump, and of deepening political polarisation in the United States. Some experts have interpreted the article as a call from Pope Francis himself for the church to dissociate itself from the US administration’s right-wing policies on everything from climate change to migration.

My friend Denis Mukwege is a beacon for all men to follow Today’s announcement of the Nobel peace prize for Denis Mukwege, with co-winner Nadia Murad, is a deeply deserved recognition for an extraordinary man who has risked everything to heal, cherish and honour women. It is a call to men across the planet to do the same. There are many reasons why the world needs to know the story of my friend Mukwege, who founded the Panzi hospital and co-founded the City of Joy in the Democratic Republic of Congo. But in 2018, we need to hear that story more than ever. This week, the president of the United States mocked a survivor of sexual abuse in front of a crowd who jeered and laughed along with him.

Memo Restoring Use of Private Prisons Is Good News for One Company Memo Restoring Use of Private Prisons [...] Attorney General Jeff Sessions holds a meeting with the heads of federal law enforcement components at the Department of Justice Feb. 9, 2017 in Washington, DC. (Photo by Susan Walsh-Pool/Getty Images) Election interference has been going on for years. The reason? Voter purges In every American election there are some voters who show up to their polling place ready to cast a ballot, only to find their name isn’t on the registration list. The reason? Voter purges, an often flawed effort to update voter rolls by removing voters’ names from registration lists. I was an Isis sex slave. I tell my story because it is the best weapon I have The slave market opened at night. We could hear the commotion downstairs where militants were registering and organising, and when the first man entered the room, all the girls started screaming. It was like the scene of an explosion. We moaned as though wounded, doubling over and vomiting on the floor, but none of it stopped the militants.

Some States Spend Billions on Economic Tax Incentives for Little or No Return By one estimate, state and local governments spend at least $45 billion a year on tax breaks and other incentives to lure or keep job-producing businesses and plants in their jurisdictions. New York, for example, plows billions of dollars into the Empire State Development Corp. and Democratic Gov. Andrew Cuomo’s signature Start-Up NY program. We don’t want billionaires’ charity. We want them to pay their taxes “Charity is a cold, grey loveless thing. If a rich man wants to help the poor, he should pay his taxes gladly, not dole out money at a whim.” It is a phrase commonly ascribed to Clement Attlee – the credit actually belongs to his biographer, Francis Beckett – but it elegantly sums up the case for progressive taxation. According to a report by the Swiss bank UBS, last year billionaires made more money than any other point in the history of human civilisation.

The Eugenics Crusade Use one of the services below to sign in to PBS: You've just tried to add this video to your Watchlist so you can watch it later. But first, we need you to sign in to PBS using one of the services below. 60 Environmental Rules on the Way Out Under Trump 1. Revoked Obama-era flood standards for federal infrastructure projects This Obama-era rule, revoked by Mr. Trump in August, required that federal agencies protect new infrastructure projects by building to higher flood standards. Building trade groups and many Republican lawmakers opposed it as costly and burdensome.