I was an Isis sex slave. I tell my story because it is the best weapon I have 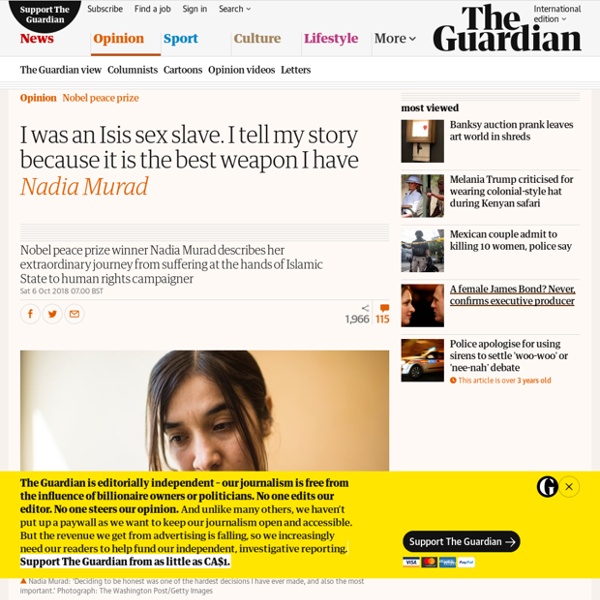 The slave market opened at night. We could hear the commotion downstairs where militants were registering and organising, and when the first man entered the room, all the girls started screaming. It was like the scene of an explosion. We moaned as though wounded, doubling over and vomiting on the floor, but none of it stopped the militants. They paced around the room, staring at us, while we screamed and begged. They gravitated toward the most beautiful girls first, asking, “How old are you?” It was chaos while the militants paced the room, scanning girls and asking questions in Arabic or the Turkmen language. “Calm down!” While I lay there, another militant stopped in front of us. His eyes were sunk deep into the flesh of his wide face, which seemed to be nearly entirely covered in hair. Attacking Sinjar [in northern Iraq] and taking girls to use as sex slaves wasn’t a spontaneous decision made on the battlefield by a greedy soldier. Nadia Murad eventually escaped her Isis captors.

Muslims lived in America before Protestantism even existed The first words to pass between Europeans and Americans (one-sided and confusing as they must have been) were in the sacred language of Islam. Christopher Columbus had hoped to sail to Asia and had prepared to communicate at its great courts in one of the major languages of Eurasian commerce. So when Columbus’s interpreter, a Spanish Jew, spoke to the Taíno of Hispaniola, he did so in Arabic. Not just the language of Islam, but the religion itself likely arrived in America in 1492, more than 20 years before Martin Luther nailed his theses to the door, igniting the Protestant reformation.

My friend Denis Mukwege is a beacon for all men to follow Today’s announcement of the Nobel peace prize for Denis Mukwege, with co-winner Nadia Murad, is a deeply deserved recognition for an extraordinary man who has risked everything to heal, cherish and honour women. It is a call to men across the planet to do the same. There are many reasons why the world needs to know the story of my friend Mukwege, who founded the Panzi hospital and co-founded the City of Joy in the Democratic Republic of Congo. But in 2018, we need to hear that story more than ever.

The backwards history of attitudes toward public breastfeeding Breastfeeding in public is the controversy that never seems to die. A recent YouTube video that went viral shows a woman breastfeeding in public. One passerby tells her “not to do that in public”; another that being in “a decent place” – a bus stop, in this case – means not breastfeeding there. Several others call her “disgusting.” Survivors of 9/11 attack urge Theresa May to release Saudi Arabia terror report she suppressed 1/92 18 July 2017 Giant pandas lie beside ice blocks at Yangjiaping Zoo in Chongqing, China. Yangjiaping Zoo provided huge ice blocks for giant pandas to help them remove summer heat Getty Images 2/92 18 July 2017 People ride camels in the desert in Dunhuang, China, as stage 10 of The Silkway Rally continues AFP/Getty Images 3/92 18 July 2017 17th FINA World Aquatics Championships in Budapest, Hungary.

'We have a duty to act': hundreds ready to go to jail over climate crisis A new group of “concerned citizens” is planning a campaign of mass civil disobedience starting next month and promises it has hundreds of people – from teenagers to pensioners – ready to get arrested in an effort to draw attention to the unfolding climate emergency. The group, called Extinction Rebellion, is today backed by almost 100 senior academics from across the UK, including the former archbishop of Canterbury Rowan Williams. In a letter published in the Guardian they say the failure of politicians to tackle climate breakdown and the growing extinction crisis means “the ‘social contract’ has been broken … [and] it is therefore not only our right, but our moral duty to bypass the government’s inaction and flagrant dereliction of duty, and to rebel to defend life itself.” “The planet is in ecological crisis – we are in the midst of the sixth mass extinction event this planet has experienced,” he said.

Thousands of ships could dump pollutants at sea to avoid dirty fuel ban Thousands of ships are set to install “emissions cheat” systems that pump pollutants into the ocean to beat new international rules banning dirty fuel. The global shipping fleet is rushing to meet a 2020 deadline imposed by the International Maritime Organization (IMO) to reduce air pollution by forcing vessels to use cleaner fuel with a lower sulphur content of 0.5%, compared with 3.5% as currently used. The move comes after growing concerns about the health impacts of shipping emissions.

In first, Japanese researchers observe chimp mother, sister caring for disabled infant A Japanese study of a chimpanzee mother caring for her disabled infant in the wild has shed light on how humans developed their social behavior. The first-of-its-kind study by a team of Kyoto University researchers was published Monday in the online edition of Primates, an international journal of primatology. Born in January 2011 in a chimpanzee group in Tanzania’s Mahale Mountains National Park, the female infant was “severely disabled,” exhibiting “symptoms resembling Down syndrome,” according to a summary of the team’s findings. The researchers said there have been only a few case studies of congenitally disabled chimpanzee infants and no reports examining how a chimpanzee mother in the wild copes with a disabled infant. Michio Nakamura, an associate professor at Kyoto University’s Wildlife Research Center who was involved in the study, told The Japan Times on Tuesday that the research could help solve the riddle of how humans evolved into social animals.

On Father's Day, 27 Vintage Photos of Dads Around the World As the U.S. prepares to celebrate Father’s Day on the third Sunday of June, these photos of dads around the world show that a father’s love is universal. Unlike Mother’s Day, which began to be widely observed in 1908 and was quickly recognized as an official national holiday by President Woodrow Wilson in 1914, Father’s Day took several decades to be declared a national holiday. It was first celebrated in 1910 in Washington state but wasn’t officially recognized until 1972, when it was acknowledged by President Richard Nixon. Studies have shown that beyond the ubiquitous parenting experiences of wiping away tears over a skinned knee or cheering on the sidelines of a sports game, dads can have specific and important impacts on the lives of their children. Fathers who do their share of work at home can help shape their daughters' career goals. Thank you for signing up!

Saudi Arabia, Exporter of Oil and Bigotry Photo A college senior boarded a flight and excitedly called his family to recount a United Nations event he had attended, but, unfortunately, he was speaking Arabic. Southwest Airlines kicked him off the plane, in the sixth case reported in the United States this year in which a Muslim was ejected from a flight. Such Islamophobia also finds expression in the political system, with Donald Trump calling for a temporary ban on Muslims entering the country (“Welcome to the U.S.A.! Eugenics - Finding Carrie Buck In November of 1924, two women pose for a picture outside the Virginia Colony for Epileptics and Feeble-Minded. Mother and daughter, they were separated some dozen years before, when municipal authorities decided that Emma Buck couldn’t provide adequate care for her little girl, Carrie, no more than six at the time. Despite the years apart, their relationship seems affectionate. Before the camera, Emma rests a hand on her daughter’s shoulder.

China’s Government Has Ordered a Million Citizens to Occupy Uighur Homes. Here’s What They Think They’re Doing. Often, the big brothers and sisters arrived dressed in hiking gear. They appeared in the villages in groups, their backpacks bulging, their luggage crammed with electric water-kettles, rice-cookers, and other useful gifts for their hosts. They were far from home and plainly a bit uncomfortable, reluctant to “rough it” such a long way from the comforts of the city.