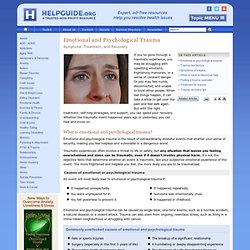 Emotional and psychological trauma is the result of extraordinarily stressful events that shatter your sense of security, making you feel helpless and vulnerable in a dangerous world. Traumatic experiences often involve a threat to life or safety, but any situation that leaves you feeling overwhelmed and alone can be traumatic, even if it doesn’t involve physical harm. It’s not the objective facts that determine whether an event is traumatic, but your subjective emotional experience of the event. The more frightened and helpless you feel, the more likely you are to be traumatized. Dr. Tian Dayton: Relationship Trauma: How Does Emotional Pain from Childhood Get Lived Out in Adulthood? We are constantly anticipating and tracking each other. 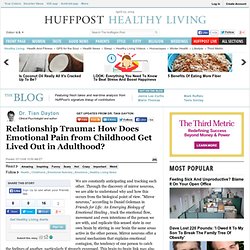 Through the discovery of mirror neurons, we are able to understand why and how this occurs from the biological point of view. "Mirror neurons," according to Daniel Goleman in Friends for Life: An Emerging Biology of Emotional Healing , track the emotional flow, movement and even intentions of the person we are with, and replicate this sensed state in our own brain by stirring in our brain the same areas active in the other person. Mirror neurons offer a neural mechanism that explains emotional contagion, the tendency of one person to catch the feelings of another, particularly if strongly expressed.

This brain-to-brain link may also account for feelings of rapport, which research finds depend in part on extremely rapid synchronization of people's posture, vocal pacing and movements as they interact. In short, these brain cells seem to allow the interpersonal orchestration of shifts in physiology. " Relationship Emergency - Stage 1 What is Trauma? Why heartbreak can leave us traumatized. What is Trauma? 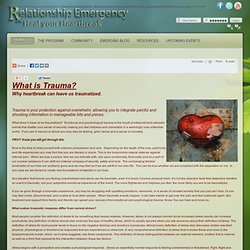 Argaiv1438 Why heartbreak can leave us traumatized. Trauma is your protection against overwhelm, allowing you to integrate painful and shocking information in manageable bits and pieces. Desire. Desire is a sense of longing or hoping for a person, object, or outcome. 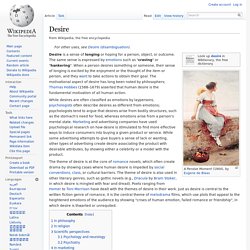 The same sense is expressed by emotions such as "craving" or "hankering". When a person desires something or someone, their sense of longing is excited by the enjoyment or the thought of the item or person, and they want to take actions to obtain their goal. The motivational aspect of desire has long been noted by philosophers; Thomas Hobbes (1588–1679) asserted that human desire is the fundamental motivation of all human action. While desires are often classified as emotions by laypersons, psychologists often describe desires as different from emotions; psychologists tend to argue that desires arise from bodily structures, such as the stomach's need for food, whereas emotions arise from a person's mental state.

Fear. A scared child shows fear in an uncertain environment. 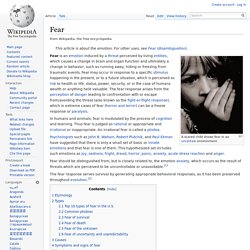 In humans and animals, fear is modulated by the process of cognition and learning. Thus fear is judged as rational or appropriate and irrational or inappropriate. An irrational fear is called a phobia. Fear should be distinguished from, but is closely related to, the emotion anxiety, which occurs as the result of threats which are perceived to be uncontrollable or unavoidable.[1] The fear response serves survival by generating appropriate behavioral responses, as it has been preserved throughout evolution.[2] Etymology[edit] The noun "fear" stems from the Middle English words feer, fere and fer, the Old English fǣr for "calamity" or "danger" (and its verb fǣran, "frighten", but also "revere") is related to the Proto-Germanic fērą, "danger", the Proto-Indo-European *per, "to attempt, try, research, risk". 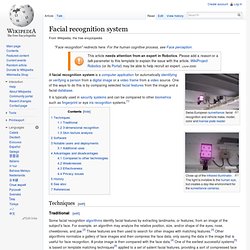 One of the ways to do this is by comparing selected facial features from the image and a facial database. It is typically used in security systems and can be compared to other biometrics such as fingerprint or eye iris recognition systems.[1] Techniques[edit] Social alienation. Distancing effect. The distancing effect, more commonly known (earlier) by John Willett's 1964 translation the alienation effect or (more recently) as the estrangement effect (German: Verfremdungseffekt), is a performing arts concept coined by playwright Bertolt Brecht. 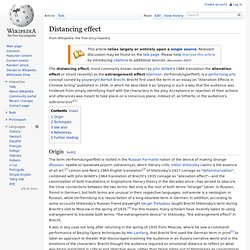 Brecht first used the term in an essay on "Alienation Effects in Chinese Acting" published in 1936, in which he described it as "playing in such a way that the audience was hindered from simply identifying itself with the characters in the play. Acceptance or rejection of their actions and utterances was meant to take place on a conscious plane, instead of, as hitherto, in the audience's subconscious"[1] Marx's theory of alienation. The 19th-century German intellectual K.H. 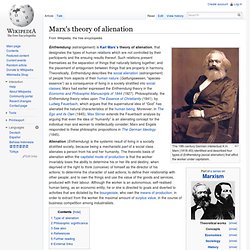 Marx (1818–83) identified and described four types of Entfremdung (social alienation) that afflict the worker under capitalism. Entfremdung (estrangement) is Karl Marx’s theory of alienation, that designates the types of human relations which are not controlled by their participants and the ensuing results thereof. Why are we afraid of other people Article. Intimidation. Intimidation (also called cowing) is intentional behavior that "would cause a person of ordinary sensibilities" to fear injury or harm. 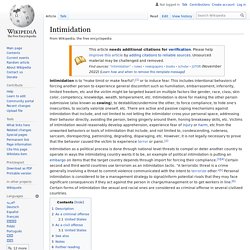 It is not necessary to prove that the behavior was so violent as to cause mean terror or that the victim was actually frightened.[1] Phobia. The terms distress and impairment as defined by the Diagnostic and Statistical Manual of Mental Disorders, Fourth Edition (DSM-IV-TR) should also take into account the context of the sufferer's environment if attempting a diagnosis. 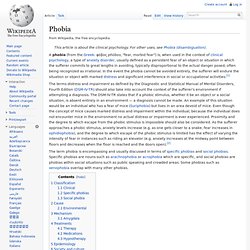 The DSM-IV-TR states that if a phobic stimulus, whether it be an object or a social situation, is absent entirely in an environment — a diagnosis cannot be made. An example of this situation would be an individual who has a fear of mice (Suriphobia) but lives in an area devoid of mice. Even though the concept of mice causes marked distress and impairment within the individual, because the individual does not encounter mice in the environment no actual distress or impairment is ever experienced. Proximity and the degree to which escape from the phobic stimulus is impossible should also be considered. Taijin kyofusho. Taijin kyofusho (対人恐怖症 taijin kyōfushō, TKS, for taijin kyofusho symptoms), is a Japanese culture-specific syndrome. The term taijin kyofusho translates into the disorder (sho) of fear (kyofu) of interpersonal relations (taijin).[1] This culture-bound syndrome is a social phobia dealing with social anxiety.

Those who have Taijin Kyofusho are likely to be extremely embarrassed of themselves or displeasing to others when it comes to the functions of their bodies or their appearances. These bodily functions and appearances include their faces, odor, actions, or even looks. Fear of People. Sexual attraction. This article is about sexual attraction among humans.

For sexual attraction among other animals, see Animal sexual behaviour. Sexual attraction is attraction on the basis of sexual desire or the quality of arousing such interest.[1][2] Sexual attractiveness or sex appeal is an individual's ability to attract the sexual or erotic interest of another person, and is a factor in sexual selection or mate choice. The attraction can be to the physical or other qualities or traits of a person, or to such qualities in the context in which they appear. The attraction may be to a person's aesthetics or movements or to their voice or smell, besides other factors. The attraction may be enhanced by a person's adornments, clothing, perfume, hair length and style, and anything else which can attract the sexual interest of another person.

Social and biological factors Human sexuality has many aspects. The mystery of monogamy: scientists claim to have the answer. As an enduring mystery of the human condition, it has been praised and damned in equal measure. It is a bridge over the abyss of isolation but can be a bit like croquet: easy enough to grasp the rules but a hard game to enjoy. The Halo Effect - Science of Attraction. Sexual Attraction and Body Language. Sexual Attraction (Human Instinct) A Healthy Dose of Vanity. March 2004 by Lisa Petty, BA, RHN It wasn’t skyrocketing blood pressure or the warning from his doctor to lose seventy pounds before his heart gave out that pushed David out of the fast-food line and onto the treadmill. Instead, it was a little white envelope that held an invitation to his high school reunion.

Then there was Sandra, a committed smoker despite losing her father to lung cancer. She finally quit when she noticed extra lines around her eyes and mouth from the constant squint and pucker. Since our youth, we have been taught that vanity isn’t a quality that others find attractive. Vanity also helps build self-esteem. Extraversion and introversion. 35 Quotes For Introverts. Susan Cain - Quiet: the power of introverts in a world that can't stop talking. RSA Shorts - The Power of Quiet. Quiz: are you an introvert? RSA Animate - The Power of Outrospection. University of Southampton. Outgoing people lead happier lives. Interpersonal relationship. Field of study[edit] The study of interpersonal relationships involves several branches of the social sciences, including such disciplines as sociology, psychology, anthropology, and social work.