'You can't escape the smell': mouse plague grows to biblical proportions across eastern Australia. Drought, fire, the Covid-19 pestilence and an all-consuming plague of mice. 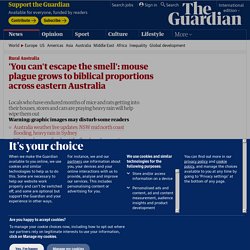 Rural New South Wales has faced just about every biblical challenge nature has to offer in the last few years, but now it is praying for another – an almighty flood to drown the mice in their burrows and cleanse the blighted land of the rodents. Or some very heavy rain, at least. It seems everyone in the rural towns of north-west NSW and southern Queensland has their own mouse war story. Rats raid a Chipotle, bite workers. In a brazen attack by desperate New York City rats a Washington Heights Chipotle Mexican restaurant became their best target, eventually forcing this popular food chain to shut down indefinitely. 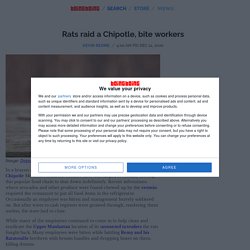 Recent infestations where avocados and other produce were found chewed up by the vermin required the restaurant to put all food items in the refrigerator. Occasionally an employee was bitten and management bravely soldiered on. But after wires to cash registers were gnawed through, rendering them useless, the store had to close. Meet the Two Scientists Who Implanted a False Memory Into a Mouse. It was the day before Christmas, and the normally busy MIT laboratory on Vassar Street in Cambridge was quiet. 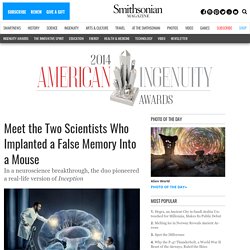 But creatures were definitely stirring, including a mouse that would soon be world famous. Steve Ramirez, a 24-year-old doctoral student at the time, placed the mouse in a small metal box with a black plastic floor. Instead of curiously sniffing around, though, the animal instantly froze in terror, recalling the experience of receiving a foot shock in that same box. Summer of the cannibal rats! Hungry, aggressive, highly fertile – and coming to our homes. Lockdown has been hard for rodents whose fortunes are tied to those of humans. 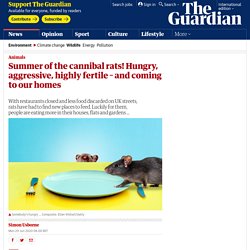 When restaurants closed, and city streets and back alleys emptied of people and their waste, rats lost a plentiful supply of food. So they followed us home, foraging and breeding in our gardens, drains and household voids. They became more brazen and aggressive. CDC warns of aggressive cannibal rats facing shortage of garbage to eat. The US Centers for Disease Control and Prevention has warned of “unusual or aggressive” behavior in American rats as a consequence of more than two months of human lockdown for city-dwelling rodents who now find themselves unable to dine out on restaurant waste, street garbage and other food sources. 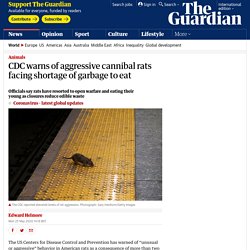 Last month, according to the national health body, dumpster-diving rats were observed resorting to eating their young in the wake of urban shutdowns. “Community-wide closures have led to a decrease in food available to rodents, especially in dense commercial areas,” the CDC said in recently updated rodent-control guidelines. “Some jurisdictions have reported an increase in rodent activity as rodents search for new sources of food. Environmental health and rodent control programs may see an increase in service requests related to rodents and reports of unusual or aggressive rodent behavior.” Some rodent experts predicted increased urban rat aggression. Beer and bagels please: New York rats evolve to mirror human habits. Humans are not alone in suffering from the stresses of modern city life. 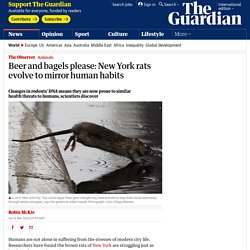 Researchers have found the brown rats of New York are struggling just as hard to adapt to urban existence. Indeed it is possible, they say, that both humans and rats have undergone parallel shifts in their genetic make-up in response to city life, leaving them prone to similar health threats, such as the effects of pollutants and the consumption of highly sugared foods. Meet the "werewolf mouse" who hunts scorpions and deadly centipedes and howls at the moon. Have you ever heard of the Grasshopper mouse? 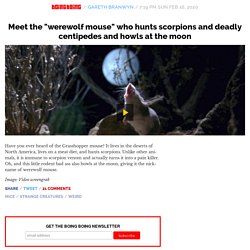 It lives in the deserts of North America, lives on a meat diet, and hunts scorpions. Unlike other animals, it is immune to scorpion venom and actually turns it into a pain killer. Oh, and this little rodent bad ass also howls at the moon, giving it the nickname of werewolf mouse. Rats — Quartz Daily Obsession. New York City turns to dry ice to control its rat population. Urban residents typically do their best to avoid rats. 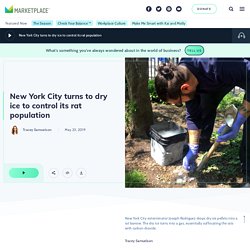 New York City exterminator Joseph Rodriguez seeks them out. He uses the handle of a shovel to shift the foliage in a neighborhood park, looking for small tunnels at the base of plants. When he finds the smooth opening of a rat burrow, he slides a few scoops of dry ice pellets into the opening, trailing foggy vapors. “If you pay attention to the burrows that are close by, you’ll see the vapors coming out from the other burrows,” he explained. Humans Are Driving the Evolution of Urban Rats. Scientists Taught Rats to Drive Tiny Cars for an Important Reason. But there's a way to counteract this effect: Lambert suggests we can change our brain's anatomy and chemistry through experiences. 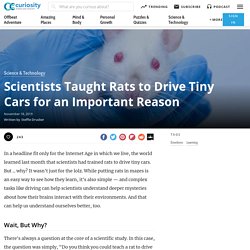 Interacting with nature or taking up a hobby, for example, have been found to be beneficial to the brain. "I think our brains still need doses of those old-fashioned rewards, kind of like mental health vitamins," she said. The driving-rats study has gone viral across news outlets worldwide since it first appeared in an article for New Scientist last month, and Lambert is using her overnight notoriety to educate others about brain plasticity and inspire change in her research area. Australian water rats cut cane toads open with 'surgical precision' to feast on their hearts.

Australian water rats have learned how to kill cane toads, eat their hearts and carve out their organs with “surgical precision”. 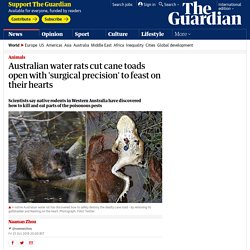 In only two years, highly intelligent native rakali in the Kimberly region of Western Australia discovered how to safely destroy the deadly toad – by removing its gallbladder and feasting on the heart. The rats even targeted the biggest, most poisonous toads they could find, leaving their bodies strewn by the riverside, according to research published in Australian Mammalogy. Cane toads were first introduced into Queensland in the 1930s and have been marching slowly west ever since, devastating native animals and driving them towards extinction. If You Haven’t Smiled Today, Meet Darius, The Rat Who Was Taught To Paint. We all have our talents and we should be proud of them. But when you’re a rat who paints, you should be… famous. And this little guy sure was. Darius the rat went viral on social media for his artistic abilities numerous times, and, even though he has passed away, his works still bring joy to people all over the world.

More info: Facebook | Twitter. When It Comes to the Black Death, the Rats May Have Been Framed. The Laboratory Rat: A Natural History. M. Berdoy. Oxford University. FULL & HD VERSION. Rats fight gone wild. Rats — Quartz Obsession. Sexual pleasure might help us learn – if rats are any guide. Atlasobscura. An (Almost) Comprehensive History of Rat Kings. Behold the rat king! A ball of furry fury, a rat king occurs when the tails of rodents become twisted, wrapped, and warped into a knot so impossible that not even the world's most loyal Boy Scout could untangle it.

Rat kings have been reported since the mid-16th century (almost entirely within Germany), and everything about them—from their name, to their cause, to their very existence—remains suspended in mystery. To start, the origin of the term rat king is hazy. It may be a mistaken translation of the French rouet de rats, a "wheel of rats" (rat king in French is roi-de-rats). Giant Rat That Fell From Sky in Solomon Islands Is New Species. By Jason Bittel For more than 20 years, people in the Solomon Islands have told scientists about huge rats that live in the treetops.

But no one could prove the creature actually existed—until November 2015, when loggers felled a 30-foot-tall tree on the island of Vangunu and a rat came crashing down with it. Unfortunately for this rodent of unusual size, the fall took its life. Atlasobscura. How Are Rats With No Y Chromosome Born Male? Log In - New York Times. In Defense of Studying City Rats.

This article was originally published on The Conversation. Read the original article. Death by dry ice: How cities are using a chilling killer to zap rats. Some of America’s biggest metros have begun using a chilling — and seemingly effective — new killing tool in the long and interminable urban war against rats: Dry ice. Does ‘humanizing’ mice for drug experiments pose ethical challenges? Scientists Unearth Fossils Of Rats The Size Of Small Dogs. This video demonstrates how rats can swim up your toilet bowl and will turn you into a life-long squatter. Scholarspace.manoa.hawaii.edu/bitstream/handle/10125/3382/v23n3-265-275.pdf?sequenc.. Study reveals rats show regret, a cognitive behavior once thought to be uniquely human. 8-Jun-2014. Will Giant Mutant Rats overrun NYC in Sandy’s wake. Mapping New York City's Rats. DOHMH Rat Information Portal. Did NYC rats survive hurricane Sandy?

Floodwaters enter Hugh L. Mapping the Rats in New York City. Michael Mills, a veteran health inspector in New York City, helps create a map of the city you won't find in any guidebook: a rat map. That's right, a map of the New York neighborhoods that rodent populations call home. The city's rat map was first introduced a year ago, with an intensive pilot program in the Bronx.