Welcome Back to Kissinger’s World. You can hate Henry Kissinger and think him evil. 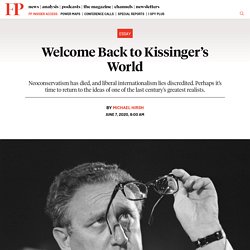 What you can’t do is ignore him—especially now. The Myth of Henry Kissinger. In 1952, at the age of twenty-eight, Henry Kissinger did what enterprising graduate students do when they want to hedge their academic future: he started a magazine. 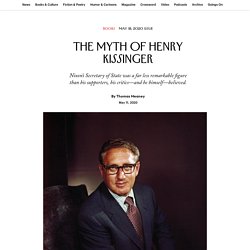 He picked an imposing name—Confluence—and enlisted illustrious contributors: Hannah Arendt, Raymond Aron, Lillian Smith, Arthur Schlesinger, Jr., Reinhold Niebuhr. The publisher James Laughlin, who was a backer of the magazine, described the young Kissinger as “a thoroughly sincere person (terribly earnest Germanic type) who is trying his hardest to do an idealistic job.” Like his other early production, the Harvard International Seminar, a summer program that convened participants from around the world—Kissinger gamely volunteered to spy on attendees for the F.B.I. For Cold War liberals, who saw the stirrings of fascism in everything from McCarthyism to the rise of mass culture, Weimar was a cautionary tale, conferring a certain authority on those who had survived.

They died for Henry Kissinger’s “credibility”: The real history of our Vietnam immorality. Détente with the Soviet Union and the opening to China were significant breakthroughs in their own right. 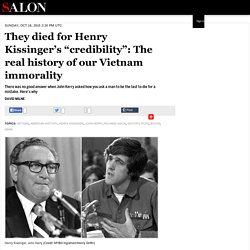 Indeed, a positive appraisal of the Nixon administration’s foreign policies is predicated on our viewing them this way. But Richard Nixon and Henry Kissinger did not view them in isolation at the time. Instead, both men believed that Moscow and Beijing, keen to extract economic and strategic benefits from an improved relationship with Washington, would apply pressure on Hanoi to agree to peace terms permitting a full American withdrawal.

On this topic their reasoning was misguided. It did not accord sufficient respect to North Vietnam’s fiercely guarded status as an independent actor, or indeed to the ideological solidarity that existed on at least a bilateral basis between Hanoi and its two Marxist-Leninist patrons. So when the United States withdrew from Vietnam in January 1973, when “peace” was finally achieved, it came at a horrendous cost. Kissinger poisoned the Middle East: America is living in a quagmire of his making. The only person Henry Kissinger flattered more than President Richard Nixon was Mohammad Reza Pahlavi, the Shah of Iran. 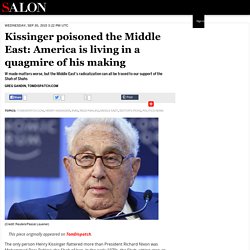 In the early 1970s, the Shah, sitting atop an enormous reserve of increasingly expensive oil and a key figure in Nixon and Kissinger’s move into the Middle East, wanted to be dealt with as a serious person. He expected his country to be treated with the same respect Washington showed other key Cold War allies like West Germany and Great Britain. Henry Kissinger Telcons Released by Court Order on 1 August 2015. Washington, D.C., August 19, 2015 – President Gerald Ford was "offended" and Secretary of State Henry Kissinger "almost blind with rage" over Israeli negotiating behavior in 1975, according to newly released Kissinger telephone transcripts obtained through a Freedom of Information Act lawsuit and posted today by the National Security Archive. 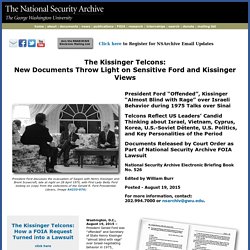 The Ivy League’s favorite war criminal: Why the atrocities of Henry Kissinger should be mandatory reading. Ex-government officials have always occupied a particular sweet spot for members the Ivy League. 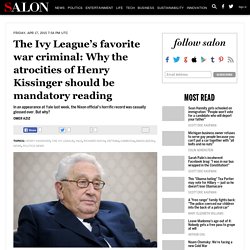 Regardless of what one did while in power, regardless of how disreputable or immoral or even criminal one’s actions, the elite academy has been all too willing to embrace even the most dubious of former officials. So it was that last Friday night, Henry Kissinger spoke at Yale — to which he has donated an archive of personal documents, where he occasionally participates in a course with Cold War historian John Lewis Gaddis, and where he give an invite-only talk just a year ago.

Last week’s “conversation” was moderated by Harvard Professor Niall Ferguson, who is also Henry Kissinger’s official biographer. At least members of the Yale community would be allowed to ask questions of Mr. Kissinger, challenge him on his public record, and dispute the wrongheaded assessment of the US-Iran nuclear deal he penned in the The Wall Street Journal just days prior, right? 1.

Henry Kissinger’s dark secret: Why the warmonger’s even worse than we thought. Heinz Alfred Kissinger, the man better known as Henry who served as perhaps the chief architect of U.S. foreign policy from 1969 to 1977, is 91 years old. 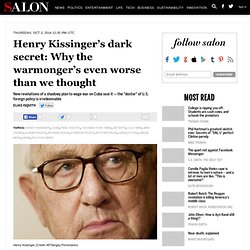 Henry Kissinger on the Assembly of a New World Order - WSJ. Declassified Documents Show Henry Kissinger's Major Role in the 1974 Initiative That Created the Nuclear Suppliers Group. Kissinger Favored Efforts to Curb Nuclear Proliferation in Concert with Other Powers, But Did Not Want U.S. to "Go Charging Around the World, Like Don Quixote" State Department Advisers Warned That New Nuclear-armed Nations or "Even Subnational Groups" Could "Threaten the United States with Nuclear Violence," Which Would Require "Extensive and Costly Restructuring" of the U.S. 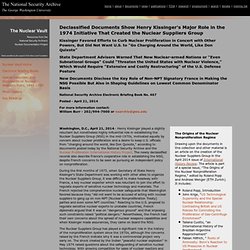 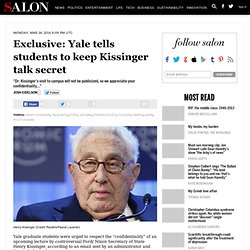 “Dr. Kissinger’s visit to campus will not be publicized, so we appreciate your confidentiality with respect to this exciting opportunity,” states an all-bold paragraph sent by Larisa Satara, the associate director of Yale’s Jackson Institute for Global Affairs, to a private listserv for Yale history graduate students. The email, sent Monday morning, also tells students that the event “is BY INVITE only”; “There will be a check list at the front door”; “Laptops are not permitted and Yale ID will be required for entry”; “This is a high security event”; and “All attendees will be expected to remain in their seats for the duration of the event …” Kissinger’s address, scheduled for 3:30 p.m. 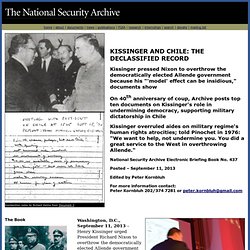 Joyce Horman, Peter Kornbluh, and Joan Jara, widow of Victor Jara (photo credit: Gabriela Vega). On September 9, 2013, Peter Kornbluh moderated the "Taking Accountability to the Top for Human Rights Crimes" panel discussion for the Charles Horman Truth Foundation's Tribute to Justice event. Peter Kornbluh, Jennifer Harbury, Judge Guzman, Peter Weiss, Reed Brody (photo credit: Gabriela Vega). Washington, D.C., September 11, 2013 – Henry Kissinger urged President Richard Nixon to overthrow the democratically elected Allende government in Chile because his "'model' effect can be insidious," according to documents posted today by the National Security Archive. The coup against Allende occurred on this date 40 years ago. Henry Kissinger Jokes About Making a Pawn of Bobby Fischer. Fischer and Spassky at the 1972 World Chess Championship. Kissinger’s call to Fischer motivated him to show up to the match. Chess was always an apt metaphor for the Cold War, and the significance of Bobby Fischer beating Soviet Boris Spassky in the 1972 World Chess Championship –ending 24 years of Soviet domination of the event, has been well documented.

It has also been noted that Henry Kissinger got involved, urging the increasingly recalcitrant Fischer to play in the event. Though declassified documents take it a step further, showing Kissinger joking about playing Fischer’s involvement in the tournament for a potential Cold War advantage. Henry Kissinger Confronted While Receiving The Freedom Award. Kissinger Instructs Palin On Finer Points Of Clandestine Carpet Bombing. WASHINGTON—In preparation for her debate with Sen. Joe Biden next week, Republican vice presidential nominee Sarah Palin met with seasoned statesman and Nobel Peace Prize–winner Henry Kissinger yesterday to take advantage of his extensive foreign policy knowledge and expertise in carpet-bombing innocent civilians in nations with which the U.S. is not officially at war. "Dr. Kissinger has given Gov. Palin thorough instructions for launching deadly covert military operations in tiny Southeast Asian countries in blatant disregard for human life and international law," said McCain campaign spokesperson Tracey Schmitt of Palin's brief consultation with the Nixon and Ford administrations' former secretary of state and national security adviser.

"In addition, the governor now feels completely confident that, if she is ever required to step in for Sen. The Top 10 Most Inhuman Henry Kissinger Quotes. Henry Kissinger's quote released by Wikileaks, "The illegal we do immediately; the unconstitutional takes a little longer," likely brought a smile to his legions of elite media, government, corporate and high society admirers.