If Brett Kavanaugh makes it through, women’s anger will be unstoppable 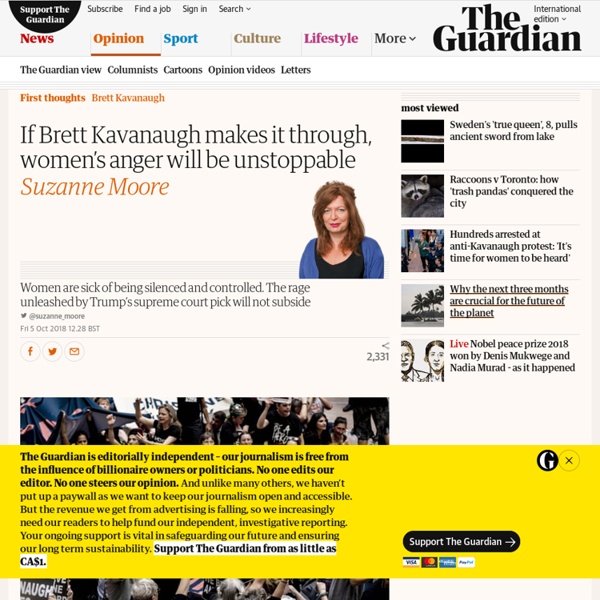 “Do you want to be arrested?” the cop asks Amy Schumer. “Yes” she says simply. She was one of the 302 women held after protesting at a Senate office building against the likely confirmation of Brett Kavanaugh to the US supreme court. They were arrested for “unlawfully demonstrating”. One of the chants in the crowd was: “This is what democracy looks like.” What does it take to be believed? The FBI did not believe it needed to speak to her again. We understand that it is entirely permissible these days for the president of America to parade his disrespect at rallies, to mock Ford’s testimony, to insult female reporters as a row of silent men stand behind him. If Kavanaugh is confirmed, though more than 2,000 law professors have signed a letter questioning his suitability in terms of temperament to be a judge at all, a very direct message is being sent out to women: that the ranks of patriarchy will close to block women’s voices. This is where we join the dots.

My friend Denis Mukwege is a beacon for all men to follow Today’s announcement of the Nobel peace prize for Denis Mukwege, with co-winner Nadia Murad, is a deeply deserved recognition for an extraordinary man who has risked everything to heal, cherish and honour women. It is a call to men across the planet to do the same. There are many reasons why the world needs to know the story of my friend Mukwege, who founded the Panzi hospital and co-founded the City of Joy in the Democratic Republic of Congo. But in 2018, we need to hear that story more than ever. This week, the president of the United States mocked a survivor of sexual abuse in front of a crowd who jeered and laughed along with him. Violence against women and the rampant misogyny that fuels it is resurgent all over the world.

Supreme Court to Hear Cases That Affect Older Workers The U.S. Supreme Court started its 2018 term this week. The eight justices currently on the court will hear arguments in several cases that could affect the rights of older workers. Among the key issues in those suits are: I was an Isis sex slave. I tell my story because it is the best weapon I have The slave market opened at night. We could hear the commotion downstairs where militants were registering and organising, and when the first man entered the room, all the girls started screaming. It was like the scene of an explosion. We moaned as though wounded, doubling over and vomiting on the floor, but none of it stopped the militants. They paced around the room, staring at us, while we screamed and begged.

The Eugenics Crusade Use one of the services below to sign in to PBS: You've just tried to add this video to your Watchlist so you can watch it later. But first, we need you to sign in to PBS using one of the services below. You’ll be able to manage videos in your Watchlist, keep track of your favorite shows, watch PBS in high definition, and much more! Brett Kavanaugh: Trump’s nominee threatens the Supreme Court itself The Brett Kavanaugh Supreme Court nomination has become a crisis of conscience for America: a test of whether sexual assault allegations against a powerful man are taken seriously by the Senate, of just how real the broader post-#MeToo awakening is. But for the Supreme Court, it’s a sign of a different kind of crisis on the horizon: a crisis of legitimacy. The American public has long had a deep and abiding faith in the Supreme Court as the last say in our public legal disputes. This faith survived controversial cases, like Roe v. Wade and Bush v.

Monty Python's Eric Idle Looks Back On The 'Bright Side' Of A Life In Comedy Monty Python co-founder Eric Idle's memoir "Always Look on the Bright Side of Life: A Sortabiography" comes out Tuesday. Here & Now's Robin Young talks with Idle (@EricIdle) about the book. Scroll down to read an excerpt from "Always Look on the Bright Side of Life" Interview Highlights 'We have a duty to act': hundreds ready to go to jail over climate crisis A new group of “concerned citizens” is planning a campaign of mass civil disobedience starting next month and promises it has hundreds of people – from teenagers to pensioners – ready to get arrested in an effort to draw attention to the unfolding climate emergency. The group, called Extinction Rebellion, is today backed by almost 100 senior academics from across the UK, including the former archbishop of Canterbury Rowan Williams. In a letter published in the Guardian they say the failure of politicians to tackle climate breakdown and the growing extinction crisis means “the ‘social contract’ has been broken … [and] it is therefore not only our right, but our moral duty to bypass the government’s inaction and flagrant dereliction of duty, and to rebel to defend life itself.” “The planet is in ecological crisis – we are in the midst of the sixth mass extinction event this planet has experienced,” he said. “To put it simply,” he said, “we’re fucked. But Hallam remains undeterred.

Berkeley police posted activists' mugshots on Twitter and celebrated retweets, emails reveal A California police agency that published the names and photos of anti-fascist protesters on Twitter said it was creating a “counter-narrative” on social media and celebrated its high rate of retweets and “engagement”, internal records reveal. The Berkeley police department (BPD) faced widespread backlash last month after posting the personal information of arrested activists online, leading to Fox News coverage and harassment and abuse against the leftwing demonstrators at a far-right rally. New emails have shown that the city has an explicit policy of targeting protesters with mugshot tweets, with the goal of using “social media to help create a counter-narrative”. Officials have further praised the “unusually deep and broad publication and attention” to activists’ mugshots, saying it helped create a “narrative about the city’s ability to enforce the rule of law”.

Dear Christine Blasey Ford: you are a welcome earthquake Dear Dr Christine Blasey Ford I am writing to thank you. No matter how harrowing your experience, no matter what the US Senate does in the weeks to come, you have achieved something profound in its power and impact, something that benefits all of us. For there are two arenas in which your words will reverberate – the Senate, and the immeasurably vast realm of public discourse and societal values. Even if your words, like Anita Hill’s, are discounted in the former, they will echo in the latter for a long time to come.

Eugenics - Finding Carrie Buck In November of 1924, two women pose for a picture outside the Virginia Colony for Epileptics and Feeble-Minded. Mother and daughter, they were separated some dozen years before, when municipal authorities decided that Emma Buck couldn’t provide adequate care for her little girl, Carrie, no more than six at the time. Despite the years apart, their relationship seems affectionate. Before the camera, Emma rests a hand on her daughter’s shoulder. Now 18, Carrie has recently been separated from her own daughter. That child, born out of wedlock, has been adopted by the Dobbs family — the same people who fostered Carrie.

Latinos and the Consequences of Eugenics By Natalie Lira In February 1930, Concepcion Ruiz, a 16-year-old Mexican-American, was arrested and tried in California Juvenile Court on charges of sexual delinquency. Legal officers brought the young woman before Superior Court Judge Robert H. Scott because she ran away with a boyfriend and was allegedly “subnormal.”