I'm a millionaire who creates zero jobs. Why do I pay less tax than you? 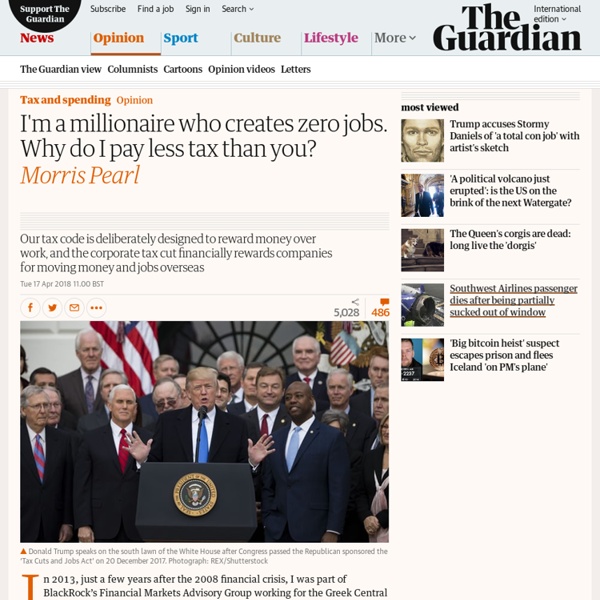 In 2013, just a few years after the 2008 financial crisis, I was part of BlackRock’s Financial Markets Advisory Group working for the Greek Central Bank, assessing the capital requirements of the bailouts of the Greek banks. I was on the top floor of a bank building in Athens with about 20 bank executives taking a lunch break, when I glanced out the window and saw a huge crowd of people on the street. For a moment I thought it was a parade, and then I realized it was something between a protest and a riot. As I looked out the window to the heated crowd below, and looked behind me to the well–fed bankers at the table, I wondered if I was actually helping anyone beyond the people having lunch with me. A few months later, I left a 30-year career on Wall Street to work full time as chair of the board of the Patriotic Millionaires. I haven’t looked back since. There’s a Greek proverb that goes: “A society grows great when old men plant trees whose shade they know they will never sit in.”

Related:  Contemporary History • Oh Dear, Things are not right • Inequality About wealth not Worth

My friend Denis Mukwege is a beacon for all men to follow Today’s announcement of the Nobel peace prize for Denis Mukwege, with co-winner Nadia Murad, is a deeply deserved recognition for an extraordinary man who has risked everything to heal, cherish and honour women. It is a call to men across the planet to do the same. There are many reasons why the world needs to know the story of my friend Mukwege, who founded the Panzi hospital and co-founded the City of Joy in the Democratic Republic of Congo. But in 2018, we need to hear that story more than ever. This week, the president of the United States mocked a survivor of sexual abuse in front of a crowd who jeered and laughed along with him.

America once fought a war against poverty – now it wages a war on the poor In 2013, Callie Greer’s daughter Venus died in her arms after a battle with breast cancer. If caught early, the five-year survival rate for women diagnosed with breast cancer is close to 100%. But Venus’s cancer went undiagnosed for months because she couldn’t afford health insurance. She lived in Alabama, a state that refused to expand Medicaid under the Affordable Care Act. Venus’s death is not an isolated incident – more than 250,000 people like her die in the United States from poverty and related issues every year.

Election interference has been going on for years. The reason? Voter purges In every American election there are some voters who show up to their polling place ready to cast a ballot, only to find their name isn’t on the registration list. The reason? Voter purges, an often flawed effort to update voter rolls by removing voters’ names from registration lists. I was an Isis sex slave. I tell my story because it is the best weapon I have The slave market opened at night. We could hear the commotion downstairs where militants were registering and organising, and when the first man entered the room, all the girls started screaming. It was like the scene of an explosion. We moaned as though wounded, doubling over and vomiting on the floor, but none of it stopped the militants.

Richest 1% on target to own two-thirds of all wealth by 2030 The world’s richest 1% are on course to control as much as two-thirds of the world’s wealth by 2030, according to a shocking analysis that has lead to a cross-party call for action. World leaders are being warned that the continued accumulation of wealth at the top will fuel growing distrust and anger over the coming decade unless action is taken to restore the balance. An alarming projection produced by the House of Commons library suggests that if trends seen since the 2008 financial crash were to continue, then the top 1% will hold 64% of the world’s wealth by 2030. Even taking the financial crash into account, and measuring their assets over a longer period, they would still hold more than half of all wealth. Since 2008, the wealth of the richest 1% has been growing at an average of 6% a year – much faster than the 3% growth in wealth of the remaining 99% of the world’s population. Should that continue, the top 1% would hold wealth equating to $305tn (£216.5tn) – up from $140tn today.

We don’t want billionaires’ charity. We want them to pay their taxes “Charity is a cold, grey loveless thing. If a rich man wants to help the poor, he should pay his taxes gladly, not dole out money at a whim.” It is a phrase commonly ascribed to Clement Attlee – the credit actually belongs to his biographer, Francis Beckett – but it elegantly sums up the case for progressive taxation. According to a report by the Swiss bank UBS, last year billionaires made more money than any other point in the history of human civilisation. The Eugenics Crusade Use one of the services below to sign in to PBS: You've just tried to add this video to your Watchlist so you can watch it later. But first, we need you to sign in to PBS using one of the services below. The US is stingier with child care and maternity leave than the rest of the world In most American families led by couples, both parents are in the workforce. At the same time, nearly 1 in 4 U.S. children are being raised by single moms. Yet child care is generally unaffordable and paid leave is not available to most U.S. parents. Around the world, however, most employed women automatically get paid maternity leave.

Related:
Related:  Contemporary History   -  Oh Dear, Things are not right   -  Inequality About wealth not Worth