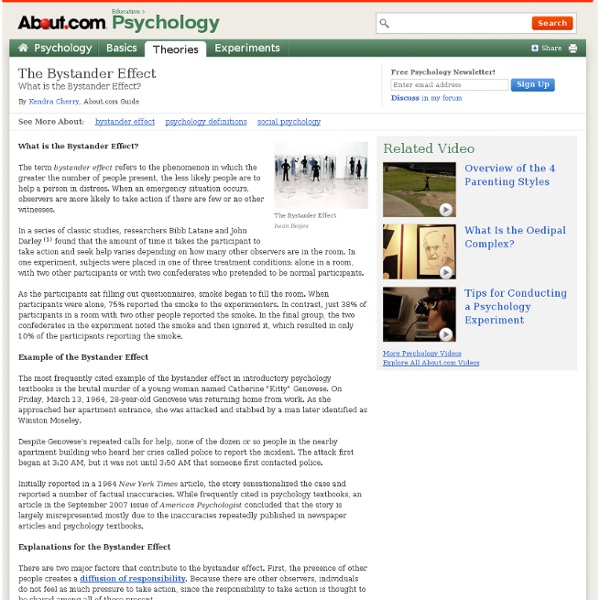 What is the Bystander Effect? The term bystander effect refers to the phenomenon in which the greater the number of people present, the less likely people are to help a person in distress. When an emergency situation occurs, observers are more likely to take action if there are few or no other witnesses. In a series of classic studies, researchers Bibb Latane and John Darley (1) found that the amount of time it takes the participant to take action and seek help varies depending on how many other observers are in the room. In one experiment, subjects were placed in one of three treatment conditions: alone in a room, with two other participants or with two confederates who pretended to be normal participants. As the participants sat filling out questionnaires, smoke began to fill the room. Example of the Bystander Effect The most frequently cited example of the bystander effect in introductory psychology textbooks is the brutal murder of a young woman named Catherine "Kitty" Genovese. Related:  Psycho

The 12 Common Archetypes The 12 Common Archetypes By Carl Golden The term "archetype" has its origins in ancient Greek. The psychologist, Carl Gustav Jung, used the concept of archetype in his theory of the human psyche. Although there are many different archetypes, Jung defined twelve primary types that symbolize basic human motivations. Most, if not all, people have several archetypes at play in their personality construct; however, one archetype tends to dominate the personality in general. Return Home

The Fear of Hurting the Other and the Inhibition of Self Click here to contact Beverly and/or see her GoodTherapy.org Profile Even when it is unintended, some people find it intolerable to hurt someone they love. To experience hurting the other can create shame, guilt and strong “I am a bad person” feelings. As a result, we may avoid saying what is on our mind and put aside our own feelings and needs. This inhibiting of the self can be harmful to our relationships and can create the conditions for developing anxiety and depression. Marlene, a 27 year old married woman, came into my therapy office feeling anxious and depressed. What Marlene described to me suggested that she had issues she needed to work on as an individual and that as we did this she would be more able to address the difficulties in her relationship with Ben. While Ben might be particularly subject to feeling hurt or slighted, Marlene’s inability to tolerate hurting Ben and talk with him about these issues, made the relationship difficult. Find the Right Therapist

The Science of Loneliness: How Isolation Can Kill You Sometime in the late ’50s, Frieda Fromm-Reichmann sat down to write an essay about a subject that had been mostly overlooked by other psychoanalysts up to that point. Even Freud had only touched on it in passing. She was not sure, she wrote, “what inner forces” made her struggle with the problem of loneliness, though she had a notion. Fromm-Reichmann would later become world-famous as the dumpy little therapist mistaken for a housekeeper by a new patient, a severely disturbed schizophrenic girl named Joanne Greenberg. Her 1959 essay, “On Loneliness,” is considered a founding document in a fast-growing area of scientific research you might call loneliness studies. In a way, these discoveries are as consequential as the germ theory of disease. The psychological definition of loneliness hasn’t changed much since Fromm-Reichmann laid it out. Today’s psychologists accept Fromm-Reichmann’s inventory of all the things that loneliness isn’t and add a wrinkle she would surely have approved of.

The Psychology of Our Willful Blindness and Why We Ignore the Obvious at Our Peril by Maria Popova How to counter the gradual narrowing of our horizons. “Keep your baby eyes (which are the eyes of genius) on what we don’t know,” pioneering investigative journalist Lincoln Steffens wrote in a beautiful 1926 letter of life-advice to his baby son. And yet the folly of the human condition is precisely that we can’t know what we don’t know — as E.F. In Willful Blindness: Why We Ignore the Obvious at Our Peril (public library), serial entrepreneur and author Margaret Heffernan examines the intricate, pervasive cognitive and emotional mechanisms by which we choose, sometimes consciously but mostly not, to remain unseeing in situations where “we could know, and should know, but don’t know because it makes us feel better not to know.” Heffernan explores the “friendly alibis” we manufacture for our own inertia — the same ones fueling the “backfire effect” that explains why it’s so hard for us to change our minds. Illustration from 'How To Be a Nonconformist,' 1968.

7 Things You Need to Know About Narcissists, From A Psychologist's Perspective Narcissists are everywhere, and they can be incredibly draining and challenging to deal with. Here are 7 things you need to know about narcissists, written from my perspective as a social psychologist and also inspired by my personal experiences with narcissists in my daily life. 1. A Significant Portion of the US Population are Narcissists An estimated 6.2% of the US population suffers from narcissistic personality disorder (NPD), meaning they meet five or more of the following criteria according to the DSM-V: (as you read these, think about people you may know who might fit with the diagnosis) Many more people do not meet all of the criteria for NPD, but may still exhibit narcissistic personality traits from time to time. 2. Is narcissism an inherited genetic trait? 3. Recent research in psychology shows that narcissism has been on the rise during the last 30 years, especially among young people. 4. 5. 6. Ask Them Questions (Narcissists Like to Talk but not to Listen) 7. Dr.

Some Scientists Believe Loneliness is Becoming an Epidemic by Natalie Shoemaker More and more adults report feeling lonely. It's not just the elderly, but younger adults 18 to 24 that are reporting these feelings of isolation. Humans are social creatures--we thrive in groups and decline when we're alone for too long, often becoming depressed. In nature, fish on the edge of the school are more likely to be attacked by predators, so their sense of self-preservation heightens. People can become socially withdrawn over time, which can make them hostile toward others. The Cacioppos report that therapies to reduce these feelings have had little effect on people's isolated states. "Given the scale of the problem today, the hunt for better treatments of all types deserves high priority." Loneliness has become a real threat to our health. Read more at New Scientist Read more at Psych Central Photo Credit: Geraint Rowland/Flickr