The Wall is Killing People - by Stats 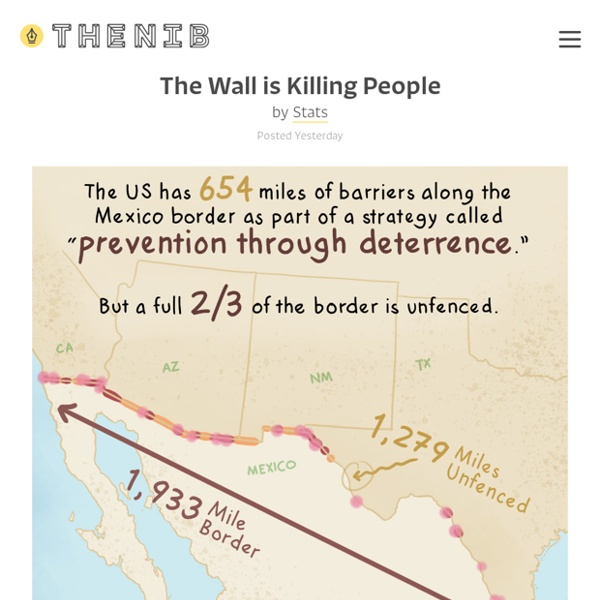 Donald Trump fans cry betrayal as he rebukes Capitol violence Donald Trump’s belated “concession” to a peaceful and orderly transition of power after the storming of the US Capitol has provoked anger and conspiracy theories among some of his most ardent followers. On social media channels and chatrooms like Parler and 4chan, where far-right Trumpists have gravitated as other social media sites have increasingly shut out the president, there were complaints of betrayal. Trump claimed on Thursday that he was “outraged by the violence, lawlessness and mayhem” of the Capitol siege that he had incited, and said those who “broke the law will pay” – comments that perhaps reflected concern over mounting legal and political hazard rather than a newfound sense of contrition and integrity. Nevertheless they prompted an outpouring of anger, grief and denial from his hardline acolytes. “A punch in the gut,” said one. “A stab in the back,” another railed.

Revealed: FBI investigated civil rights group as 'terrorism' threat and viewed KKK as victims The FBI opened a “domestic terrorism” investigation into a civil rights group in California, labeling the activists “extremists” after they protested against neo-Nazis in 2016, new documents reveal. Federal authorities ran a surveillance operation on By Any Means Necessary (Bamn), spying on the leftist group’s movements in an inquiry that came after one of Bamn’s members was stabbed at the white supremacist rally, according to documents obtained by the Guardian. The FBI’s Bamn files reveal: The FBI’s 46-page report on Bamn, obtained by the government transparency non-profit Property of the People through a records request, presented an “astonishing” description of the KKK, said Mike German, a former FBI agent and far-right expert who reviewed the documents for the Guardian.

Forget Trump's border distraction – the real threat is inside the house We already know that the border is a distraction and the dangers there are largely fictions. We know that undocumented immigrants commit crime at lower rates than US-born people; that most undocumented people in the US got here by overstaying their visas, not coming across the southern border illicitly and that undocumented people are a crucial part of the labor force. But we also know that if you can get people excited about imaginary threats, you can distract them from the real ones, and that often the greatest dangers are the people fomenting the excitement. We already know that the serious threats are coming from inside the house.

Revealed: 'dozens' of girls subjected to breast-ironing in UK An African practice of “ironing” a girl’s chest with a hot stone to delay breast formation is spreading in the UK, with anecdotal evidence of dozens of recent cases, a Guardian investigation has established. Community workers in London, Yorkshire, Essex and the West Midlands have told the Guardian of cases in which pre-teen girls from the diaspora of several African countries are subjected to the painful, abusive and ultimately futile practice. It’s important to say this is not a step towards a paywall We need more readers to register with us to help sustain our independent, quality journalism. Without you taking this simple step, we miss out on revenues from personalised advertising - a critical source of funding for our future. Through doing so, you'll help ensure that our reporting remains freely available to everyone, and if we recognise you when you come back, we can improve your news experience too.

The Best Emergency Preparedness Supplies for 2019: Reviews by Wirecutter The key tools to have on hand for an emergency—everything from an atlas to good duct tape—are also key tools to have on hand for life in general. A common theme that we noticed in this category is that while a great tool can be a genuine joy to use and serve you well for years (if not decades), cheap imitators will waste both your money and your time. Go for the good stuff. —KT How to Fix the Supreme Court, Part One: C is for Clarence - PREVAIL by Greg Olear “If everyone made war only according to his own convictions, there would be no war,” Prince Andrei Bolkonsky thought… A good player who loses at chess is genuinely convinced that he has lost because of a mistake, and he looks for this mistake in the beginning of the game, but forgets that there were also mistakes at every step in the course of the game, that none of his moves was perfect. The mistake he pays attention to is conspicuous only because his opponent took advantage of it.

How the religious right gained unprecedented access to Trump The US health secretary sat for an interview with a man experts say is the leader of a hate group known for “defaming gays and lesbians”, just two days after Karen Pence, the US second lady, was criticized for teaching at a Christian school that bans homosexuality. Alex Azar, secretary of health and human services, was interviewed by the Family Research Council President, Tony Perkins, at an anti-abortion event called ProLifeCon in mid-January. “We are the department of life,” Azar told Perkins, “from conception until natural death, through all of our programs.” He then rattled off victories – new policies that make it difficult to obtain an abortion, including allowing healthcare workers to refuse to treat patients based on moral objections. “The right of conscience is as foundational as the right to life.”