President Trump's Post-Election Behavior Indefensible. Welcome to “The Tuesday,” a weekly newsletter that usually comes out sometime during the 24-hour period between Moon Day and Woden’s Day. 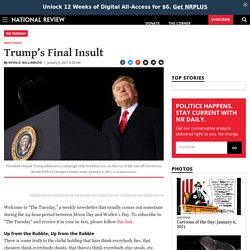 To subscribe to “The Tuesday” and receive it in your in-box, please follow this link. Up from the Rubble, Up from the Rabble There is some truth to the cliché holding that liars think everybody lies, that cheaters think everybody cheats, that thieves think everybody else steals, etc. Understood as an emotional self-defense strategy, that has a great deal of explanatory power: We may talk about having the “fear of God” in us, but what people actually fear is social rejection, which is why people with a paralyzing fear of public speaking are considered entirely normal while people with an insistent terror of eternal damnation are judged fanatics and crackpots.

We tell our children that there is nowhere to hide in “But everybody else is doing it!” Biden reformed Ukraine. Trump Made Ukraine Corrupt Again. Photo: Chip Somodevilla/Getty Images Louisiana senator John Kennedy offered one of the Republican Party’s emerging defenses of President Trump’s extortion scheme. 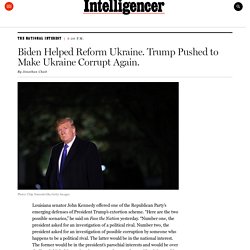 “Here are the two possible scenarios,” he said on Face the Nation yesterday. “Number one, the president asked for an investigation of a political rival. Number two, the president asked for an investigation of possible corruption by someone who happens to be a political rival. The latter would be in the national interest. Adam Schiff Hires a Former Prosecutor to Lead the Trump Investigation. Representative Adam Schiff, the chairman of the House Permanent Select Committee on Intelligence, has hired a veteran prosecutor with experience fighting Russian organized crime to lead his investigation of the Trump Administration. 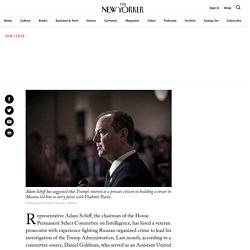 Last month, according to a committee source, Daniel Goldman, who served as an Assistant United States Attorney in the Southern District of New York from 2007 to 2017, joined the committee’s staff as a senior adviser and the director of investigations. The Only Impeachment Guide You’ll Ever Need. It’s been barely a week since Democrats took control of the House of Representatives, and already the I-word is flying around Washington. 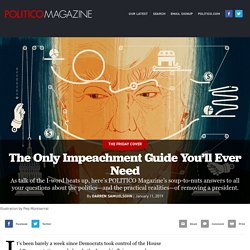 “We’re going to impeach the motherfucker,” Rashida Tlaib declared jubilantly mere hours after being sworn in. Longtime members Brad Sherman and Al Green filed articles of impeachment against President Donald Trump on the first day of the new session. And the president, for his part, is clearly spoiling for the fight, declaring in a Rose Garden news conference, “Well, you can’t impeach somebody that’s doing a great job.” Now what? Story Continued Below. Donald Trump’s Favorite Drug Trafficker and Other Unsung Scandals of the Presidency From Hell. No reporter has scrutinized Donald Trump longer and more closely than David Cay Johnston. 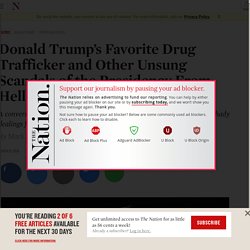 Johnston met the future president in 1988 while investigating Trump’s casino operations in Atlantic City for The Philadelphia Inquirer, uncovering evidence of connections between Trump and the Mafia. Johnston’s subsequent exposés of the US tax system’s bias toward the rich and corporations, including his book, Perfectly Legal, have won many awards, including a Pulitzer Prize. He spoke with The Nation’s Mark Hertsgaard about his new book, It’s Even Worse Than You Think: What the Trump Administration Is Doing to America. This interview has been edited for length and clarity. —Mark Hertsgaard. The Steele Dossier: A Retrospective. - The Washington Post. Critical Path. Why is John Kerry going down to Antarctica just a week after the election to discuss climate change and then you have energy beams coming out of Antarctica splitting hurricanes? 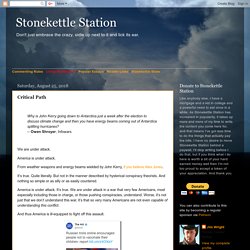 -- Owen Shroyer, Infowars We are under attack. America is under attack. From weather weapons and energy beams wielded by John Kerry, if you believe Alex Jones. It’s true. America is under attack. And thus America is ill-equipped to fight off this assault. A study published today in Research and Practice, describes how Russian operators have weaponized health communication. Specifically the authors, David A. European Commission president used flash cards to explain trade to Trump. - The Washington Post.

- The Washington Post. A new study suggests fake news might have won Donald Trump the 2016 election. A Ranting Old Guy With Nukes. Christopher Steele, the Man Behind the Trump Dossier. In January, after a long day at his London office, Christopher Steele, the former spy turned private investigator, was stepping off a commuter train in Farnham, where he lives, when one of his two phones rang. 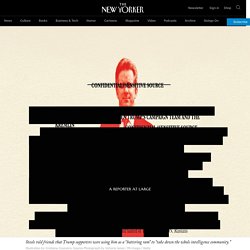 He’d been looking forward to dinner at home with his wife, and perhaps a glass of wine. It had been their dream to live in Farnham, a town in Surrey with a beautiful Georgian high street, where they could afford a house big enough to accommodate their four children, on nearly an acre of land. Steele, who is fifty-three, looked much like the other businessmen heading home, except for the fact that he kept his phones in a Faraday bag—a pouch, of military-tested double-grade fabric, designed to block signal detection. A friend in Washington, D.C., was calling with bad news: two Republican senators, Lindsey Graham and Charles Grassley, had just referred Steele’s name to the Department of Justice, for a possible criminal investigation.

Even before Steele became involved in the U.S. Trump has announced massive aluminum and steel tariffs. Here are 5 things you need to know. President Trump meets with steel and aluminum executives on March 1, 2018. 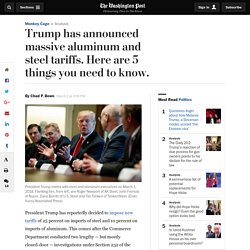 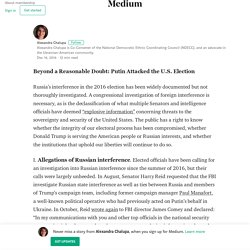 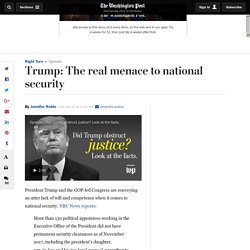 'I Hope This Is an Instance of Fake News': FBI Messages Show the Bureau's Real Reaction to Trump Firing James Comey. Rod Rosenstein Will Decide the Outcome of Mueller's Investigation. The latest revelations about President Trump have, once again, excited the interest of the public, leading to speculation that Special Counsel Robert Mueller may have amassed sufficient evidence to charge the president with obstruction of justice. Trump’s attempt to fire Mueller (which happened last June, but is only now being publicly reported) is, under this line of thinking, the final straw. Color me deeply skeptical. Mueller will not indict Trump for obstruction of justice or for any other crime.

Period. Full stop. The Crime Is Worse Than The Coverup. Trump Tower meeting with Russians 'treasonous', Steve Bannon says in explosive book. Thoughts on Rod Rosenstein’s Testimony. I have not watched all of Deputy Attorney General Rod Rosenstein’s testimony before the House Judiciary Committee yesterday. But I watched three hours of it, and that was quite enough to convey the disturbing and dangerous nature of the current moment. It was enough to highlight the apparent breadth of the congressional Republican effort to delegitimize the Robert Mueller investigation. The attacks on Mueller and his staff and allegations of supposed conflicts of interest were not the province of a fringe but a matter of an apparent consensus among House Republicans, at least on the famously partisan judiciary committee.

It was enough to loose upon the world an almost hysterical attack on an FBI agent and an FBI attorney in the presence of little evidence that either has done anything wrong—as opposed to merely ill-advised and unfortunate—and in the midst of an ongoing inspector general investigation that has not yet reached any conclusions. Trump won't let his top advisers talks to him about Russia's election interference. This big development in the Mueller probe could put Trump in danger. (Susan Walsh/Associated Press) On Jan. 24, President Trump’s former national security adviser, Michael Flynn, lied to the FBI about his contacts with the Russian ambassador during the transition. On Jan. 26, the White House was informed that Flynn had misled top Trump officials about those contacts. On Feb. 13, Trump fired Flynn. One big question now is: Did any of Trump’s top officials — or Trump himself — direct Flynn to lie to the FBI about these contacts?