The Hall of Records, A Not So Secret Room. BBC Four - American History’s Biggest Fibs with Lucy Worsley, Series 1, The American Revolution. The Vietnam War: A film by Ken Burns & Lynn Novick. Hitler and Trump: Common Slogans? In March 2016, various online images attempted to draw a connection between Republican presidential candidate Donald Trump and Nazi leader Adolf Hitler by claiming that both politicians campaigned using similar slogans: Hitler didn’t technically ever employ “Make Germany great again” (“machen Deutschland wieder groß” in German) as a campaign slogan himself, as the only office he achieved before seizing dictatorial control of the German government was an appointed one, and the Nazi Party didn’t need to do any “campaigning” after that, as one of Hitler’s first actions was to outlaw all other political parties. 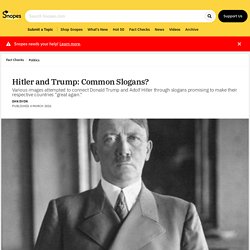 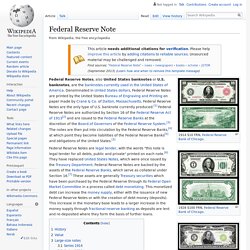 Complete National Recording Registry Listing   John Burroughs. John Burroughs (April 3, 1837 – March 29, 1921) was an American naturalist and nature essayist, active in the U.S. conservation movement.[1] The first of his essay collections was Wake-Robin in 1871. 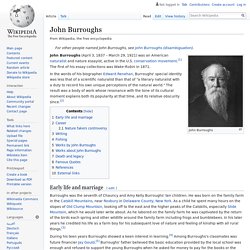 In the words of his biographer Edward Renehan, Burroughs' special identity was less that of a scientific naturalist than that of "a literary naturalist with a duty to record his own unique perceptions of the natural world. " The result was a body of work whose resonance with the tone of its cultural moment explains both its popularity at that time, and its relative obscurity since.[2] Early life and marriage[edit] During his teen years Burroughs showed a keen interest in learning.[4] Among Burroughs's classmates was future financier Jay Gould.[5] Burroughs' father believed the basic education provided by the local school was enough and refused to support the young Burroughs when he asked for money to pay for the books or the higher education he wanted. Career[edit] Writing[edit] Radio Diaries by Radiotopia. Space Shuttle Challenger Disaster Oral History. BBC Four - American History’s Biggest Fibs with Lucy Worsley. What we learned from walking in the footsteps of Harriet Tubman.

Morgan Dixon and Vanessa Garrison hiked the path that Harriet Tubman took to freedom nearly 170 years ago. Their journey was both painful and beautiful, demanding and transcendent. Here are some lessons from their long walk. “When Black women walk, things change.” T. To celebrate that day in 2018, Dixon and her GirlTrek cofounder, Vanessa Garrison, had an idea: What if they retraced Harriet Tubman’s path? During the journey, Dixon and Garrison learned much that they’ll use this year, as they rally Black women in the US to join their movement for better health.

BBC Radio 4 - The Green Book. The Green Book: The Black Travelers’ Guide to Jim Crow America. For nearly 30 years, a guide called the “Negro Motorist Green Book” provided African Americans with advice on safe places to eat and sleep when they traveled through the Jim Crow-era United States. 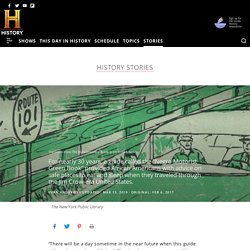 “There will be a day sometime in the near future when this guide will not have to be published. That is when we as a race will have equal opportunities and privileges in the United States. It will be a great day for us to suspend this publication for then we can go wherever we please, and without embarrassment.” Area 51 Location - The Real Story Behind the Myth of Area 51. "They flew them [over Area 51]..and pitted our own fighters against them to develop tactics," says Merlin, "They learned that you can't out-turn it, but you can outrun it. 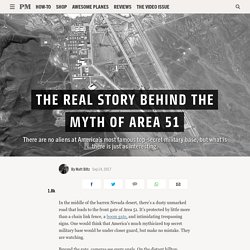 And it's still going on today.... Now, instead of seeing MiG-17s and 21s, there's MiG-29s and SU-27s. " The flights are ongoing. In September 2017, an Air Force Lt. “This is sacred ground”: a visit to the lynching memorial in Alabama. A sculpture by Hank Willis Thomas, located on the memorial grounds. 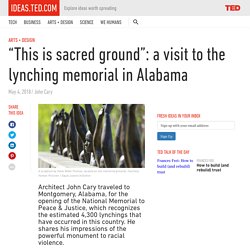 Courtesy Human Pictures / Equal Justice Initiative On April 23, 2018, the state of Alabama celebrated “Confederate Memorial Day.” Yup, you’ve got that right: while controversy over the removal of Confederate flags and statues continues to make national news, Alabama is one of several states in America that continues to dedicate an official holiday to the Confederacy. The history of the Hollywood sign. Every year at the Oscars, the cameras pan to the famed Hollywood sign and its bold white letters. 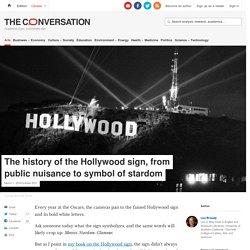 Ask someone today what the sign symbolizes, and the same words will likely crop up: Movies. Stardom. When Infants in Incubators Were a Sideshow Attraction. Before Lucille Horn came to be under the care of Martin Couney, in 1920, the doctors who’d brought her into the world had provided a bleak prognosis. 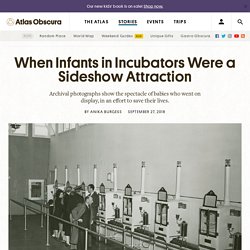 “They didn’t have any help for me at all. It was just: you die because you didn’t belong in the world,” she later recalled. Horn had been born prematurely, weighing around two pounds; her twin had died at birth. Hospitals at that time did not treat such small babies, but her father knew someone who did. A 15-Year-Old Girl Heard Amelia Earhart's Last Transmission. As a young reporter, I went undercover to expose the Ku Klux Klan. Spike Lee’s powerful new film, “BlacKkKlansman,” tells the true story of Ron Stallworth, an African-American police officer who infiltrates a local branch the Ku Klux Klan in 1979. 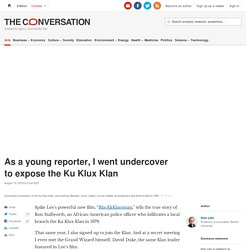 That same year, I also signed up to join the Klan. Juneteenth and the Detention of Children in Texas. Tulsa race riot. The Tulsa Race Riot was a large-scale, racially motivated conflict on May 31 and June 1, 1921, in which whites attacked the black community of Tulsa, Oklahoma. It resulted in the Greenwood District, also known as 'the Black Wall Street'[1] and the wealthiest black community in the United States, being burned to the ground. During the 16 hours of the assault, more than 800 blacks were admitted to local white hospitals with injuries (the black hospital was burned down), and police arrested and detained more than 6,000 black Greenwood residents at three local facilities, in part for their protection.[2] An estimated 10,000 blacks were left homeless, and 35 city blocks composed of 1,256 residences were destroyed by fire.

The official count of the dead by the Oklahoma Department of Vital Statistics was 39, but other estimates of black fatalities have been up to about 300.[2] The events of the riot were long omitted from local and state histories. Prison records from 1800s Georgia show mass incarceration’s racially charged beginnings. Henry Minter was working as a farm laborer in Georgia in the 1870s when he met Mary Dotson, a young black servant girl.

The couple never married – which would have been illegal at the time – but they stayed together until Henry’s death. Mary, who was left with their four children, then became a washerwoman in Atlanta. Their daughter, Florence, tried to raise funds by making moonshine. Caught in 1920, she served three years for illegally making liquor. Black Women Writers of the 19th Century. African-American Women Authors in Antebellum America Image: Middle-class black women who loved to read did not have many role models. Credit: Jeffrey Green Prior to the Civil War, the majority of African-Americans living in the United States were held in bondage. Although law forbade them, many found a way to learn to read and write. Archives.chicagotribune.

As of July 1, 2013 ThinkQuest has been discontinued. We would like to thank everyone for being a part of the ThinkQuest global community: Students - For your limitless creativity and innovation, which inspires us all. Teachers - For your passion in guiding students on their quest. Partners - For your unwavering support and evangelism. Chile Coup d'Etat 1973 Cold War Museum.

Additional Links. American Social Hygiene Posters. Photo Gallery. Home: U.S. Department of State - Freedom of Information Act. The Emma Goldman Papers (DL SunSITE) Civil Rights Movement - Black History. The civil rights movement was a struggle for social justice that took place mainly during the 1950s and 1960s for blacks to gain equal rights under the law in the United States. The Civil War had officially abolished slavery, but it didn’t end discrimination against blacks—they continued to endure the devastating effects of racism, especially in the South. By the mid-20th century, African Americans had had more than enough of prejudice and violence against them. They, along with many whites, mobilized and began an unprecedented fight for equality that spanned two decades. Jim Crow Laws. Navy Dolphins - Historical Chronology. McCarthyism. Senator Joe McCarthy and chief counsel Roy Cohn interrogating suspected communists. America’s Hidden History: The Eugenics Movement.