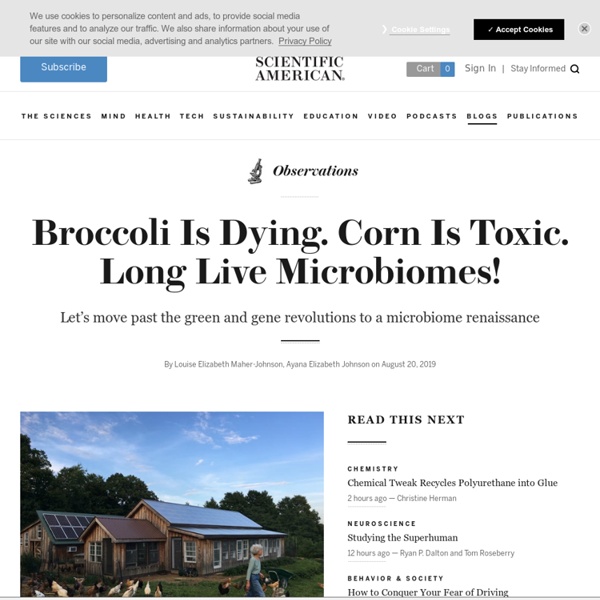 Editor’s Note (9/3/2019): This post has been substantially rewritten to change or eliminate claims and sourcing that did not meet Scientific American’s editorial standards. The revised post can be found here. As food writer Mark Bittman recently remarked, since food is defined as “a substance that provides nutrition and promotes growth” and poison is “a substance that promotes illness,” then “much of what is produced by industrial agriculture is, quite literally, not food but poison.” Of course, it doesn’t have to be this way. Eliminating pesticides and transitioning to organic regenerative farming can get us back on track to nutritious food, restore microbiomes and protect our health. Let’s break all this down, and then talk solutions. “You would have to eat twice as much broccoli today to get the same nutrients as a generation ago.” Why are nutrients in our food declining? Not only are plants getting less nutritious, they’re also getting more toxic. Doomsday scenario?

Related:  Eat to Live • know about world • How it works • The Only Earth We Have • Do It Yourself Home & Garden

Our list of 5 underrated foods that deserve a spot in your grocery cart - Nutrition Action When was the last time you walked into the supermarket and made a beeline for the bulgur or cabbage? These underrated stars aren’t just delicious and healthy. They’re also relatively unprocessed, inexpensive, and versatile. 1. Twitter storm: noise pollution creates havoc for birds, study shows Birds are even more disrupted by their noisy neighbours than had been thought previously, researchers have found. And human activities could be preventing birds from reproducing and even developing normal social behaviour and keeping the peace. A study by Queen’s University Belfast found that when European robins were subjected to human produced noises their behaviour changed. Background noise appeared to mask the communication of crucial information between birds. While aggressive communication is common and birds respond to it, interference through noise can lead to the birds mistaking the signals.

American Capitalism Is Brutal. You Can Trace That to the Plantation. A couple of years before he was convicted of securities fraud, Martin Shkreli was the chief executive of a pharmaceutical company that acquired the rights to Daraprim, a lifesaving antiparasitic drug. Previously the drug cost $13.50 a pill, but in Shkreli’s hands, the price quickly increased by a factor of 56, to $750 a pill. At a health care conference, Shkreli told the audience that he should have raised the price even higher. “No one wants to say it, no one’s proud of it,” he explained. Climate Undermined by Lobbying For all the evidence that the benefits of reducing greenhouse gases outweigh the costs of regulation, disturbingly few domestic climate change policies have been enacted around the world so far. So say UC Santa Barbara professor and economist Kyle Meng, and co-author Ashwin Rode, a former UCSB Ph.D. student now at the University of Chicago, in a paper published in the journal Nature Climate Change. “There is a striking disconnect between what is needed to avoid dangerous climate change and what has actually been done to date,” said Meng, a professor in the Bren School of Environmental Science & Management and in the Department of Economics. One common explanation for that disconnect, he added, is that jurisdictions are reluctant to adopt climate policy when they can simply benefit from the reductions implemented by other jurisdictions. However, say Meng and Rode, the political process that leads to climate change regulation can be a barrier to its own legislation.

Portland Nursery Daphne odora: Winter Daphne Pink buds in January open to light pink flowers in February and March. The scent is so thick that on warmer days it can envelop a neighborhood. Leaves are evergreen & leathery. Poor Diet Linked to Thousands of Cancer Diagnoses, Study Finds Your diet may have more impact on your cancer risk than you might think, a new study has found. An estimated 80,110 new cancer cases among adults 20 and older in the United States in 2015 were attributable simply to eating a poor diet, according to the study, published in the JNCI Cancer Spectrum on Wednesday. “This is equivalent to about 5.2% of all invasive cancer cases newly diagnosed among US adults in 2015,” said Dr. Fang Fang Zhang, a nutrition and cancer epidemiologist at Tufts University in Boston, who was first author of the study.

Zero elephants poached in a year in top Africa wildlife park One of Africa's largest wildlife preserves is marking a year without a single elephant found killed by poachers, which experts call an extraordinary development in an area larger than Switzerland where thousands of the animals have been slaughtered in recent years. The apparent turnaround in Niassa reserve in a remote region of northern Mozambique comes after the introduction of a rapid intervention police force and more assertive patrolling and response by air, according to the New York-based Wildlife Conservation Society, which manages the reserve with Mozambique's government and several other partners. Monitoring of the vast reserve with aerial surveys and foot patrols remains incomplete and relies on sampling, however.

The Great Battle of Fire and Light — Wait But Why Note: This is the second post in the series. The first one is here. There is a great deal of human nature in people. – Mark Twain The animal world is a stressful place to be. The problem is that the animal world isn’t really an animal world—it’s a world of trillions of strands of genetic information, each one hell-bent on immortality. The Social Life of Forests The Social Life of Forests By Ferris Jabr Photographs by Brendan George Ko As a child, Suzanne Simard often roamed Canada’s old-growth forests with her siblings, building forts from fallen branches, foraging mushrooms and huckleberries and occasionally eating handfuls of dirt (she liked the taste). Her grandfather and uncles, meanwhile, worked nearby as horse loggers, using low-impact methods to selectively harvest cedar, Douglas fir and white pine. They took so few trees that Simard never noticed much of a difference. The forest seemed ageless and infinite, pillared with conifers, jeweled with raindrops and brimming with ferns and fairy bells.

10 Best Gas Fireplace Stoves By Consumer Report for 2019 - The Consumer Guide If you have insufficient heating in your home, or are just looking for another heat source to make your house more cozy, a gas fireplace stove may be the answer. These fireplaces are relatively easy to install and many can be used throughout the home. If you choose a fireplace that doesn’t require venting, you can have it installed on an interior or exterior wall. The hardest part of the process is having the gas lines put in. Anti-Inflammatory Coconut and Sweet Potato Muffins with Ginger, Turmeric, Cinnamon, and Maple Syrup The idea that delicious baked goods can also be a healthy snack is extremely satisfying. Try to avoid the traditional inflammatory ingredients like processed grains, refined sugars, vegetable oils, and trans fat. If you're able to replace them with anti-inflammatory ingredients that are rich in nutrients, you will end up with a healthy and tasty snack. The recipe below contains a large amount of sweet potatoes or yams, which are very nutritious and a great source of antioxidants, vitamins, and minerals.