How American Cities Got Their Libraries. Editor’s note: This month, CityLab’s visual storyteller Ariel Aberg-Riger shares the story of how America’s public libraries came to be, and their uneven history of serving all who need them. 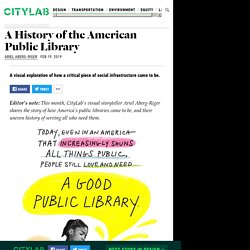 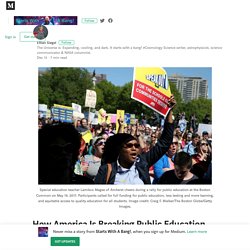 Students, ideally, would go to a classroom, receive top-notch instruction from a passionate, well-informed teacher, would work hard in their class, and would come away with a new set of skills, talents, interests, and capabilities. Over the past few decades in the United States, a number of education reforms have been enacted, designed to measure and improve student learning outcomes, holding teachers accountable for their students’ performances. Despite these well-intentioned programs, including No Child Left Behind, Race To The Top, and the Every Student Succeeds Act, public education is more broken than ever.

The reason, as much as we hate to admit it, is that we’ve disobeyed the cardinal rule of success in any industry: treating your workers like professionals. Everyone who’s been through school has had experiences with a wide variety of teachers, ranging from the colossally bad to the spectacularly good. Probation and Parole Systems Missed Opportunities. Overview Incarceration has long dominated the national conversation on criminal justice, because the U.S. prison population skyrocketed between the 1980s and late 2000s. 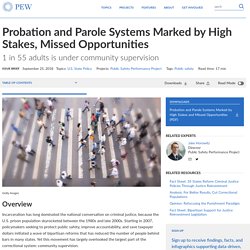 Starting in 2007, policymakers seeking to protect public safety, improve accountability, and save taxpayer dollars initiated a wave of bipartisan reforms that has reduced the number of people behind bars in many states. Yet this movement has largely overlooked the largest part of the correctional system: community supervision. Nationwide, 4.5 million people are on probation or parole—twice the incarcerated population, including those in state and federal prisons and local jails.

The growth and size of the supervised population has undermined the ability of local and state community corrections agencies to carry out their basic responsibilities to provide the best public safety return on investment as well as a measure of accountability. Policy changes can reduce correctional control and improve public safety. Glossary. Prison records show mass incarceration’s racially charged beginnings 2x.

Henry Minter was working as a farm laborer in Georgia in the 1870s when he met Mary Dotson, a young black servant girl. 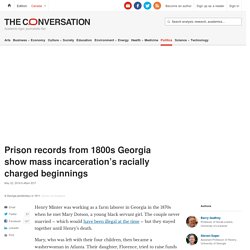 The couple never married – which would have been illegal at the time – but they stayed together until Henry’s death. Mary, who was left with their four children, then became a washerwoman in Atlanta. Their daughter, Florence, tried to raise funds by making moonshine. Caught in 1920, she served three years for illegally making liquor. When Florence’s father was born in the 1850s, the state prison population was largely white. Newly digitized records from the 19th and 20th centuries reveal the names and the stories of thousands of prisoners like Florence – as well as the racially charged beginnings of mass incarceration in the U.S. 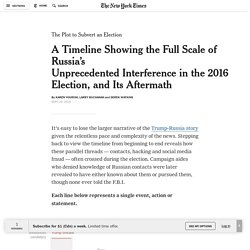 He says he was told that a priority of the campaign was a better relationship with Russia. March14 He meets with a London-based professor who claims to have ties to the Russian government. March15 Russian hackers begin targeting computer networks of the Democratic National Committee, Democratic Congressional Campaign Committee and Clinton campaign. March19 They send a phishing email to John D. March21 Trump names members of his foreign policy team, including Papadopoulos and Carter Page. March24 The professor introduces Papadopoulos to a Russian woman described as Putin’s niece (she was not) and they all discuss setting up a meeting between Trump and Putin.

We are tracking environmental regulatory rollbacks of the Trump Administration. 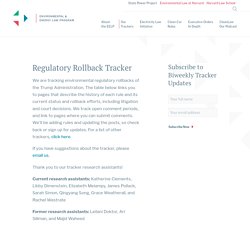 The table below links you to pages that describe the history of each rule and its current status and rollback efforts, including litigation and court decisions. We track open comment periods, and link to pages where you can submit comments. We’ll be adding rules and updating the posts, so check back or sign up for updates. For a list of other trackers, click here. If you have suggestions about the tracker, please email us. Climate and health showdown in the courts. Edgy. Engineerable Feats. Skillsets. Percolate.