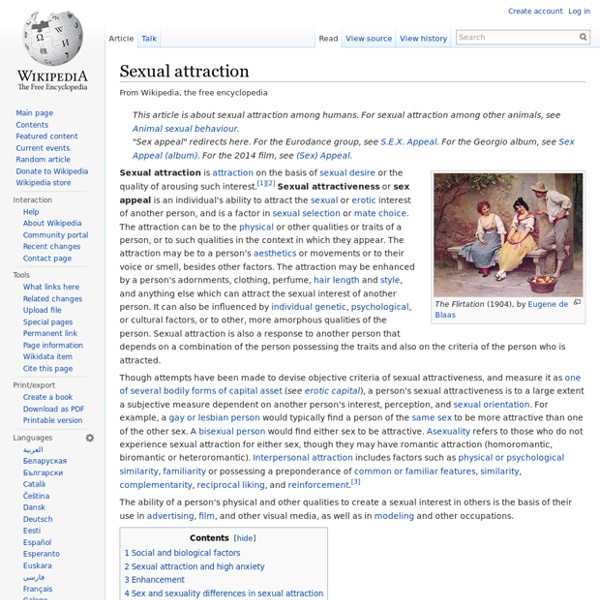 This article is about sexual attraction among humans. For sexual attraction among other animals, see Animal sexual behaviour. Sexual attraction is attraction on the basis of sexual desire or the quality of arousing such interest.[1][2] Sexual attractiveness or sex appeal is an individual's ability to attract the sexual or erotic interest of another person, and is a factor in sexual selection or mate choice. The attraction can be to the physical or other qualities or traits of a person, or to such qualities in the context in which they appear. The attraction may be to a person's aesthetics or movements or to their voice or smell, besides other factors. The attraction may be enhanced by a person's adornments, clothing, perfume, hair length and style, and anything else which can attract the sexual interest of another person. Social and biological factors Human sexuality has many aspects. A person's physical appearance has a critical impact on their sexual attractiveness. Enhancement See also

Relationship between religion and science The relationship between religion and science has been a subject of study since Classical antiquity, addressed by philosophers, theologians, scientists, and others. Perspectives from different geographical regions, cultures and historical epochs are diverse, with some characterizing the relationship as one of conflict, others describing it as one of harmony, and others proposing little interaction. Science and religion generally pursue knowledge of the universe using different methodologies. Science acknowledges reason, empiricism, and evidence, while religions include revelation, faith and sacredness. Despite these differences, most scientific and technical innovations prior to the Scientific revolution were achieved by societies organized by religious traditions. Much of the scientific method was pioneered first by Islamic scholars, and later by Christians. Many theologians, philosophers and scientists in history have found no conflict between their faith and science. Dialogue[edit]

AboveTopSecret.com - Conspiracy Theories, UFOs, Paranormal, Political Madness, and other "Alternative Topics" How to Have Sex Appeal Edit Article As a GuyAs a Girl Edited by suzi, Flickety, Cipher_nemo, Axiom and 190 others Sex appeal is, by nature, almost undefinable — it's that nebulous quality that draws you to someone who isn't necessarily attractive, smart or even nice. However, just because it's elusive doesn't mean it's not achievable. Ad Steps Part 1 of 2: As a Guy 1Take charge. 4Accept rejection gracefully. Part 2 of 2: As a Girl 1Maintain a little mystery. 4Stay aloof from pettiness. Tips Put your hand on her legs. Article Info Featured Article Categories: Featured Articles Recent edits by: Traged, Happyeditor, AwesomeSauceDude456 In other languages:

British Slang If you’re planning on visiting London in the future, you might just want to familiarise yourself with some British Slang expressions that are very commonly used by the British. They will be very useful particularly if you’re likely to be socialising with Londoners. 1. “Mind The Gap” This famous expression is always used on trains and the London Underground (Tube). 2. “Mate” is British Slang used to refer to men. 3. If something is “naff”, it is very uncool. 4. This British Slang word is not to be confused with the film of the same title where the main characters removed all their clothes for a striptease act. 5. The literal meaning is larva, but it is also another word for food. 6. “I love Pringle Crisps. 7. When the English don’t like something, but don’t want to be rude they will say: ” I’m afraid that going to nightclubs is not my cup of tea”. 8. This is another British slang word for the UK currency, the pound. 9. 10. This basically means ‘thank you’. Ciao for now. Shanthi

21 Hidden Secrets of the Illuminati « 100 Musical Footsteps to celebrate Angels and Demons (dan brown’s latest film), I play a little devil’s advocate here. After all, the Illuminati CONTROL EVERYTHING, don’t they? 1. they control the media. yep, cnn, bbc, fox news, printed pages. 2. they control banking. yep, and deliberately crashed their own financial system. 3. they control medicine. with pharmaceuticals they pollute and corrupt your body. 4. they control politicians. 5. they control lawmakers / judges – everyone has had their youthful indiscretions. 6. they control technology. ever since Roswell, we have been on a technological ascent. 7. they control weather – using HAARP technology they can cause / manipulate the seasons & hurricanes. 8. they control frequencies. it has been said that mobile phone frequencies attune with the human mind, and distort / corrupt it. 9. the control food – using GM technologies, our food is being degraded of precious life. 11. they control religion. 20. they control … YOU! the truth will set you free your friend

Improve Vision Naturally with Eye Exercises Wibe7.tv Harvard Natural Sciences Lecture Demonstrations Privacy statement for use where IP addresses are logged and analyzed for statistical purposes. The following discloses our information gathering and dissemination practices for this web site (www.sciencedemonstrations.fas.harvard.edu). Information gathering Our web server software generates logfiles of the IP addresses of computers that access this web site and of what files they access. Use of information We use your IP address and files you access to help diagnose problems with our server and to administer our Web site by identifying (1) which parts of our site are most heavily used, and (2) which portion of our audience comes from within the Harvard network. We do not link IP addresses to anything personally identifiable. Security This site has security measures in place to protect the loss, misuse and alteration of the information under our control. Contacting the Homepage This web site may contain links to other web sites. Changes to this policy Effective Date