The bad behavior of the richest: what I learned from wealth managers 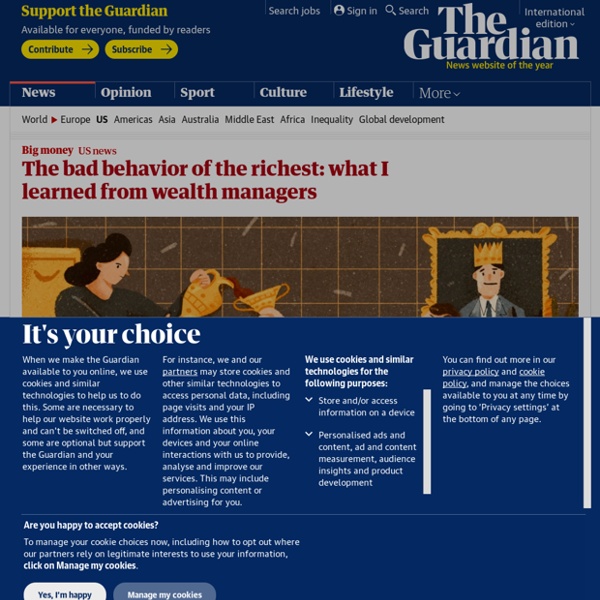 If nearly a decade interviewing the wealth managers for the 1% taught me anything, it is that the ultra-rich and the ultra-poor have a lot more in common than stereotypes might lead you to believe. In conversation, wealth managers kept coming back to the flamboyant vices of their clients. It was quite unexpected, in the course of discussing tax avoidance, to hear professional service providers say things like: “I’ve told my colleagues: ‘If I ever become like some of our clients, shoot me.’ Because they are really immoral people – too much time on their hands, and all the money means they have no limits. I was actually told by one client not to bring my wife on a trip to Monaco unless I wanted to see her get hit on by 10 guys. The clients of this Geneva-based wealth manager also “believe that they are descended from the pharaohs, and that they were destined to inherit the earth”. As Lane and Harburg put it in the libretto of the musical Finian’s Rainbow: “I am not tax resident anywhere.

The KKK was a pyramid scheme exploiting racism for money — Quartz The 1920s KKK made a lot of money selling robes, memorabilia, candy, and life insurance policies to its own members Today, the Ku Klux Klan is one of the most extreme and reviled symbols of American racism. But there was once a time when the fringe hate group verged on “mainstream.” Pumpkin pies, pilgrims and pre-existing conditions: PolitiFact’s 2018 Thanksgiving dinner guide The conversation may start out innocently enough, but there will be hints of what’s to come after the turkey’s been carved. "I love all of you, regardless of your pre-existing conditions." "My, my, you’re getting tall! Almost as tall as the border wall." Then, after a few rounds of stuffing and possibly a few rounds of something stronger, someone will say something you can’t ignore.

Left–right political spectrum The left–right political spectrum is a system of classifying political positions, ideologies and parties, from equality on the left to social hierarchy on the right.[1] Left-wing politics and right-wing politics are often presented as opposed, although a particular individual or group may take a left-wing stance on one matter and a right-wing stance on another; and some stances may overlap and be considered either left- or right-wing depending on the ideology.[2] In France, where the terms originated, the Left has been called "the party of movement" and the Right "the party of order".[3][4][5][6] The intermediate stance is called centrism and a person with such a position is a moderate or centrist. History of the terms[edit] By 1914, the Left half of the legislature in France was composed of Unified Socialists, Republican Socialists and Socialist Radicals, while the parties that were called "Left" now sat on the right side.

The John Birch Society influencing American politics, 60 years later click2x The retired candy entrepreneur Robert Welch founded the John Birch Society 60 years ago to push back against what he perceived as a growing American welfare state modeled on communism and the federal government’s push to desegregate America. Although Welch’s group has never amassed more than 100,000 dues-paying members, it had garnered an estimated 4 to 6 million sympathizers within four years of its 1958 formation. As a scholar of political history and social movements, I find many parallels between today’s far right and its predecessors. Just as the John Birch Society emerged in the midst of the civil rights movement, today’s far-right movements formed as a reaction to the election of Barack Obama – a milestone for racial equality.

The origins of Thanksgiving Before gobbling turkey, stuffing and pumpkin pie -- or engaging in a well-informed political spat with your family -- some of you might wonder where the Thanksgiving tradition originated. We wondered, too. So we talked with historians to get the facts straight. As it turns out, historians trace the food coma-inducing tradition to multiple origins -- none of which closely resemble what Americans celebrate today. Vikings: Warriors of No Nation In January 2018, President Trump expressed a preference for immigrants from affluent nations such as Norway, as opposed to those from what he termed ‘shithole countries’. The indignant response was on a global scale. Photos of beautiful African sunsets and wildlife were posted. One Norwegian woman tweeted: ‘We are not coming. Cheers from Norway.’ Trump was not the first to misuse Scandinavian countries as a poster child for racism.

The Root of All Cruelty? The philosopher David Livingstone Smith, commenting on this episode on social media, wondered whether its writer had read his book “Less Than Human: Why We Demean, Enslave, and Exterminate Others” (St. Martin’s). It’s a thoughtful and exhaustive exploration of human cruelty, and the episode perfectly captures its core idea: that acts such as genocide happen when one fails to appreciate the humanity of others. One focus of Smith’s book is the attitudes of slave owners; the seventeenth-century missionary Morgan Godwyn observed that they believed the Negroes, “though in their Figure they carry some resemblances of Manhood, yet are indeed no Men” but, rather, “Creatures destitute of Souls, to be ranked among Brute Beasts, and treated accordingly.”

Antisemitism Origin and Meaning of the Term The word antisemitism means prejudice against or hatred of Jews. The Holocaust, the state-sponsored persecution and murder of European Jews by Nazi Germany and its collaborators between 1933 and 1945, is history’s most extreme example of antisemitism. In 1879, German journalist Wilhelm Marr originated the term antisemitism, denoting the hatred of Jews, and also hatred of various liberal, cosmopolitan, and international political trends of the eighteenth and nineteenth centuries often associated with Jews. The Religion of Workism Is Making Americans Miserable There is nothing wrong with work, when work must be done. And there is no question that an elite obsession with meaningful work will produce a handful of winners who hit the workist lottery: busy, rich, and deeply fulfilled. But a culture that funnels its dreams of self-actualization into salaried jobs is setting itself up for collective anxiety, mass disappointment, and inevitable burnout. In the past century, the American conception of work has shifted from jobs to careers to callings—from necessity to status to meaning.

Hysteresis: The Phenomenon Behind the Anti-vax Movement Despite overwhelming scientific evidence that vaccines are a safe and effective tool for the prevention of childhood diseases, a significant minority of the U.S. population remains skeptical of the practice, as evidenced by the persistence of the anti-vax movement. This has sometimes made it a difficult task to achieve the desired level of coverage required for the protective effects of “herd immunity” to kick in. Now, researchers from Dartmouth College have investigated this phenomenon, uncovering a key factor in why it may be so hard to increase the numbers of people being vaccinated. In a study published in the journal Proceedings of the Royal Society B, Feng Fu, an assistant professor of mathematics, and colleagues showed that a phenomenon known as "hysteresis" may act as a roadblock for efforts to increase vaccination rates.