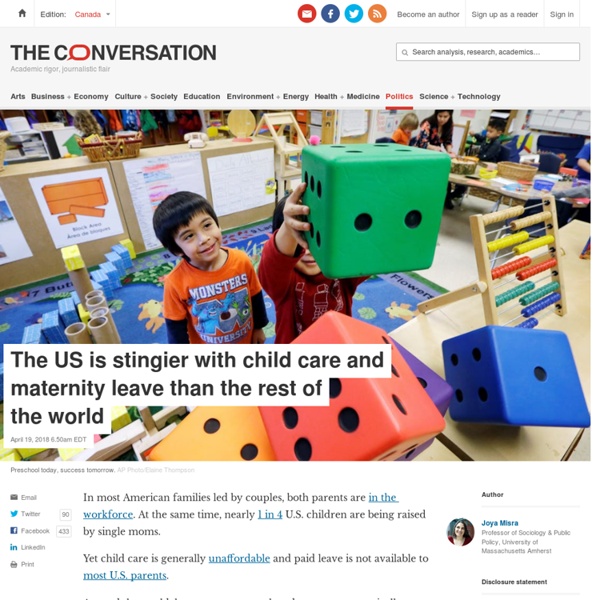 In most American families led by couples, both parents are in the workforce. At the same time, nearly 1 in 4 U.S. children are being raised by single moms. Yet child care is generally unaffordable and paid leave is not available to most U.S. parents. Around the world, however, most employed women automatically get paid maternity leave. And in most wealthy countries, they also have access to affordable child care. These holes in the national safety net are a problem for many reasons, including one I’ve been researching with my colleagues for years: Paid parental leave and child care help women stay in the workforce and earn higher wages over time. Maternity leave The U.S. is one of a handful of countries worldwide that does not mandate paid maternity leave. Paid leave, which typically lasts at least 14 weeks, needs to be designed thoughtfully. The 1993 Family and Medical Leave Act did mandate 12 weeks of unpaid job protected leave for some American workers. Child care

The policing of black Americans is racial harassment funded by the state The rap group Public Enemy famously stated that “911 is a joke”. But that was in 1990. These days 911 is dead serious. Anyone in the United States can dial those three numbers and summon people with guns and handcuffs to participate in their anti-black paranoia. Election interference has been going on for years. The reason? Voter purges In every American election there are some voters who show up to their polling place ready to cast a ballot, only to find their name isn’t on the registration list. The reason? Voter purges, an often flawed effort to update voter rolls by removing voters’ names from registration lists. Virginians fell victim in 2013, when nearly 39,000 voters were removed when the state relied on faulty data to determine which names should be deleted. In 2016 it was New Yorkers, when the New York City board of elections wrongly deleted more than 200,000 names. No area of America is immune, as purges have grown against the backdrop of a controversial supreme court decision in 2013 that gutted federal protections for voters.

My friend Denis Mukwege is a beacon for all men to follow Today’s announcement of the Nobel peace prize for Denis Mukwege, with co-winner Nadia Murad, is a deeply deserved recognition for an extraordinary man who has risked everything to heal, cherish and honour women. It is a call to men across the planet to do the same. There are many reasons why the world needs to know the story of my friend Mukwege, who founded the Panzi hospital and co-founded the City of Joy in the Democratic Republic of Congo. But in 2018, we need to hear that story more than ever.

On Father's Day, 27 Vintage Photos of Dads Around the World As the U.S. prepares to celebrate Father’s Day on the third Sunday of June, these photos of dads around the world show that a father’s love is universal. Unlike Mother’s Day, which began to be widely observed in 1908 and was quickly recognized as an official national holiday by President Woodrow Wilson in 1914, Father’s Day took several decades to be declared a national holiday. It was first celebrated in 1910 in Washington state but wasn’t officially recognized until 1972, when it was acknowledged by President Richard Nixon. Studies have shown that beyond the ubiquitous parenting experiences of wiping away tears over a skinned knee or cheering on the sidelines of a sports game, dads can have specific and important impacts on the lives of their children. Fathers who do their share of work at home can help shape their daughters' career goals. Thank you for signing up!

How the black middle class was attacked by Woodrow Wilson’s administration When Woodrow Wilson arrived in the nation’s capital in March 1913, he brought with him an administration loaded with white supremacists. Wilson’s lieutenants segregated offices, harassed black workers and removed black politicians from political appointments held by black men for more than a generation. Racism had always been a part of life in Washington and its government buildings, but the U.S. civil service had never been formally segregated prior to Wilson’s inauguration. More than a century later, Wilson’s racist legacy was called out by protesting students at Princeton University. In response, in November 2015 the university agreed to examine the past of the former university president whose name graces both a residential college and a graduate school.

I was an Isis sex slave. I tell my story because it is the best weapon I have The slave market opened at night. We could hear the commotion downstairs where militants were registering and organising, and when the first man entered the room, all the girls started screaming. It was like the scene of an explosion. Growing Up Surrounded by Books Has a Lasting Positive Effect on the Brain, Says a New Scientific Study Image by George Redgrave, via Flickr Commons Somewhere in the annals of the internet--if this sprawling, near-sentient thing we call the internet actually has annals--there is a fine, fine quote by filmmaker John Waters: We need to make books cool again.

The book that fights sexism with science When young men and women come up against sexist stereotypes masquerading as science, Angela Saini wants them to be armed with the facts. “I call my book ammunition,” she says of her 288-page prize-winning work Inferior: The True Power of Women and the Science that Shows It. “There are people out there who insist that somehow the inequalities we see in society are not just because of historic discrimination, but also because of biology – the idea that there are factors within us that will cause men or women to be better at some things than others.”

We don’t want billionaires’ charity. We want them to pay their taxes “Charity is a cold, grey loveless thing. If a rich man wants to help the poor, he should pay his taxes gladly, not dole out money at a whim.” It is a phrase commonly ascribed to Clement Attlee – the credit actually belongs to his biographer, Francis Beckett – but it elegantly sums up the case for progressive taxation.