North Korean Media Report Kim Jong-Un In Best Health Of Life After Receiving Hundreds Of Heart Transplants. Duffelblog. Kim Jong-un lashes out at Trump for getting 'Rocket Man' stuck in his head. PYONGYANG — North Korean dictator Kim Jong-un lashed out at President Donald Trump on Saturday, criticizing the president for getting the 1972 Elton John song “Rocket Man” stuck in his head for the past week. 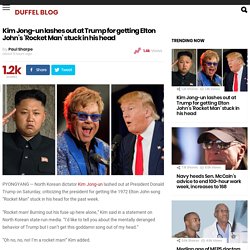 “Rocket man! Burning out his fuse up here alone,” Kim said in a statement on North Korean state-run media. “I’d like to tell you about the mentally deranged behavior of Trump but I can’t get this goddamn song out of my head.” “Oh no, no, no! I’m a rocket man!” In his speech to the UN on Tuesday, Trump called the North Korean regime “depraved,” adding that it was responsible for starvation, death, imprisonment, and torture of millions of its people. When mentioning the country’s leader, Trump said, “Rocket Man is on a suicide mission for himself and for his regime.”

“As soon as I heard that, I knew what was coming,” Kim said, then beginning to sing: “And I think it’s gonna be a long, long time.” Physically Fit, Emotionally Stable Kim Jong-Un Addresses UN After Finally Getting Nuclear Ambitions Out Of System. NEW YORK—Appearing to have undergone a complete transformation in both appearance and temperament, a physically fit and emotionally stable Kim Jong-Un calmly addressed the United Nations on Thursday after finally getting his nuclear ambitions out of his system. 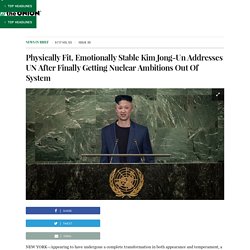 “Now that the nuclear stuff is over with, we we can finally get down to finding common ground on some pressing issues,” said the strikingly trim North Korean dictator, explaining to the UN General Assembly that when he gets really deep into a project like stockpiling weapons-grade plutonium and test-launching intercontinental ballistic missiles, he becomes “pretty much obsessed” and has to see it through to the end. “I know it was frustrating for the international community, but when I’m passionate about something, I just let it absorb my attention completely. 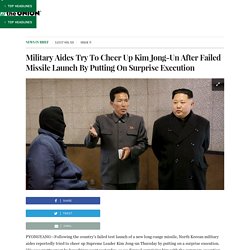 “He was pretty upset by how things went yesterday, so we figured surprising him with the summary execution of a government official would be a great way to boost his spirits,” said Vice Marshal Hwang Pyong-so, adding that aides had worked overnight to find a disloyal judge or Korean Workers’ Party official and arrange the execution in secret. “You should have seen the look on his face when he opened the door to what he thought was an ordinary cabinet meeting and found a former vice chairman of the Central Committee tied to a chair, with a revolver nearby.

He was smiling in no time and shot the enemy of the people in the face.” These 15 Photos Show Kim Jong Un Really Excited About Inspecting Things. Kim Jong Un Greets North Korean Female Fighter Pilots, The 'Flowers Of The Sky' The supreme leader of the Democratic People's Republic of Korea has reportedly met two of the country's female fighter pilots. 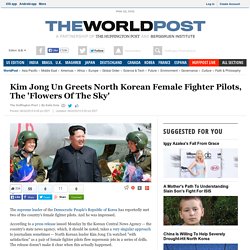 And he was impressed. According to a press release issued Monday by the Korean Central News Agency -- the country's state news agency, which, it should be noted, takes a very singular approach to journalism sometimes -- North Korean leader Kim Jong Un watched "with satisfaction" as a pair of female fighter pilots flew supersonic jets in a series of drills. The release doesn't make it clear when this actually happened. Kim reportedly called the pilots "very admirable" and "flowers of the sky. " (All quotes are taken from the text of the KCNA release; the North Korean leader is not directly quoted in the document.)

How did these women attain such airborne prowess? The women reportedly wept tears of joy as they clasped Kim's hands and received bouquets. Groundbreaking female pilots aside, the North Korean air force is said to be in bad shape. North Korean Military Developing Parade Capable Of Traveling 5,000 Miles - The Onion - America's Finest News Source. 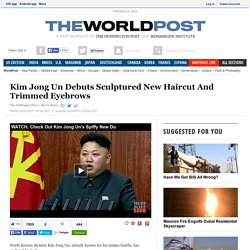 Kim's new hairstyle remains cropped on the sides and heavy on top, but he appears to have grown his hair out and had it sculpted into a trapezoidal shape. And, for good measure, it seems as if he's had his eyebrows trimmed: Diabetic, Gout-Ridden Kim Jong-Un By Far Healthiest Person In North Korea. PYONGYANG—Following reports that the head-of-state is receiving treatment for a variety of medical conditions, an Amnesty International report released Monday confirmed that the diabetic and gout-ridden dictator Kim Jong-un is still by far the healthiest individual in North Korea. 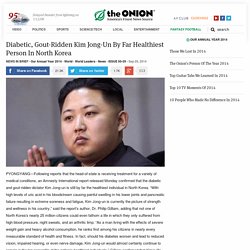 “With high levels of uric acid in his bloodstream causing painful swelling in his lower joints and pancreatic failure resulting in extreme soreness and fatigue, Kim Jong-un is currently the picture of strength and wellness in his country,” said the report’s author, Dr. Philip Gilliam, adding that not one of North Korea’s nearly 25 million citizens could even fathom a life in which they only suffered from high blood pressure, night sweats, and an arthritic limp. 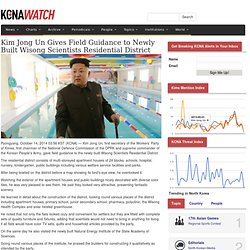 The residential district consists of multi-storeyed apartment houses of 24 blocks, schools, hospital, nursery, kindergarten, public buildings including various welfare service facilities and parks. After being briefed on the district before a map showing its bird's-eye view, he overlooked it. Watching the exterior of the apartment houses and public buildings nicely decorated with diverse color tiles, he was very pleased to see them. He said they looked very attractive, presenting fantastic scenery. On the same day he also visited the newly built Natural Energy Institute of the State Academy of Sciences. Kim Jong-Un’s Absence Leaves North Korean Government Officials No One To Agree With. PYONGYANG—Explaining that the highest levels of government were currently in a state of disarray, international affairs experts confirmed Friday that the continuing absence of Kim Jong-un had left top-ranking North Korean officials with nobody to agree with. 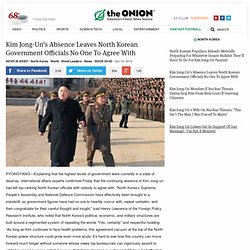 “North Korea’s Supreme People’s Assembly and National Defence Commission have effectively been brought to a standstill, as government figures have had no one to heartily concur with, repeat verbatim, and then congratulate for their careful thought and insight,” said Henry Lawrence of the Foreign Policy Research Institute, who noted that North Korea’s political, economic, and military structures are built around a regimented system of repeating the words “Yes, certainly” and respectful nodding.

“As long as Kim continues to face health problems, this agreement vacuum at the top of the North Korean power structure could grow even more acute. Bored Kim Jong-Un Stacks Entire North Korean Populace Into Human Pyramid To Kill Time. PYONGYANG—In an effort to relieve his boredom and fill an otherwise uneventful afternoon, North Korean leader Kim Jong-un stacked all 24 million of his country’s inhabitants into a human pyramid Friday to help him pass the time. 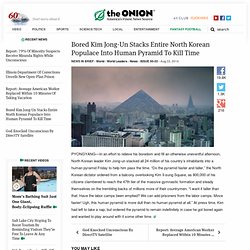 “Do the pyramid faster and taller,” the North Korean dictator ordered from a balcony overlooking Kim Il-sung Square, as 800,000 of his citizens clambered to reach the 47th tier of the massive gymnastic formation and steady themselves on the trembling backs of millions more of their countrymen. “I want it taller than that. Have the labor camps been emptied? We can add prisoners from the labor camps. Watch the viral dance video from China that's making North Korea reeeaaally mad. North Korea Celebrates As Kim Jong-Un Becomes First Man To Walk On Moon. PYONGYANG—Jubilation sounded far and wide in the North Korean capital today as upwards of 100,000 cheering citizens proudly thronged Kim Il-sung Square to celebrate the historic news that Dear Leader Kim Jong-un had become the first man to walk on the moon, ecstatic North Korean sources reported. 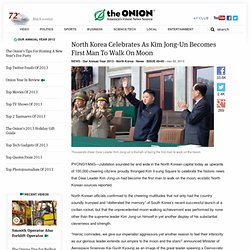 North Korean officials confirmed to the cheering multitudes that not only had the country soundly trumped and “obliterated the memory” of South Korea’s recent successful launch of a civilian rocket, but that the unprecedented moon-walking achievement was performed by none other than the supreme leader Kim Jong-un himself in yet another display of his substantial cleverness and strength. “Heroic comrades, we give our imperialist aggressors yet another reason to feel their inferiority as our glorious leader extends our empire to the moon and the stars!” The rapt crowd then erupted into pandemonium as celebratory rice rations, vitamin packs, and canned water were distributed. Kim Jong Un Inspects Mushroom Farm, Is All Smiles (PHOTOS) On Tuesday, North Korean state news agency Rodong Sinmun posted photos of leader Kim Jong Un's visit to a mushroom farm.

Has 8 million pre-painted portraits of himself ready to distribute to the populace at a moment's notice Displayed a complete disregard for U.N. resolutions from a very early age Pretty good friends with Putin's kids Has two nonfunctional but symbolic iron fists grafted onto his arms Projects a powerful authoritarian air over his countrymen by appearing adequately nourished Shares two out of three names with arguably the greatest leader in Far East Asian history Has shown a lifelong, devoted lack of interest in behaving normally in any way Is able to slap people across the face effectively with either hand On the day of Jong Un's birth, all farmers reaped twice as much from the earth, the rivers overflowed with carp, and the lapping ocean waves murmured the new leader's name. Events Leading Up To N. Korea Nuclear Test. No iPods To Kim Jong Il.

Kim Jong-Un, Justin Timberlake Meet To Pick New Pope, According To Shameless Attempt To Increase Web Traffic. North Korea Celebrates As Kim Jong-Un Becomes First Man To Walk On Moon. Kim Jong-Un Named The Onion's Sexiest Man Alive For 2012. The Onion is proud to announce that North Korean supreme leader Kim Jong-un, 29, has officially been named the newspaper’s Sexiest Man Alive for the year 2012. With his devastatingly handsome, round face, his boyish charm, and his strong, sturdy frame, this Pyongyang-bred heartthrob is every woman’s dream come true. Blessed with an air of power that masks an unmistakable cute, cuddly side, Kim made this newspaper’s editorial board swoon with his impeccable fashion sense, chic short hairstyle, and, of course, that famous smile.

“He has that rare ability to somehow be completely adorable and completely macho at the same time,” Onion Style and Entertainment editor Marissa Blake-Zweibel said. “And that’s the quality that makes him the sort of man women want, and men want to be. He’s a real hunk with real intensity who also knows how to cut loose and let his hair down.” Added Blake-Zweibel, “Ri Sol-ju is one lucky lady, that’s for sure!” In The Know: Kim Jong-Il's Approval Rating Plummets to 120% Those We Lost In 2011. Kim Jong Il Announces Plan To Bring Moon To North Korea.