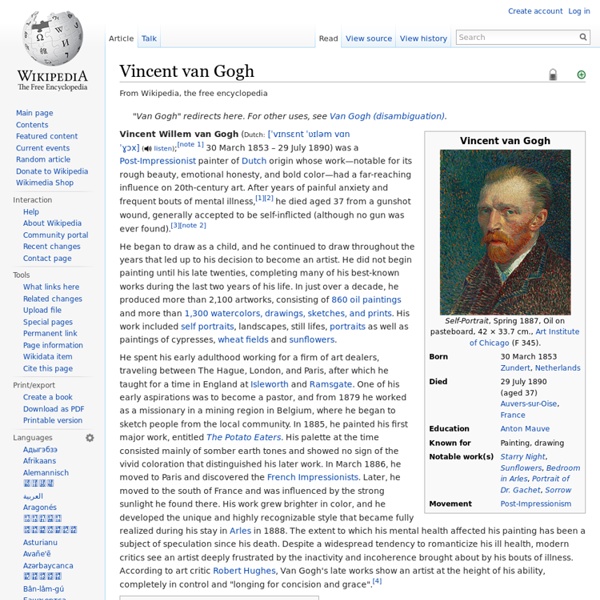 Vincent Willem van Gogh (Dutch: [ˈvɪnsɛnt ˈʋɪləm vɑn ˈɣɔx] ( );[note 1] 30 March 1853 – 29 July 1890) was a Post-Impressionist painter of Dutch origin whose work—notable for its rough beauty, emotional honesty, and bold color—had a far-reaching influence on 20th-century art. After years of painful anxiety and frequent bouts of mental illness,[1][2] he died aged 37 from a gunshot wound, generally accepted to be self-inflicted (although no gun was ever found).[3][note 2] Letters Vincent c. 1873 aged 19. This photograph was taken at the time when he was working at the branch of Goupil & Cie's gallery in The Hague.[5][6] Although many are undated, art historians have generally been able to put them in chronological order. Biography Early life Vincent c. 1866, approx. age 13 As a child, Vincent was serious, silent, and thoughtful. The house "Holme Court" in Isleworth, where Van Gogh stayed in 1876 [23][24] Van Gogh's religious zeal grew until he felt he had found his true vocation. Emerging artist

Dada Dada (/ˈdɑːdɑː/) or Dadaism was an art movement of the European avant-garde in the early 20th century. Dada in Zurich, Switzerland, began in 1916, spreading to Berlin shortly thereafter, but the height of New York Dada was the year before, in 1915.[1] The term anti-art, a precursor to Dada, was coined by Marcel Duchamp around 1913 when he created his first readymades.[2] Dada, in addition to being anti-war, had political affinities with the radical left and was also anti-bourgeois.[3] Francis Picabia, Dame! Illustration for the cover of the periodical Dadaphone, n. 7, Paris, March 1920 Overview[edit] Freemasonry Freemasonry is a fraternal organisation that traces its origins to the local fraternities of stonemasons, which from the end of the fourteenth century regulated the qualifications of masons and their interaction with authorities and clients. The degrees of freemasonry, its gradal system, retain the three grades of medieval craft guilds, those of Apprentice, journeyman or fellow (now called Fellowcraft), and Master Mason. These are the degrees offered by craft, or blue lodge Freemasonry.

Art History in Sherlock Holmes: Vincent Van Gogh and J.M.W. Turner « Art History Ramblings Amazing the art history references one can find in both the original stories and various adaptations. If you want to read about art history and the Mona Lisa subplot in the Granada adaptation of The Final Problem, I recommend Three Pipe Problem’s highly informative take on the story. Cut for spoilers Leviathan Claude Monet Oscar-Claude Monet (French: [klod mɔnɛ]; 14 November 1840 – 5 December 1926) was a founder of French Impressionist painting, and the most consistent and prolific practitioner of the movement's philosophy of expressing one's perceptions before nature, especially as applied to plein-air landscape painting.[1][2] The term "Impressionism" is derived from the title of his painting Impression, soleil levant (Impression, Sunrise), which was exhibited in 1874 in the first of the independent exhibitions mounted by Monet and his associates as an alternative to the Salon de Paris. Monet's ambition of documenting the French countryside led him to adopt a method of painting the same scene many times in order to capture the changing of light and the passing of the seasons. From 1883 Monet lived in Giverny, where he purchased a house and property, and began a vast landscaping project which included lily ponds that would become the subjects of his best-known works.

Henry Moore Henry Spencer Moore OM CH FBA RBS (30 July 1898 – 31 August 1986) was an English sculptor and artist. He was best known for his semi-abstract monumental bronze sculptures which are located around the world as public works of art. His forms are usually abstractions of the human figure, typically depicting mother-and-child or reclining figures. Moore's works are usually suggestive of the female body, apart from a phase in the 1950s when he sculpted family groups. His forms are generally pierced or contain hollow spaces. Many interpreters liken the undulating form of his reclining figures to the landscape and hills of his birthplace, Yorkshire.

Pablo Picasso Picasso, Henri Matisse and Marcel Duchamp are regarded as the three artists who most defined the revolutionary developments in the plastic arts in the opening decades of the 20th century, responsible for significant developments in painting, sculpture, printmaking and ceramics.[4][5][6][7] Picasso demonstrated extraordinary artistic talent in his early years, painting in a realistic manner through his childhood and adolescence. During the first decade of the 20th century, his style changed as he experimented with different theories, techniques, and ideas. His work is often categorised into periods. While the names of many of his later periods are debated, the most commonly accepted periods in his work are the Blue Period (1901–1904), the Rose Period (1904–1906), the African-influenced Period (1907–1909), Analytic Cubism (1909–1912), and Synthetic Cubism (1912–1919). Early life

27 Science Fictions That Became Science Facts In 2012 We may never have our flying cars, but the future is here. From creating fully functioning artificial leaves to hacking the human brain, science made a lot of breakthroughs this year. 1. Quadriplegic Uses Her Mind to Control Her Robotic Arm Michelangelo Michelangelo di Lodovico Buonarroti Simoni (6 March 1475 – 18 February 1564), commonly known as Michelangelo (Italian pronunciation: [mikeˈlandʒelo]), was an Italian sculptor, painter, architect, poet, and engineer of the High Renaissance who exerted an unparalleled influence on the development of Western art.[1] Despite making few forays beyond the arts, his versatility in the disciplines he took up was of such a high order that he is often considered a contender for the title of the archetypal Renaissance man, along with his fellow Italian Leonardo da Vinci. In a demonstration of Michelangelo's unique standing, he was the first Western artist whose biography was published while he was alive.[2] Two biographies were published of him during his lifetime; one of them, by Giorgio Vasari, proposed that he was the pinnacle of all artistic achievement since the beginning of the Renaissance, a viewpoint that continued to have currency in art history for centuries. Life Early life, 1475-88

Barbara Hepworth Dame Barbara Hepworth DBE (10 January 1903 – 20 May 1975) was an English artist and sculptor. Her work exemplifies Modernism and in particular modern sculpture. She was "one of the few women artists to achieve international prominence.