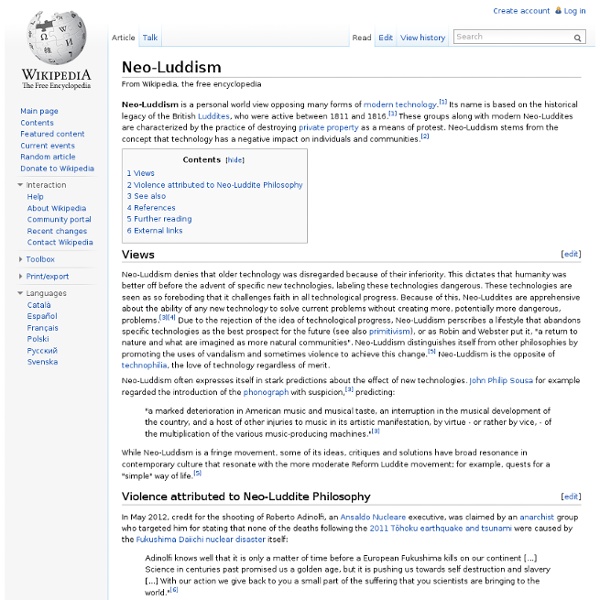 A novel written by Edward Abbey which concerns the use of sabotage to protest environmentally damaging activities in the American Southwest. Neo-Luddism or New Luddism is a philosophy opposing many forms of modern technology.[1] According to a manifesto drawn up by the Second Luddite Congress (April 1996; Barnesville, Ohio) Neo-Luddism is "a leaderless movement of passive resistance to consumerism and the increasingly bizarre and frightening technologies of the Computer Age." [2] The name is based on the historical legacy of the British Luddites, who were active between 1811 and 1816.[1] These groups along with some modern Neo-Luddites are characterized by the practice of destroying or abandoning the use of technological equipment as well as advocating simple living. Neo-Luddism stems from the concept that technology has a negative impact on individuals, their communities and the environment.[3] Neo-Luddites also fear the future unknown effects that new technologies might unleash. Related:  Philosophy

Philosophy | Periodic Table The Periodic Table of the Chemical Elements is a cultural icon and an extraordinary object in science space. This page explores what the periodic table is in terms of basic & simple elemental substance, quantum theory and the philosophy of science. Introduction A classic periodic table can be viewed at WebElements: WebElements employs the most common of many possible formulations, and these can be explored using the INTERNET Database of Periodic Tables and Periodic Table Formulations, on the next page of this webbook, here. The vast majority of Periodic Tables – and the excellent WebElements is a perfect example – are used to arrange physical, chemical, technological & historical data/information about the chemical elements in a systematic way. Check out the various way that physical, chemical, technological & historical data/information are mapped to the Periodic Table, here. It transpires that matters are a little more involved than they may at first appear... Morphing Multi-PTs © Mark R.

Why the Western philosophical canon is xenophobic and racist Mainstream philosophy in the so-called West is narrow-minded, unimaginative, and even xenophobic. I know I am levelling a serious charge. But how else can we explain the fact that the rich philosophical traditions of China, India, Africa, and the Indigenous peoples of the Americas are completely ignored by almost all philosophy departments in both Europe and the English-speaking world? Western philosophy used to be more open-minded and cosmopolitan. One of the major Western philosophers who read with fascination Jesuit accounts of Chinese philosophy was Gottfried Wilhelm Leibniz (1646-1716). The German philosopher Christian Wolff echoed Leibniz in the title of his public lecture Oratio de Sinarum Philosophia Practica, or Discourse on the Practical Philosophy of the Chinese (1721). Chinese philosophy was also taken very seriously in France. Subscribe to Aeon’s Newsletter Leibniz, Wolff and Quesnay are illustrations of what was once a common view in European philosophy. 1. 2. 3. 4.

To tell someone they're wrong, first tell them how they're right — Quartz The 17th century philosopher Blaise Pascal is perhaps best known for Pascal’s Wager which, in the first formal use of decision theory, argued that believing in God is the most pragmatic decision. But it seems the French thinker also had a knack for psychology. As Brain Pickings points out, Pascal set out the most effective way to get someone to change their mind, centuries before experimental psychologists began to formally study persuasion: When we wish to correct with advantage, and to show another that he errs, we must notice from what side he views the matter, for on that side it is usually true, and admit that truth to him, but reveal to him the side on which it is false. Pascal added: People are generally better persuaded by the reasons which they have themselves discovered than by those which have come into the mind of others. Put simply, Pascal suggests that before disagreeing with someone, first point out the ways in which they’re right.

Alan Watts on the Most Important Realization You Can Come to About Life If you haven’t heard of Alan Watts, he was a famous philosopher, speaker and writer on mindfulness, Buddhism and eastern philosophy. Coming from Britain, Alan Watts was one of the first pioneers to popularize these teachings for a western audience. Here is a profound quote from one of his talks: “[Successful meditation brings about realizations:] That we are no longer this poor little stranger and afraid in a world it never made. But that you are this universe and you are creating it in every moment… Because you see it starts now, it didn’t begin in the past, there was no past. See, if the universe began in the past when that happened it was now; see, but it’s still now — and the universe is still beginning now, and it’s trailing off like the wake of a ship from now, and that wake fades out so does the past. Alan Watts has also concluded that living in the present moment is the real secret of life:

Panpsychism: The idea that everything from spoons to stones are conscious is gaining academic credibility In the tumultuous months after protests and riots wracked Jakarta, bringing down Indonesian president Haji Muhammad Suharto in May 1998, a British political consultancy arrived on the scene. SCL Group, the parent company of Cambridge Analytica (CA), says it came to southeast Asia’s most populous nation at the behest of “pro-democratic groups” to “assist with a national campaign of political reform and democratization.” The country was still reeling from the Asian economic crisis that started in 1997 and the exit of a leader who had held on to power for three decades. The British firm’s assignment eventually included surveying thousands of Indonesians, managing communications for politicians and, most curiously, organizing large rallies at universities to help students “let off steam,” according to company documents accessed by Quartz. The documents, issued around 2013, also highlight SCL’s role in nearby countries. After Suharto’s fall “Large rallies were organised at each university.

An Animated Introduction to French Philosopher Jacques Derrida Since the bold arrival of his book Of Grammatology in 1967, French philosopher Jacques Derrida has been understood—or misunderstood—as many things: a radical relativist who ”rejects all of metaphysical history,” a fashionable intellectual playing language games, a brilliant phenomenologist of language…. One association he vehemently rejected was with the kind of ironic, laissez faire postmodernism represented by Seinfeld. But when it came to clarifying his work for puzzled readers and onlookers, Derrida could seem as willfully, frustratingly evasive in person as he was on the page. Most people familiar with some of Derrida’s work know a few key terms of his thought: différance, trace, aporia, pharmakon. Derrida’s meditations on the inability of language to contain or communicate natural or metaphysical truth developed in unique life circumstances. Nonetheless, Derrida would not have made much of his place as the author, this being only a rhetorical occasion for analysis.

Trailblazing Physicist David Bohm and Buddhist Monk Matthieu Ricard on How We Shape What We Call Reality We never see the world exactly as it is — our entire experience of it is filtered through the screen of our longings and our fears, onto which project the interpretation we call reality. The nature of that flickering projection has captivated the human imagination at least since Plato’s famous Allegory of the Cave. Philip K. That’s what molecular biologist turned Buddhist monk Matthieu Ricard and Buddhist-raised astrophysicist Trinh Thuan explore in The Quantum and the Lotus: A Journey to the Frontiers Where Science and Buddhism Meet (public library) — an infinitely mind-bending conversation at the intersection of science and philosophy. In considering the constructed nature of reality, Ricard quotes from a 1977 Berkeley lecture by David Bohm (December 20, 1917–October 27, 1992), in which the trailblazing theoretical physicist offered an exquisite formulation of the interplay between our beliefs and what we experience as reality: Reality is what we take to be true. Ricard adds:

Oxford's Free Introduction to Philosophy: Stream 41 Lectures You don't need to go to Oxford to study philosophy. Not when it will come to you. Above, find a playlist that features 41 lectures from Oxford's course called General Philosophy. Here's what it has to offer: A series of lectures delivered by Peter Millican to first-year philosophy students at the University of Oxford. Philosophers covered in the course include Aristotle, Descartes, Hobbes, Locke, Berkeley and Hume. The lectures can be accessed on YouTube, iTunes or the Web. Follow Open Culture on Facebook and Twitter and share intelligent media with your friends. If you'd like to support Open Culture and our mission, please consider making a donation to our site. Related Content: Download 100 Free Online Philosophy Courses & Start Living the Examined Life Death: A Free Philosophy Course from Yale 135 Free Philosophy eBooks

Introduction to Philosophy/The Branches of Philosophy The Branches of Philosophy[edit] Western philosophy can be divided into six branches that have assumed various importance over time. Traditionally metaphysics sets the questions for philosophy. Understanding philosophy in the 6th century b.c. involves taking into account different priorities than those of the 19th century a.d. Epistemology[edit] The theory of knowledge, from the Greek words episteme (knowledge) and logos (word/speech), is the branch of philosophy that deals with the nature, origin, scope and possibility of knowledge. [edit] Metaphysics however (derived from the Greek words " meta & physika ") - meaning 'after physics'. Logic[edit] Logic (from Classical Greek λόγος (logos), originally meaning the word, or what is spoken, but coming to mean thought or reason) is most often said to be the study of arguments. Ethics[edit] Ethics is a general term for what is often described as the "science (study) of morality". Aesthetics[edit] Other Branches[edit]