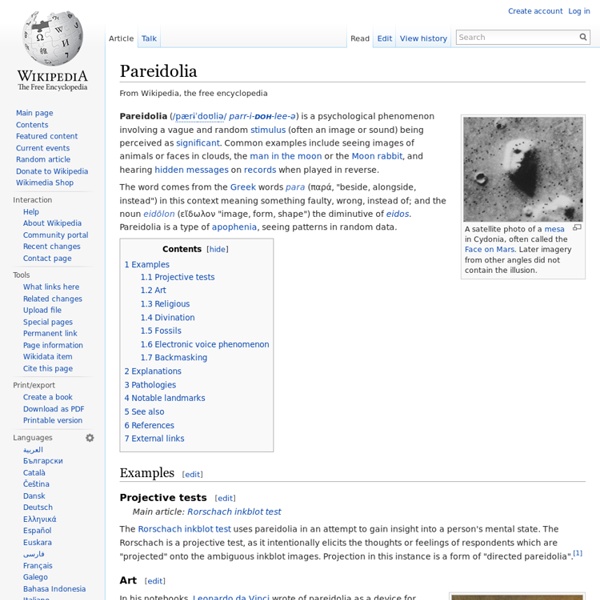 A satellite photo of a mesa in Cydonia, often called the Face on Mars. Later imagery from other angles did not contain the illusion. Examples[edit] Projective tests[edit] The Rorschach inkblot test uses pareidolia in an attempt to gain insight into a person's mental state. Art[edit] In his notebooks, Leonardo da Vinci wrote of pareidolia as a device for painters, writing "if you look at any walls spotted with various stains or with a mixture of different kinds of stones, if you are about to invent some scene you will be able to see in it a resemblance to various different landscapes adorned with mountains, rivers, rocks, trees, plains, wide valleys, and various groups of hills. Religious[edit] Publicity surrounding sightings of religious figures and other surprising images in ordinary objects has spawned a market for such items on online auctions like eBay. Divination[edit] Various European ancient divination practices involve the interpretation of shadows cast by objects. Fossils[edit] Related:  Wikipedia

Semantic satiation History and research[edit] The phrase "semantic satiation" was coined by Leon Jakobovits James in his doctoral dissertation at McGill University, Montreal, Canada awarded in 1962.[1] Prior to that, the expression "verbal satiation" had been used along with terms that express the idea of mental fatigue. The dissertation listed many of the names others had used for the phenomenon: "Many other names have been used for what appears to be essentially the same process: inhibition (Herbert, 1824, in Boring, 1950), refractory phase and mental fatigue (Dodge, 1917; 1926a), lapse of meaning (Bassett and Warne, 1919), work decrement (Robinson and Bills, 1926), cortical inhibition (Pavlov, 192?) The explanation for the phenomenon was that verbal repetition repeatedly aroused a specific neural pattern in the cortex which corresponds to the meaning of the word. Applications[edit] In popular culture[edit] See also[edit] References[edit] Further reading[edit] Dodge, R.

Made in China: European Clone Towns Taking counterfeiting to a whole new level… Paris in China In the outskirts of Shanghai stands a fake Eiffel Tower overlooking a replica of the Champ de Mars and rows of Parisian townhouses. This is not Disneyland in China, this is the gated community of Tianducheng, built in 2007 by real estate develepors Zhejiang Guangsha Co. Ltd. Rather mysteriously, very little information about the town has been made available since it’s opening in 2007. The last known population of Tianducheng is around 2,000, yet the town can comfortably house over 100,000 people. More than anything, Tianducheng is a popular place for young newlyweds to use for their wedding photography, using the fake Paris as a backdrop. This is Hallstatt, Austria: And this is it’s Chinese knock-off: A replica of an entire historical Austrian town was unveiled in the Chinese province of Guangdong earlier this year. Hallstatt: Not Hallstatt: Little London in China Photos via here, here, here and here.

Proprioception The cerebellum is largely responsible for coordinating the unconscious aspects of proprioception. Proprioception (/ˌproʊpri.ɵˈsɛpʃən/ PRO-pree-o-SEP-shən), from Latin proprius, meaning "one's own", "individual" and perception, is the sense of the relative position of neighbouring parts of the body and strength of effort being employed in movement.[1] It is provided by proprioceptors in skeletal striated muscles and in joints. It is distinguished from exteroception, by which one perceives the outside world, and interoception, by which one perceives pain, hunger, etc., and the movement of internal organs. The brain integrates information from proprioception and from the vestibular system into its overall sense of body position, movement, and acceleration. The word kinesthesia or kinæsthesia (kinesthetic sense) has been used inconsistently to refer either to proprioception alone or to the brain's integration of proprioceptive and vestibular inputs. History of study[edit] Components[edit]

Hallstat chinese copy Just one year after announcing ambitious plans to copy of a small idyllic Austrian mountain village, Chinese developers have unveiled their clone hamlet. Located just outside the southeastern city of Huizhou, the new village is a close approximation of Hallstatt, Vienna, complete with rows of pastel-colored chalets, architectural finials, and even an exact replica of the town clock tower that characterize the 900-year old original. Overseen and operated by Minmetals Land Inc., the $940 million project was recently completed, with Halstatt mayor Alexander Scheutz on hand to open the complex to tourists this past Saturday. When news of the project spread last summer, Hallstatt residents expressed outrage at the idea of the Chinese fake, threatening to make an appeal to UNESCO to potentially halt the building. As Reuters reports, the Chinese Hallstatt is comprised of expensive housing units for the city’s nouveau riche, with other shops and sites for tourists.

Closed-eye hallucination Closed-eye hallucinations and closed-eye visualizations (CEV) are a distinct class of hallucination. These types of hallucinations generally only occur when one's eyes are closed or when one is in a darkened room. They can be a form of phosphene. Certain users report closed-eye hallucinations under the influence of psychedelics. Levels of CEV perception[edit] There are five known levels of CEV perception which can be achieved either through chemical stimuli or through meditative relaxation techniques. Level 1: Visual noise[edit] CEV noise simulation The most basic form of CEV perception that can be immediately experienced in normal waking consciousness involves a seemingly random noise of pointillistic light/dark regions with no apparent shape or order. This can be seen when the eyes are closed and looking at the back of the eyelids. Level 2: Light/dark flashes[edit] Level 3: Patterns, motion, and color[edit] Level 4: Objects and things[edit] This is a fairly deep state. Corneal liquid[edit]

Breast-shaped hill Overview[edit] The name Mamucium that gave origin to the name of the city of Manchester is thought to derive from the Celtic language meaning "breast-shaped hill", referring to the sandstone bluff on which the fort stood; this later evolved into the name Manchester.[2][3] Mostly breast-shaped hills are connected with local ancestral veneration of the breast as a symbol of fertility and well-being. It is not uncommon for very old archaeological sites to be located in or below such hills, as on Samson, Isles of Scilly, where there are large ancient burial grounds both on the North Hill and South Hill,[4][5] or Burrén and Burrena, Aragon, Spain, where two Iron Age Urnfield culture archaeological sites lie beneath the hills.[6] Travelers and cartographers in colonial times often changed the ancestral names of such hills. Africa[edit] African Great Lakes Horn of Africa Naasa Hablood in Somalia Indian Ocean Southern Africa Omatako Mountain south-west of Otjiwarongo in Namibia West Africa In fiction Cuba

Centralia Mine Fire Centralia, Pennsylvania No one knows exactly how it started, but a coal vein has been burning under the Pennsylvania mining town of Centralia since 1961. Some trace it back to careless trash incineration in an open pit mine igniting a coal vein. The fire crawled, insidiously, along coal-rich deposits far from the miner's pick, venting hot and poisonous gases up into town, through the basements of homes and businesses. With dawning horror, residents came to realize that the fire was not going to be extinguished, or ever burn itself out -- at least not until all the interconnected coal veins in eastern Pennsylvania were spent in some epic, meatless barbecue. The government eventually stepped in, and Centralia joined an elite club of communities, including Love Canal and Times Beach. We first visited in the mid-1980s, when 80% of Centralia had already been abandoned. Today, still no trench, but charred remains of Centralia hang on. It's dusk, and we don't see any signs of the fire.

Wahhabism Wahhabism (Arabic: وهابية‎, Wahhābiyyah) is a religious movement or sect or branch of Sunni Islam[1][2][3] variously described as "orthodox", "ultraconservative",[4] "austere", "fundamentalist", "puritanical"[5] (or "puritan"),[6] an Islamic "reform movement" to restore "pure monotheistic worship",[7] or an "extremist pseudo-Sunni movement".[8] It aspires to return to the earliest fundamental Islamic sources of the Quran and Hadith, with inspiration from the teachings of Medieval theologian Ibn Taymiyyah and early jurist Ahmad ibn Hanbal.[9] Etymology[edit] According to Saudi writer Abdul Aziz Qassim, it was the Ottomans who "first labelled Abdul Wahhab's school of Islam in Saudi Arabia as Wahhabism". Wahhabis do not like—or at least did not like—the term. Naming controversy: Wahhabism and Salafism[edit] According to Robert Lacey "the Wahhabis have always disliked the name customarily given to them" and preferred to be called Muwahhidun. One American Scholar (Christopher M. History[edit]

Final girl The term was coined by Carol J. Clover in her 1992 book Men, Women, and Chainsaws: Gender in the Modern Horror Film. Clover suggests that in these films, the viewer begins by sharing the perspective of the killer, but experiences a shift in identification to the final girl partway through the film. Trope concept[edit] One of the basic premises of Clover's theory is that audience identification is unstable and fluid across gender lines, particularly in the case of the slasher film. The film Behind the Mask: The Rise of Leslie Vernon (2006) explains and talks extensively about this popular horror film convention (although in the film, it is referred to as "survivor girl"), even using it as a major plot device. Examples of final girls[edit] Christine Cornea disputes the idea that Ripley is a final girl, contrasting Clover's analysis of the character with that of Barbara Creed, who presents Ripley as "the reassuring face of womanhood". Also, twists have been put on the Final girl trope.

Petra and the Nabataeans This Bible History Daily article was originally published in 2012. It has been updated.—Ed. Who were the Nabataeans? For every tourist who visits the ancient city of Petra in modern-day Jordan, there is one breathtaking moment that captures all of the grandeur and mystery of this city carved in stone. The façade, popularly known as the Khazneh, or “Treasury,” appears first only as a faint vision, its architectural details and full dimensions crowded out by the darkened walls of the Siq. The Khazneh is both unexpectedly familiar, and at the same time, strangely exotic. Al-Khazneh (“the Treasury”), likely a tomb or monument to King Aretas IV who ruled over the Nabataeans from 9 B.C. to 40 A.D. In many ways, the Khazneh epitomizes the complex character and competing ambitions of the Nabataeans, the industrious Arab people who built the city of Petra and its towering rock-cut monuments (including the Khazneh) over 2,000 years ago. Not a BAS Library member yet? Glenn J.

St. Elmo's fire St. Elmo's fire on a ship at sea St. Elmo's fire is named after St. Erasmus of Formia (also called St. Characteristics[edit] In 1751, Benjamin Franklin hypothesized that a pointed iron rod would light up at the tip during a lightning storm, similar in appearance to St. Cause[edit] Conditions that can generate St.Elmo's fire are present during thunderstorms, when high voltage differentials are present between clouds and the ground underneath. The nitrogen and oxygen in the Earth's atmosphere cause St. Notable observations[edit] Welsh mariners knew it as canwyll yr ysbryd ("spirit-candles") or canwyll yr ysbryd glân ("candles of the Holy Ghost"), or the "candles of St. References to St. In 15th-century Ming China, Admiral Zheng He and his associates composed the Liujiagang and Changle inscriptions, the two epitaphs of the treasure voyages where they made a reference to St. Weeks earlier, reportedly on January 17, 1817, a luminous snowstorm occurred in Vermont and New Hampshire. St. St.