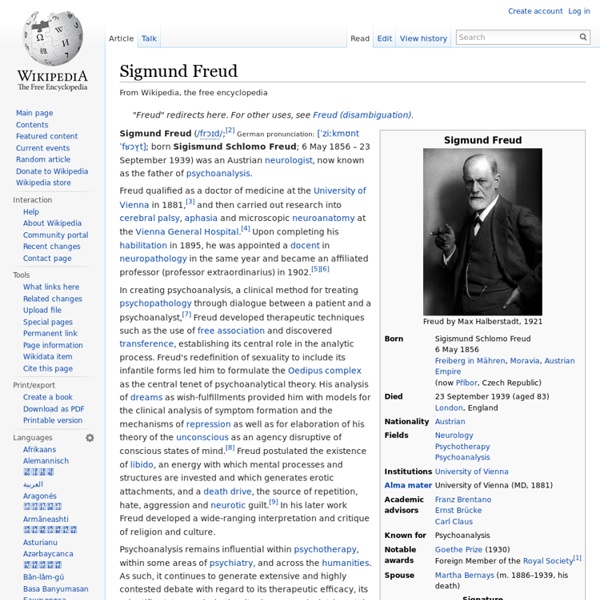 Sigmund Freud (/frɔɪd/;[2] German pronunciation: [ˈziːkmʊnt ˈfʁɔʏ̯t]; born Sigismund Schlomo Freud; 6 May 1856 – 23 September 1939) was an Austrian neurologist, now known as the father of psychoanalysis. Freud qualified as a doctor of medicine at the University of Vienna in 1881,[3] and then carried out research into cerebral palsy, aphasia and microscopic neuroanatomy at the Vienna General Hospital.[4] Upon completing his habilitation in 1895, he was appointed a docent in neuropathology in the same year and became an affiliated professor (professor extraordinarius) in 1902.[5][6] Psychoanalysis remains influential within psychotherapy, within some areas of psychiatry, and across the humanities. As such, it continues to generate extensive and highly contested debate with regard to its therapeutic efficacy, its scientific status, and whether it advances or is detrimental to the feminist cause.[10] Nonetheless, Freud's work has suffused contemporary Western thought and popular culture.

Related:  the function of reason - Whitehead • The problems with philosophy

Special relativity Special relativity implies a wide range of consequences, which have been experimentally verified,[2] including length contraction, time dilation, relativistic mass, mass–energy equivalence, a universal speed limit, and relativity of simultaneity. It has replaced the conventional notion of an absolute universal time with the notion of a time that is dependent on reference frame and spatial position. Rather than an invariant time interval between two events, there is an invariant spacetime interval. en.m.wikipedia We ask you, humbly: don't scroll away. Hi, reader in Canada, it seems you use Wikipedia a lot; that's great! It's a little awkward to ask, but this Saturday we need your help. Time is running out in 2019 to help us. We’re a non-profit and we don't have salespeople. We depend on donations averaging $15, and fewer than 2% of readers give.

Magna Graecia Cities of Magna Graecia and other Greek settlements in Italy (in red) Antiquity[edit] According to Strabo, Magna Graecia's colonization had already begun by the time of the Trojan War and lasted for several centuries.[2] In the 8th and 7th centuries BC, for various reasons, including demographic crises (famine, overcrowding, etc.), the search for new commercial outlets and ports, and expulsion from their homeland, Greeks began to settle in southern Italy (Cerchiai, pp. 14–18). Also during that period, Greek colonies were established in places as widely separated as the eastern coast of the Black Sea, Eastern Libya and Massalia (Marseille).

Cubism A primary influence that led to Cubism was the representation of three-dimensional form in the late works of Paul Cézanne, which were displayed in a retrospective at the 1907 Salon d'Automne.[3] In Cubist artwork, objects are analyzed, broken up and reassembled in an abstracted form—instead of depicting objects from one viewpoint, the artist depicts the subject from a multitude of viewpoints to represent the subject in a greater context.[4] Conception and origins[edit] Pablo Picasso, 1909-10, Figure dans un Fauteuil (Seated Nude, Femme nue assise), oil on canvas, 92.1 x 73 cm, Tate Modern, London Cubism began between 1907 and 1911. Pablo Picasso's 1907 painting Les Demoiselles d'Avignon has often been considered a proto-Cubist work. Georges Braque's 1908 Houses at L’Estaque (and related works) prompted the critic Louis Vauxcelles to refer to bizarreries cubiques (cubic oddities).

en.m.wikipedia We ask you, humbly: don't scroll away. Hi, reader in Canada, it seems you use Wikipedia a lot; that's great! It's a little awkward to ask, but this Saturday we need your help. Time is running out in 2019 to help us. We’re a non-profit and we don't have salespeople. We depend on donations averaging $15, and fewer than 2% of readers give. Crotone Coordinates: in Calabria, Italy Crotone (Italian: [kroˈtoːne] History[edit] Fauvism Artists and style[edit] Press clipping, Les Fauves: Exhibition at the Salon d'Automne, in L'Illustration, 4 November 1905 Besides Matisse and Derain, other artists included Albert Marquet, Charles Camoin, Louis Valtat, the Belgian painter Henri Evenepoel, Maurice Marinot, Jean Puy, Maurice de Vlaminck, Henri Manguin, Raoul Dufy, Othon Friesz, Georges Rouault, Jean Metzinger, the Dutch painter Kees van Dongen and Georges Braque (subsequently Picasso's partner in Cubism).[1] The paintings of the Fauves were characterized by seemingly wild brush work and strident colors, while their subject matter had a high degree of simplification and abstraction.[3] Fauvism can be classified as an extreme development of Van Gogh's Post-Impressionism fused with the pointillism of Seurat[3] and other Neo-Impressionist painters, in particular Paul Signac. Fauvism can also be seen as a mode of Expressionism.[3]

Is The Universe A Hologram? Michael Talbot discusses David Bohm and Karl Pribrim’s Research on the Holograph Universe. With Introduction and Commentary by Maryann Miller - Michael Talbot, who passed through transition in 1992, at the age of 38, was the author of several books on holograms and quantum mechanics and their relationship to ancient mysticism and the theoretical models of reality. Talbot explored the works of physicist David Bohm and neurophysiologist Karl Pribram, who independently reached the conclusion that the universe operates on a holographic model.

www.britannica Nicolas Boileau, in full Nicolas Boileau-Despréaux, (born November 1, 1636, Paris, France—died March 13, 1711, Paris), poet and leading literary critic in his day, known for his influence in upholding Classical standards in both French and English literature. He was the son of a government official who had started life as a clerk. Boileau made good progress at the Collège d’Harcourt and was encouraged to take up literary work by his brother Gilles Boileau, who was already established as a man of letters. He began by writing satires (c. 1658), attacking well-known public figures, which he read privately to his friends. After a printer who had managed to obtain the texts published them in 1666, Boileau brought out an authenticated version (March 1666) that he toned down considerably from the original.