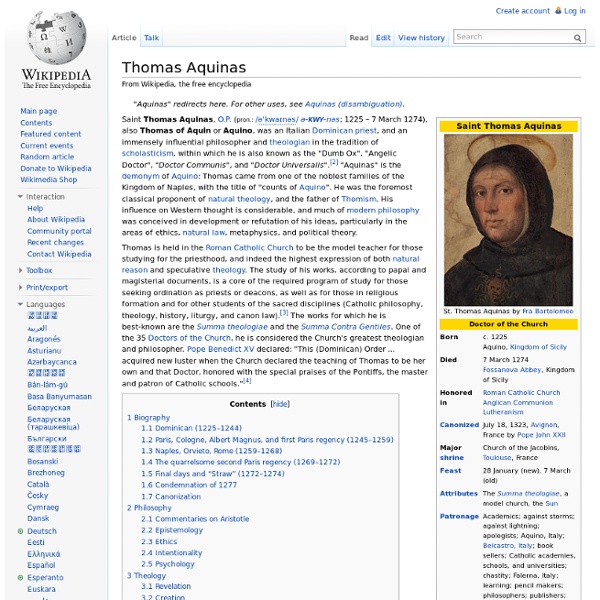 He was the foremost classical proponent of natural theology, and the father of Thomism. His influence on Western thought is considerable, and much of modern philosophy was conceived in development or refutation of his ideas, particularly in the areas of ethics, natural law, metaphysics, and political theory. Unlike many currents in the Church of the time,[6] Thomas embraced several ideas put forward by Aristotle — whom he referred to as "the Philosopher" — and attempted to synthethise Aristotelian philosophy with the principles of Christianity.[7] The works for which he is best known are the Summa Theologica and the Summa contra Gentiles. His commentaries on Sacred Scripture and on Aristotle are an important part of his body of work. Thomas is honored as a saint by the Catholic Church and is held to be the model teacher for those studying for the priesthood, and indeed the highest expression of both natural reason and speculative theology. Biography[edit] Dominican (1225–1274)[edit] Related:  Wikipedia A • Philosophy

Divine grace Divine grace is a theological term present in many religions. It has been defined as the divine influence which operates in humans to regenerate and sanctify, to inspire virtuous impulses, and to impart strength to endure trial and resist temptation;[1] and as an individual virtue or excellence of divine origin.[2] Christianity[edit] Grace in Christianity is the free and unmerited favour of God as manifested in the salvation of sinners and the bestowing of blessings.[3] It is God's gift of salvation granted to sinners for their salvation. Common Christian teaching is that grace is unmerited mercy (favor) that God gave to humanity by sending his son to die on a cross, thus delivering eternal salvation. Hinduism[edit] Islam[edit] Dr. See also[edit] References[edit] Jump up ^ OED, 2nd ed.: grace(n), 11bJump up ^ OED, 2nd ed.: grace(n), 11eJump up ^ OED, 2nd ed.: grace(n), 11aJump up ^ Gothard, Bill. Sources[edit]

Aristotle Aristotle's views on physical science profoundly shaped medieval scholarship. Their influence extended into the Renaissance and were not replaced systematically until the Enlightenment and theories such as classical mechanics. Some of Aristotle's zoological observations, such as on the hectocotyl (reproductive) arm of the octopus, were not confirmed or refuted until the 19th century. His works contain the earliest known formal study of logic, which was incorporated in the late 19th century into modern formal logic. His ethics, though always influential, gained renewed interest with the modern advent of virtue ethics. The sum of his work's influence often ranks him among the world's top personalities of all time with the greatest influence, along with his teacher Plato, and his pupil Alexander the Great.[9][10] Life At about the age of eighteen, Aristotle moved to Athens to continue his education at Plato's Academy. Aristotle was appointed as the head of the royal academy of Macedon. Logic

Teresa of Ávila Teresa of Ávila, also called Saint Teresa of Jesus, baptized as Teresa Sánchez de Cepeda y Ahumada (28 March 1515 – 4 October 1582), was a prominent Spanish mystic, Roman Catholic saint, Carmelite nun, an author of the Counter Reformation and theologian of contemplative life through mental prayer. She was a reformer of the Carmelite Order and is considered to be a founder of the Discalced Carmelites along with John of the Cross. In 1622, forty years after her death, she was canonized by Pope Gregory XV and on 27 September 1970, was named a Doctor of the Church by Pope Paul VI.[5] Her books, which include her autobiography (The Life of Teresa of Jesus) and her seminal work El Castillo Interior (trans.: The Interior Castle) are an integral part of Spanish Renaissance literature as well as Christian mysticism and Christian meditation practices as she entails in her other important work, Camino de Perfección (trans.: The Way of Perfection). Early life[edit] Activities as reformer[edit]

Ayn Rand In 1957, she published her best-known work, the novel Atlas Shrugged. Afterward, she turned to non-fiction to promote her philosophy, publishing her own magazines and releasing several collections of essays until her death in 1982. Rand advocated reason as the only means of acquiring knowledge and rejected faith and religion. She supported rational and ethical egoism, and rejected ethical altruism. In politics, she condemned the initiation of force as immoral[3] and opposed collectivism and statism as well as anarchism, instead supporting a minarchist limited government and laissez-faire capitalism, which she believed to be the only social system that protected individual rights. In art, Rand promoted romantic realism. Life[edit] Early life[edit] Rand was born Alisa Zinov'yevna Rosenbaum (Russian: Али́са Зиновьевна Розенбаум) on February 2, 1905, to a Russian Jewish bourgeois[11] family living in Saint Petersburg. Arrival in the United States[edit] Early fiction[edit]

Divine Comedy Dante shown holding a copy of the Divine Comedy, next to the entrance to Hell, the seven terraces of Mount Purgatory and the city of Florence, with the spheres of Heaven above, in Michelino's fresco On the surface, the poem describes Dante's travels through Hell, Purgatory, and Heaven;[4] but at a deeper level, it represents, allegorically, the soul's journey towards God.[5] At this deeper level, Dante draws on medieval Christian theology and philosophy, especially Thomistic philosophy and the Summa Theologica of Thomas Aquinas.[6] Consequently, the Divine Comedy has been called "the Summa in verse".[7] The work was originally simply titled Commedìa and was later christened Divina by Giovanni Boccaccio. Structure and story[edit] Detail of a manuscript in Milan's Biblioteca Trivulziana (MS 1080), written in 1337 by Francesco di ser Nardo da Barberino, showing the beginning of Dante's Comedy. The last word in each of the three parts of the Divine Comedy is stelle ("stars"). Inferno[edit]

Descartes Augustine of Hippo In the Catholic Church and the Anglican Communion, he is a saint, a pre-eminent Doctor of the Church, and the patron of the Augustinians. His memorial is celebrated on 28 August, the day of his death. He is the patron saint of brewers, printers, theologians, the alleviation of sore eyes, and a number of cities and dioceses.[11] Many Protestants, especially Calvinists, consider him to be one of the theological fathers of the Protestant Reformation due to his teachings on salvation and divine grace. In the East, many of his teachings are not accepted. Life[edit] Childhood and education[edit] At the age of 17, through the generosity of his fellow citizen Romanianus,[24] Augustine went to Carthage to continue his education in rhetoric. At about the age of 19, Augustine began an affair with a young woman in Carthage. Teaching rhetoric[edit] During the years 373 and 374, Augustine taught grammar at Thagaste. Augustine won the job and headed north to take up his position in late 384. Relics[edit]

Immanuel Kant Immanuel Kant (/kænt/;[1] German: [ɪˈmaːnu̯eːl kant]; 22 April 1724 – 12 February 1804) was a German philosopher who is widely considered to be a central figure of modern philosophy. He argued that fundamental concepts structure human experience, and that reason is the source of morality. His thought continues to have a major influence in contemporary thought, especially the fields of metaphysics, epistemology, ethics, political philosophy, and aesthetics.[2] Kant's major work, the Critique of Pure Reason (Kritik der reinen Vernunft, 1781),[3] aimed to explain the relationship between reason and human experience. With this project, he hoped to move beyond what he took to be failures of traditional philosophy and metaphysics. He attempted to put an end to what he considered an era of futile and speculative theories of human experience, while resisting the skepticism of thinkers such as David Hume. Kant argued that our experiences are structured by necessary features of our minds. [edit]

George III of the United Kingdom George III (George William Frederick; 4 June 1738[1] – 29 January 1820) was King of Great Britain and King of Ireland from 25 October 1760 until the union of these two countries on 1 January 1801, after which he was King of the United Kingdom of Great Britain and Ireland until his death. He was concurrently Duke and prince-elector of Brunswick-Lüneburg ("Hanover") in the Holy Roman Empire until his promotion to King of Hanover on 12 October 1814. He was the third British monarch of the House of Hanover, but unlike his two Hanoverian predecessors he was born in Britain, spoke English as his first language,[2] and never visited Hanover.[3] His life and reign, which were longer than any other British monarch before him, were marked by a series of military conflicts involving his kingdoms, much of the rest of Europe, and places farther afield in Africa, the Americas and Asia. In the later part of his life, George III suffered from recurrent, and eventually permanent, mental illness.

ST. JOHN OF AVILA AND ST. HILDEGARD OF BINGEN TO BE PROCLAIMED DOCTORS OF THE UNIVERSAL CHURCH Vatican City, 27 May 2012 (VIS) - After celebrating Mass this morning in the Vatican Basilica for the Solemnity of Pentecost, the Holy Father appeared at the window of his study to pray the Regina Coeli with pilgrims gathered in St. Peter's Square. Before the Marian prayer the Pope announced that on 7 October, at the start of the Ordinary Assembly of the Synod of Bishops, he will proclaim St. John of Avila and St. Hildegard of Bingen as Doctors of the Universal Church. The sanctity of their lives and the profundity of their doctrine mean that these two saints "retain all their importance. St. After praying the Regina Coeli he recalled that Mother Saint Louis (nee Marie-Louise Elisabeth de Lamoignon, widow of Mole de Champlatreux), foundress of the Sisters of Charity of St.