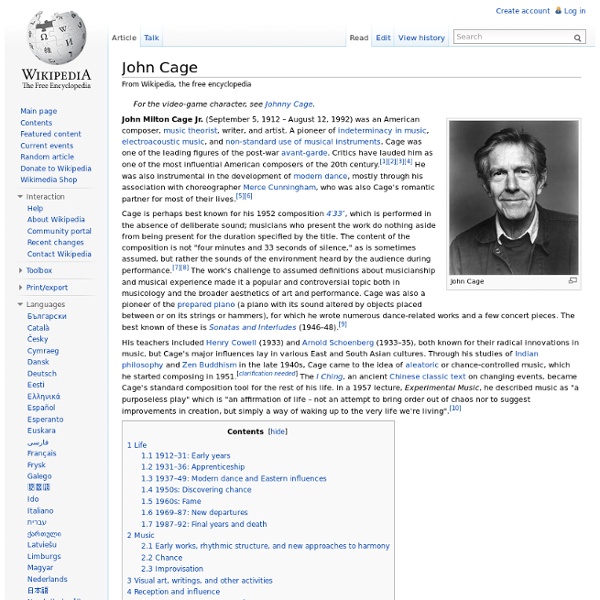 Not to be confused with John Cale. John Cage Cage is perhaps best known for his 1952 composition 4′33″, which is performed in the absence of deliberate sound; musicians who present the work do nothing aside from being present for the duration specified by the title. His teachers included Henry Cowell (1933) and Arnold Schoenberg (1933–35), both known for their radical innovations in music, but Cage's major influences lay in various East and South Asian cultures. Life[edit] 1912–31: Early years[edit] Cage's first experiences with music were from private piano teachers in the Greater Los Angeles area and several relatives, particularly his aunt Phoebe Harvey James who introduced him to the piano music of the 19th century. Cage enrolled at Pomona College in Claremont as a theology major in 1928. I was shocked at college to see one hundred of my classmates in the library all reading copies of the same book. 1931–36: Apprenticeship[edit] 1937–49: Modern dance and Eastern influences[edit]

John Cage meets Ant & Dec in the sitcom in my mind | Stewart Lee At the moment, I am trying to avoid thinking about John Cage. And instead, I find myself thinking about Ant & Dec. In 2009, the musicians Steve Beresford and Tania Chen asked me to supply the spoken part for a performance of Indeterminacy, by the postwar avant-garde giant John Cage. My shelves creak with music, but I didn't know any Cage, beyond Sonic Youth's interpretation of his piece Six on their Goodbye 20th Century album. Highbrow musicologists would scoff at this lowbrow lead in to Cage's oeuvre. Cage's Indeterminacy is currently available as a cardboard box of 90 cards of 90 stories of different lengths, and a leaflet of instructions: "Read the stories aloud, with or without accompaniment, paced so that each takes one minute. Indeterminacy's instructions advise reading "conversationally, naturally, and neutrally. None of this was remotely helpful. Indeterminacy is at London's Battersea Arts Centre on 23 September, Kings Place on 24 September and Café Oto on 25 September.