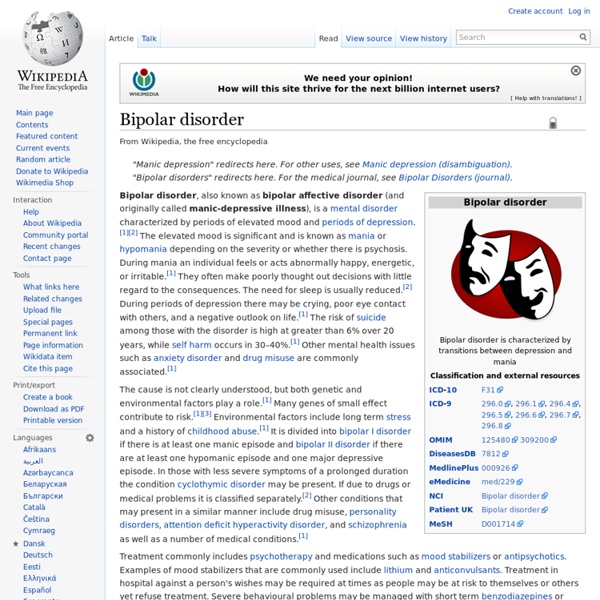 Bipolar disorder, also known as bipolar affective disorder (and originally called manic-depressive illness), is a mental disorder characterized by periods of elevated mood and periods of depression.[1][2] The elevated mood is significant and is known as mania or hypomania depending on the severity or whether there is psychosis. During mania an individual feels or acts abnormally happy, energetic, or irritable.[1] They often make poorly thought out decisions with little regard to the consequences. The need for sleep is usually reduced.[2] During periods of depression there may be crying, poor eye contact with others, and a negative outlook on life.[1] The risk of suicide among those with the disorder is high at greater than 6% over 20 years, while self harm occurs in 30–40%.[1] Other mental health issues such as anxiety disorder and drug misuse are commonly associated.[1] Signs and symptoms Manic episodes Hypomanic episodes Depressive episodes Mixed affective episodes Associated features

Emotional/Behavioral Disorders Definition Many terms are used to describe emotional, behavioral or mental disorders. Currently, students with such disorders are categorized as having an emotional disturbance, which is defined under the Individuals with Disabilities Education Act as follows: "...a condition exhibiting one or more of the following characteristics over a long period of time and to a marked degree that adversely affects a child's educational performance: An inability to learn that cannot be explained by intellectual, sensory, or health factors An inability to build or maintain satisfactory interpersonal relationships with peers and teachers Inappropriate types of behavior or feelings under normal circumstances A general pervasive mood of unhappiness or depression A tendency to develop physical symptoms or fears associated with personal or school factors. -[Code of Federal Regulations, Title 34, Section 300.7(c)(4)(i)] Academic characteristics References Meadow, P. Resources Burrello, L.C., & Wright, P.T.

Catatonia Catatonia is a state of neurogenic motor immobility, and behavioral abnormality manifested by stupor. It was first described, in 1874, by Karl Ludwig Kahlbaum in Die Katatonie oder das Spannungsirresein[1] (Catatonia or Tension Insanity). In the current Diagnostic and Statistical Manual of Mental Disorders published by the American Psychiatric Association (DSM-5) catatonia is not recognized as a separate disorder, but is associated with psychiatric conditions such as schizophrenia (catatonic type), bipolar disorder, post-traumatic stress disorder, depression and other mental disorders, as well as drug abuse or overdose (or both). It may also be seen in many medical disorders including infections (such as encephalitis), autoimmune disorders, focal neurologic lesions (including strokes), metabolic disturbances, alcohol withdrawal[2] and abrupt or overly rapid benzodiazepine withdrawal.[3][4][5] It can be an adverse reaction to prescribed medication. Clinical features[edit] Subtypes[edit]

Khan Academy Autism Spectrum Disorder What Is Autism Spectrum Disorder? Autism spectrum disorder (ASD) is characterized by: Persistent deficits in social communication and social interaction across multiple contexts;Restricted, repetitive patterns of behavior, interests, or activities;Symptoms must be present in the early developmental period (typically recognized in the first two years of life); and,Symptoms cause clinically significant impairment in social, occupational, or other important areas of current functioning. The term “spectrum” refers to the wide range of symptoms, skills, and levels of impairment or disability that children with ASD can have. Information on ASD can also be found on the Eunice Kennedy Shriver National Institute of Child Health and Human Development website and the Centers for Disease Control and Prevention website . Causes Scientists don't know the exact causes of autism spectrum disorder (ASD), but research suggests that both genes and environment play important roles. Genetic factors Diagnosis

Lexapro Lexapro (generic name escitalopram oxalate) is a selective serotonin reuptake inhibitor (SSRIs) sometimes prescribed for the treatment of depression associated with bipolar disorder (manic depression). Found here are resources and information relating to this medication. Lexapro Drug ProfileLexapro - generic escitalopram - is an antidepressant in the SSRI class that is approved to treat major depression and generalized anxiety disorder. Here is information about Lexapro including basic information, precautions and warnings, common side effects, and information about Lexapro and pregnancy. Lexapro / Escitalopram Side EffectsCatalogue of side effects for the medication Lexapro - generic Escitalopram - an SSRI antidepressant related to Celexa. Lexapro and Go Go GO! Half a Lexapro Is Better Than NoneAfter switching from Celexa to Lexapro I experienced mixed mania with severe agitation and back pain. Lexapro.comThe official home page for Lexapro from Forest Pharmaceuticals, Inc.

Delusional disorder Delusional disorder is an uncommon psychiatric condition in which patients present with delusions, but with no accompanying prominent hallucinations, thought disorder, mood disorder, or significant flattening of affect.[1][2] Delusions are a specific symptom of psychosis. Non-bizarre delusions are fixed false beliefs that involve situations that could potentially occur in real life; examples include being followed or poisoned.[3] Apart from their delusions, people with delusional disorder may continue to socialize and function in a normal manner and their behaviour does not generally seem odd or bizarre.[4] However, the preoccupation with delusional ideas can be disruptive to their overall lives.[4] For the diagnosis to be made, auditory and visual hallucinations cannot be prominent, though olfactory or tactile hallucinations related to the content of the delusion may be present.[5] Indicators of a delusion[edit] The following can indicate a delusion:[9] Features[edit] Types[edit]