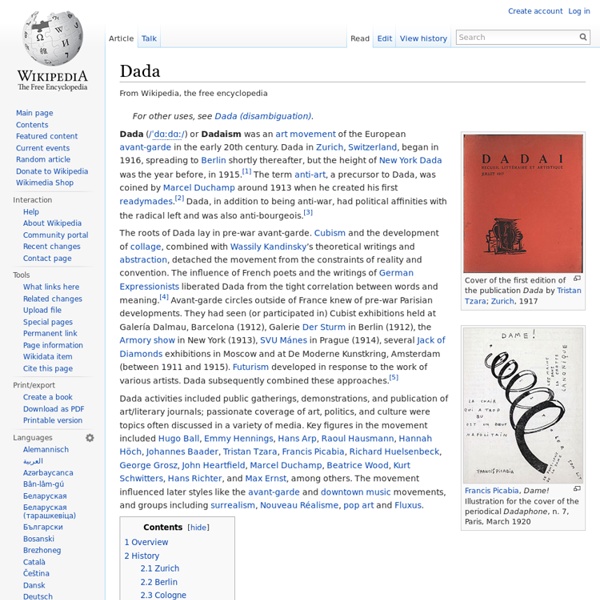 Dada (/ˈdɑːdɑː/) or Dadaism was an art movement of the European avant-garde in the early 20th century. Dada in Zurich, Switzerland, began in 1916, spreading to Berlin shortly thereafter, but the height of New York Dada was the year before, in 1915.[1] The term anti-art, a precursor to Dada, was coined by Marcel Duchamp around 1913 when he created his first readymades.[2] Dada, in addition to being anti-war, had political affinities with the radical left and was also anti-bourgeois.[3] Francis Picabia, Dame! Illustration for the cover of the periodical Dadaphone, n. 7, Paris, March 1920 Overview[edit] Francis Picabia, (left) Le saint des saints c'est de moi qu'il s'agit dans ce portrait, 1 July 1915; (center) Portrait d'une jeune fille americaine dans l'état de nudité, 5 July 1915: (right) J'ai vu et c'est de toi qu'il s'agit, De Zayas! Dada was an informal international movement, with participants in Europe and North America. To quote Dona Budd's The Language of Art Knowledge, Zurich[edit]

Postmodernism Philosophical and artistic movement Initially emerging from a mode of literary criticism, postmodernism developed in the mid-twentieth century as a rejection of modernism[8][9][10][11] and has been observed across many disciplines.[12][13] Postmodernism is associated with the disciplines deconstruction and post-structuralism.[4] Various authors have criticized postmodernism as promoting obscurantism, as abandoning Enlightenment rationalism and scientific rigor, and as adding nothing to analytical or empirical knowledge.[14][15][16][17][18][19] Definition[edit] Origins of term[edit] In 1942 H. R. In 1926, Bernard Iddings Bell, president of St. Author Peter Drucker suggested the transformation into a post-modern world that happened between 1937 and 1957 and described it as a "nameless era" characterized as a shift to a conceptual world based on pattern, purpose, and process rather than a mechanical cause. History[edit] Theories and derivatives[edit] Structuralism and post-structuralism[edit]

Expressionism Expressionism was a modernist movement, initially in poetry and painting, originating in Germany at the beginning of the 20th century. Its typical trait is to present the world solely from a subjective perspective, distorting it radically for emotional effect in order to evoke moods or ideas.[1][2] Expressionist artists sought to express meaning[3] or emotional experience rather than physical reality.[3][4] Origin of the term[edit] In 1905, a group of four German artists, led by Ernst Ludwig Kirchner, formed Die Brücke (the Bridge) in the city of Dresden. This was arguably the founding organization for the German Expressionist movement, though they did not use the word itself. A few years later, in 1911, a like-minded group of young artists formed Der Blaue Reiter (The Blue Rider) in Munich. "View of Toledo" by El Greco, 1595/1610 has been indicated to have a particularly striking resemblance to 20th-century expressionism. Expressionist-Visual artists[edit] In other arts[edit] Dance[edit]

Cultural movement A cultural movement is a change in the way a number of different disciplines approach their work. This embodies all art forms, the sciences, and philosophies. Historically, different nations or regions of the world have gone through their own independent sequence of movements in culture, but as world communications have accelerated this geographical distinction has become less distinct. When cultural movements go through revolutions from one to the next, genres tend to get attacked and mixed up, and often new genres are generated and old ones fade. These changes are often reactions against the prior cultural form, which typically has grown stale and repetitive. An obsession emerges among the mainstream with the new movement, and the old one falls into neglect - sometimes it dies out entirely, but often it chugs along favored in a few disciplines and occasionally making reappearances (sometimes prefixed with "neo-"). Cultural movements[edit] See: Romanesque architecture — Ottonian Art

Empire style 19th-century Neoclassical art movement The Empire style (French pronunciation: ​[ɑ̃.piːʁ], style Empire) is an early-nineteenth-century design movement in architecture, furniture, other decorative arts, and the visual arts, representing the second phase of Neoclassicism. It flourished between 1800 and 1815 during the Consulate and the First French Empire periods, although its life span lasted until the late-1820s. The Empire style originated in and takes its name from the rule of the Emperor Napoleon I in the First French Empire, when it was intended to idealize Napoleon's leadership and the French state. History[edit] Directoire style of the immediately preceding period, which aimed at a simpler, but still elegant evocation of the virtues of the Ancient Roman Republic: The stoic virtues of Republican Rome were upheld as standards not merely for the arts but also for political behaviour and private morality. The Empire style "turned to the florid opulence of Imperial Rome. Ornaments[edit]

Pablo Picasso Picasso, Henri Matisse and Marcel Duchamp are regarded as the three artists who most defined the revolutionary developments in the plastic arts in the opening decades of the 20th century, responsible for significant developments in painting, sculpture, printmaking and ceramics.[4][5][6][7] Picasso demonstrated extraordinary artistic talent in his early years, painting in a realistic manner through his childhood and adolescence. During the first decade of the 20th century, his style changed as he experimented with different theories, techniques, and ideas. His work is often categorised into periods. While the names of many of his later periods are debated, the most commonly accepted periods in his work are the Blue Period (1901–1904), the Rose Period (1904–1906), the African-influenced Period (1907–1909), Analytic Cubism (1909–1912), and Synthetic Cubism (1912–1919). Early life Pablo Picasso and his sister Lola, c.1889 Picasso showed a passion and a skill for drawing from an early age. Fame

Surrealism Surrealism is a cultural movement that began in the early 1920s, and is best known for its visual artworks and writings. The aim was to "resolve the previously contradictory conditions of dream and reality." Artists painted unnerving, illogical scenes with photographic precision, created strange creatures from everyday objects and developed painting techniques that allowed the unconscious to express itself and/or an idea/concept.[1] Surrealist works feature the element of surprise, unexpected juxtapositions and non sequitur; however, many Surrealist artists and writers regard their work as an expression of the philosophical movement first and foremost, with the works being an artifact. Leader André Breton was explicit in his assertion that Surrealism was, above all, a revolutionary movement. Surrealism developed out of the Dada activities during World War I and the most important center of the movement was Paris. Founding of the movement[edit] Surrealist Manifesto[edit] Expansion[edit]

Cubism Early-20th-century avant-garde art movement Cubism is an early-20th-century avant-garde art movement that revolutionized European painting and sculpture, and inspired related movements in music, literature and architecture. In Cubist artwork, objects are analyzed, broken up and reassembled in an abstracted form—instead of depicting objects from a single viewpoint, the artist depicts the subject from a multitude of viewpoints to represent the subject in a greater context.[1] Cubism has been considered the most influential art movement of the 20th century.[2][3] The term is broadly used in association with a wide variety of art produced in Paris (Montmartre and Montparnasse) or near Paris (Puteaux) during the 1910s and throughout the 1920s. History[edit] Pablo Picasso, 1909–10, Figure dans un Fauteuil (Seated Nude, Femme nue assise), oil on canvas, 92.1 × 73 cm, Tate Modern, London Proto-Cubism: 1907–08[edit] Cubism burgeoned between 1907 and 1911. Early Cubism: 1909–1914[edit] "M.