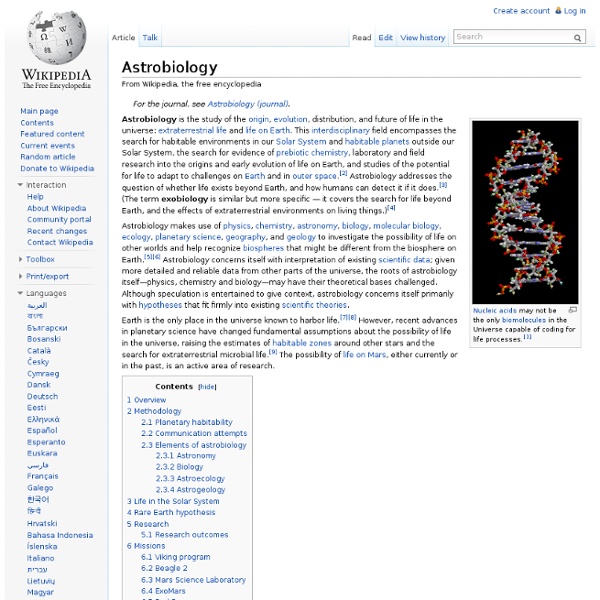 Astrobiology is the study of the origin, evolution, distribution, and future of life in the universe: extraterrestrial life and life on Earth. This interdisciplinary field encompasses the search for habitable environments in our Solar System and habitable planets outside our Solar System, the search for evidence of prebiotic chemistry, laboratory and field research into the origins and early evolution of life on Earth, and studies of the potential for life to adapt to challenges on Earth and in outer space.[2] Astrobiology addresses the question of whether life exists beyond Earth, and how humans can detect it if it does.[3] (The term exobiology is similar but more specific — it covers the search for life beyond Earth, and the effects of extraterrestrial environments on living things.)[4] Overview[edit] It is not known whether life elsewhere in the universe would utilize cell structures like those found on Earth. (Chloroplasts within plant cells shown here.)[19] Methodology[edit] Related:  wikipedia.org and pages • alien life

Astronautics Astronautics (alternatively cosmonautics), is the theory and practice of navigation beyond the Earth's atmosphere. In other words, it is the science and technology of spaceflight. The term astronautics was coined by analogy with aeronautics. As there is a certain degree of technology overlapping between the two fields, the term aerospace is often used to describe them both. History[edit] The early history of astronautics is theoretical: the fundamental mathematics of space travel was established by Isaac Newton in his 1687 treatise Philosophiae Naturalis Principia Mathematica.[2] Other mathematicians, such as Swiss Leonhard Euler and Italian Joseph Louis Lagrange also made essential contributions in the 18th and 19th centuries. ), combined mass of propellant and spacecraft ( ) and exhaust velocity of the propellant ( In fact this equation was derived earlier by William Moore, a British mathematician who worked at the Royal Military Academy at Woolwich. Subdisciplines[edit] See also[edit]

Paranormal This article is about unexplained phenomena. For phenomena not subject to laws of nature, see supernatural. For unexplained but presumed natural phenomena, see preternatural. Paranormal events are events that can not readily be explained by "the range of normal experience or scientific explanation A paranormal phenomenon is different from hypothetical concepts such as dark matter and dark energy. Scientific evidence does not support the existence of paranormal phenomena.[6] Etymology[edit] Paranormal subjects[edit] On the classification of paranormal subjects, Terence Hines in his book Pseudoscience and the Paranormal (2003) wrote: The paranormal can best be thought of as a subset of pseudoscience. The most notable paranormal beliefs include those that pertain to ghosts, extraterrestrial life, unidentified flying objects and cryptids.[11] One could argue though, that subjects such as the Drake equation, do operate on logical grounds while still being "paranormal" in nature. Cryptids[edit]

Astrochemistry Astrochemistry is the study of the abundance and reactions of chemical elements and molecules in the universe, and their interaction with radiation.[citation needed] The discipline is an overlap of astronomy and chemistry. The word "astrochemistry" may be applied to both the Solar System and the interstellar medium. The study of the abundance of elements and isotope ratios in Solar System objects, such as meteorites, is also called cosmochemistry, while the study of interstellar atoms and molecules and their interaction with radiation is sometimes called molecular astrophysics. The formation, atomic and chemical composition, evolution and fate of molecular gas clouds is of special interest, because it is from these clouds that solar systems form. Spectroscopy[edit] One particularly important experimental tool in astrochemistry is spectroscopy, the use of telescopes to measure the absorption and emission of light from molecules and atoms in various environments. Research[edit]

Life Life is a characteristic distinguishing physical entities having signaling and self-sustaining processes from those that do not,[1][2] either because such functions have ceased (death), or because they lack such functions and are classified as inanimate.[3][4][5] Biology is a science concerned with the study of life. Though life is confirmed only on the Earth, many think that extraterrestrial life is not only plausible, but probable or inevitable.[15][16] Other planets and moons in the Solar System have been examined for evidence of having once supported simple life, and projects such as SETI have attempted to detect radio transmissions from possible alien civilizations. According to the panspermia hypothesis, microscopic life exists throughout the Universe, and is distributed by meteoroids, asteroids and planetoids.[17] Early theories Materialism Herds of zebra and impala gathering on the Maasai Mara plain Hylomorphism Vitalism Vitalism is the belief that the life-principle is non-material.

Cosmochemistry Meteorites are often studied as part of cosmochemistry. Cosmochemistry or chemical cosmology is the study of the chemical composition of matter in the universe and the processes that led to those compositions.[1] This is done primarily through the study of the chemical composition of meteorites and other physical samples. Given that the asteroid parent bodies of meteorites were some of the first solid material to condense from the early solar nebula, cosmochemists are generally, but not exclusively, concerned with the objects contained within the solar system. History[edit] During the 1950s and 1960s, cosmochemistry became more accepted as a science. In October 2011, scientists reported that cosmic dust contains complex organic matter ("amorphous organic solids with a mixed aromatic-aliphatic structure") that could be created naturally, and rapidly, by stars.[5][6][7] Meteorites[edit] See also[edit] References[edit] External links[edit]

Red rain in Kerala For other uses, see Red rain. Rain water sample (left) and after the particles settled (right). Dried sediment (centre). The Kerala red rain phenomenon was a blood rain (red rain) event that occurred from 25 July to 23 September 2001, when heavy downpours of red-coloured rain fell sporadically on the southern Indian state of Kerala, staining clothes pink.[1] Yellow, green, and black rain was also reported.[2][3][4] Coloured rain was also reported in Kerala in 1896 and several times since,[5] most recently in June 2012.[6][7] Following a light microscopy examination, it was initially thought that the rains were coloured by fallout from a hypothetical meteor burst,[5] but a study commissioned by the Government of India concluded that the rains had been coloured by airborne spores from locally prolific terrestrial algae.[5] Occurrence[edit] The coloured rain of Kerala began falling on 25 July 2001, in the districts of Kottayam and Idukki in the southern part of the state. J. K.K.

Astronomy Astronomy is a natural science that is the study of celestial objects (such as moons, planets, stars, nebulae, and galaxies), the physics, chemistry, and evolution of such objects, and phenomena that originate outside the atmosphere of Earth, including supernovae explosions, gamma ray bursts, and cosmic background radiation. A related but distinct subject, cosmology, is concerned with studying the universe as a whole.[1] Astronomy is one of the oldest sciences. Prehistoric cultures have left astronomical artifacts such as the Egyptian monuments and Nubian monuments, and early civilizations such as the Babylonians, Greeks, Chinese, Indians, Iranians and Maya performed methodical observations of the night sky. During the 20th century, the field of professional astronomy split into observational and theoretical branches. Astronomy is one of the few sciences where amateurs can still play an active role, especially in the discovery and observation of transient phenomena. Etymology[edit]

Alien visitation Throughout history, some people have claimed experiences that are the supposed results of Alien Visitation. While some of the factors of extraterrestrial visits range in variety, the basic structure stays the same, motivating further research into the topic. Overview[edit] Alien Visitation refers to an intentional encounter between an extraterrestrial being to a human. For Alien Visitation to be considered a real issue among researchers, extraterrestrials must be proven to have a valid motivation for visiting, and the encounter must be scientifically possible and probable. As of now, theories have been put forth by various researchers regarding the validity of alien visitation. Motive[edit] The motive for extraterrestrial visitations can be classified into three subsections: 1) Attempt to influence the future of humanity 2) Attempt to warn or enlighten, and 3) Experimental use. Attempt to influence the future of humanity[edit] Attempts to warn or enlighten[edit] Experimental use[edit]

Progeny (film) Progeny is an American science fiction film[1] released in 1999. It was directed by Brian Yuzna and written by Aubrey Solomon and Stuart Gordon. The film stars Arnold Vosloo as Dr. Craig Burton, Jillian McWhirter as Sherry Burton, Brad Dourif as Dr. Bert Clavell and Lindsay Crouse as Dr. Susan Lamarche. Sherry (Jillian McWhirter), a professional woman, happily discovers she is pregnant. The couple contact a UFO/Paranormal college professor (Brad Dourif), who, through the use of hypnosis takes Sherry back to the night she conceived. They discover that she was abducted by aliens and artificially impregnated. Brian Yuzna nominated at the 1998 International Fantasy Film Award, Porto, Portugal. Jump up ^ The Staff and Friends of Scarecrow Video (2004).

Planetary science Planetary science (rarely planetology) is the scientific study of planets (including Earth), moons, and planetary systems, in particular those of the Solar System and the processes that form them. It studies objects ranging in size from micrometeoroids to gas giants, aiming to determine their composition, dynamics, formation, interrelations and history. It is a strongly interdisciplinary field, originally growing from astronomy and earth science,[1] but which now incorporates many disciplines, including planetary astronomy, planetary geology (together with geochemistry and geophysics), atmospheric science, oceanography, hydrology, theoretical planetary science, glaciology, and exoplanetology.[1] Allied disciplines include space physics, when concerned with the effects of the Sun on the bodies of the Solar System, and astrobiology. There are interrelated observational and theoretical branches of planetary science. History[edit] Disciplines[edit] Planetary astronomy[edit] Geomorphology[edit]