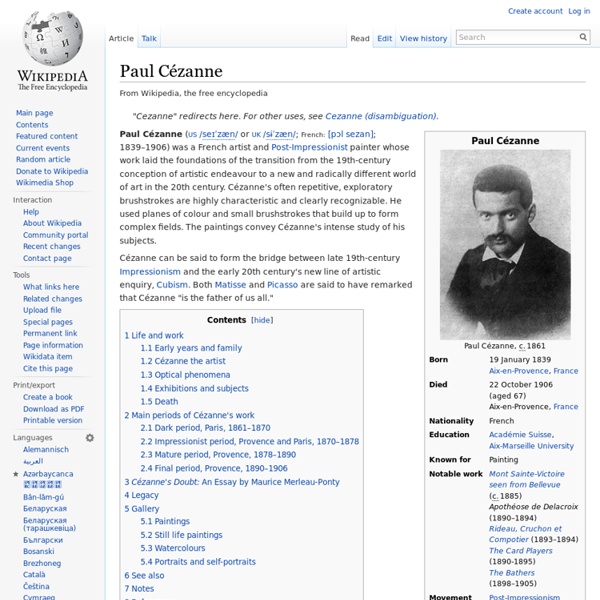 Paul Cézanne (US /seɪˈzæn/ or UK /sɨˈzæn/; French: [pɔl sezan]; 1839–1906) was a French artist and Post-Impressionist painter whose work laid the foundations of the transition from the 19th-century conception of artistic endeavour to a new and radically different world of art in the 20th century. Cézanne's often repetitive, exploratory brushstrokes are highly characteristic and clearly recognizable. He used planes of colour and small brushstrokes that build up to form complex fields. The paintings convey Cézanne's intense study of his subjects. Cézanne can be said to form the bridge between late 19th-century Impressionism and the early 20th century's new line of artistic enquiry, Cubism. Both Matisse and Picasso are said to have remarked that Cézanne "is the father of us all." §Life and work[edit] §Early years and family[edit] Femme au Chapeau Vert (Woman in a Green Hat. §Cézanne the artist[edit] In Paris, Cézanne met the Impressionist Camille Pissarro. §Optical phenomena[edit] §Death[edit]

Tristan Tzara After moving to Paris in 1919, Tzara, by then one of the "presidents of Dada", joined the staff of Littérature magazine, which marked the first step in the movement's evolution toward Surrealism. He was involved in the major polemics which led to Dada's split, defending his principles against André Breton and Francis Picabia, and, in Romania, against the eclectic modernism of Vinea and Janco. This personal vision on art defined his Dadaist plays The Gas Heart (1921) and Handkerchief of Clouds (1924). During the final part of his career, Tzara combined his humanist and anti-fascist perspective with a communist vision, joining the Republicans in the Spanish Civil War and the French Resistance during World War II, and serving a term in the National Assembly. Tristan Tzara was an influential author and performer, whose contribution is credited with having created a connection from Cubism and Futurism to the Beat Generation, Situationism and various currents in rock music. Name[edit] S.

Dada Dada (/ˈdɑːdɑː/) or Dadaism was an art movement of the European avant-garde in the early 20th century. Dada in Zurich, Switzerland, began in 1916, spreading to Berlin shortly thereafter, but the height of New York Dada was the year before, in 1915.[1] The term anti-art, a precursor to Dada, was coined by Marcel Duchamp around 1913 when he created his first readymades.[2] Dada, in addition to being anti-war, had political affinities with the radical left and was also anti-bourgeois.[3] Francis Picabia, Dame! Overview[edit] Francis Picabia, (left) Le saint des saints c'est de moi qu'il s'agit dans ce portrait, 1 July 1915; (center) Portrait d'une jeune fille americaine dans l'état de nudité, 5 July 1915: (right) J'ai vu et c'est de toi qu'il s'agit, De Zayas! Dada was an informal international movement, with participants in Europe and North America. Many Dadaists believed that the 'reason' and 'logic' of bourgeois capitalist society had led people into war. History[edit] Zurich[edit]

Color Matters welcomes you to the world of color: Symbolism, design, vision, science, marketing and more! Web Papers: Tristan Tzara - Dada Manifesto (23rd march 1918) The magic of a word - DADA - which for journalists has opened the door to an unforeseen world, has for us not the slightest importance. To launch a manifesto you have to want: A.B. & C., and fulminate against 1, 2, & 3, work yourself up and sharpen you wings to conquer and circulate lower and upper case As, Bs & Cs, sign, shout, swear, organise prose into a form that is absolutely and irrefutably obvious, prove its ne plus ultra and maintain that novelty resembles life in the same way as the latest apparition of a harlot proves the essence of God. I'm writing this manifesto to show that you can perform contrary actions at the same time, in one single, fresh breath; I am against action; as for continual contradiction, and affirmation too, I am neither for nor against them, and I won't explain myself because I hate common sense. Every spectator is a plotter, if he tries to explain a word (to know!) To be plain: The amusement of redbellies in the mills of empty skulls. If I shout:

Seven Rules for Managing Creative-But-Difficult People - Tomas Chamorro-Premuzic by Tomas Chamorro-Premuzic | 3:00 PM April 2, 2013 Moody, erratic, eccentric, and arrogant? Perhaps — but you can’t just get rid of them. In fact, unless you learn to get the best out of your creative employees, you will sooner or later end up filing for bankruptcy. Conversely, if you just hire and promote people who are friendly and easy to manage, your firm will be mediocre at best. Suppressed creativity is a malign organizational tumour. 1. 2. The solution, then, is to support your creatives with colleagues who are too conventional to challenge their ideas, but unconventional enough to collaborate with them. 3. As novelist John Irving said, “the reason I can work so hard at my writing is that it’s not work for me”. 4. 5. The moral of the story? 6. 7. A final caveat: even when you are able to manage your creative employees, it does not mean that you should let them manage others.

Web Papers: Francis Picabia - Dada Manifesto (March 1920 ) The Cubists want to cover Dada with snow; it may surprise you, but it is so, they want to empty the snow out of their pipe on to Dada. Are you sure? Perfectly, the facts speak for themselves from great grotesque mouths. They think that Dada wants to stop them in their hateful trade: selling pictures at a high price. Art is dearer than sausages, dearer than women, dearer than anything. Art is as easy to see as God (see Saint-Sulpice). Art is a pharmaceutical product for idiots. Tables turn, thanks to the spirits; pictures and other works of art are like strong- box-tables, the spirit is within them and gets more and more inspired as the prices rise in the salerooms. Comedy, comedy, comedy, comedy, comedy, dear friends. Dealers do not like painting, they know about the hidden spirit.... Buy reproductions of signed pictures. Don't be snobbish; having the same picture as your neighbour doesn't make you any less intelligent. There will be some, all the same, but not quite so many.

Francis Bacon (artist) Francis Bacon in his studio Francis Bacon (28 October 1909 – 28 April 1992) was an Irish-born British figurative painter known for his bold, graphic and emotionally raw imagery.[1] His painterly but abstracted figures typically appear isolated in glass or steel geometrical cages set against flat, nondescript backgrounds. Bacon began painting during his early 20s and worked only sporadically until his mid-30s. Unsure of his ability as a painter, he drifted and earned his living as an interior decorator and designer of furniture and rugs. Later, he admitted that his career was delayed because he had spent too long looking for a subject that would sustain his interest.[2] His breakthrough came with the 1944 triptych Three Studies for Figures at the Base of a Crucifixion which sealed his reputation as a uniquely bleak chronicler of the human condition. During his lifetime, Bacon was equally reviled and acclaimed. Bacon's birthplace at 63 Lower Baggot Street, Dublin

Art manifesto An art manifesto is a public declaration of the intentions, motives, or views of an artist or artistic movement. Manifestos are a standard feature of the various movements in the modernist avant-garde and are still written today. Art manifestos are mostly extreme in their rhetoric and intended for shock value to achieve a revolutionary effect. They often address wider issues, such as the political system. Manifestos typically consist of a number of statements, which are numbered or in bullet points and which do not necessarily follow logically from one to the next. Introduction[edit] Before the early 20th century, the manifesto was almost exclusively a declaration with political aims. The art manifesto has two main goals. Historically, there has been a strong parallel between the art manifesto and the political manifesto. Seminal 1909–45[edit] Futurist Manifesto 1909[edit] The Art of Noise 1913 Vorticist Manifesto 1914[edit] Dada Manifesto 1916[edit] De Stijl 1918[edit] Art Concret[edit] So...