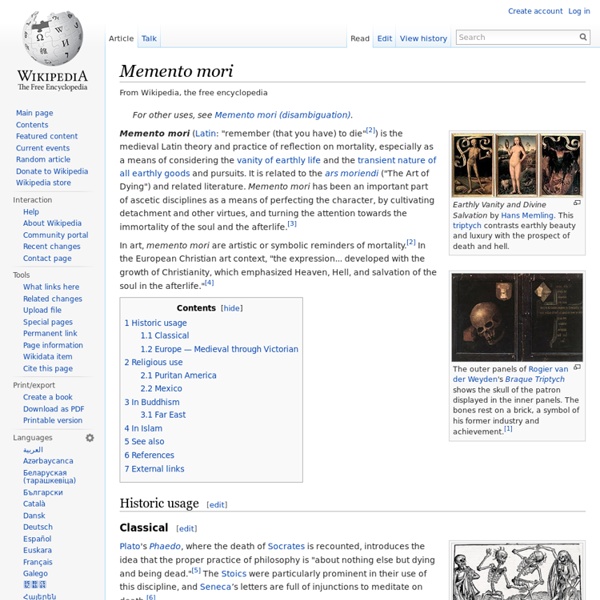 Earthly Vanity and Divine Salvation by Hans Memling. This triptych contrasts earthly beauty and luxury with the prospect of death and hell. The outer panels of Rogier van der Weyden's Braque Triptych shows the skull of the patron displayed in the inner panels. Memento mori (Latin: "remember (that you have) to die"[2]) is the medieval Latin theory and practice of reflection on mortality, especially as a means of considering the vanity of earthly life and the transient nature of all earthly goods and pursuits. In art, memento mori are artistic or symbolic reminders of mortality.[2] In the European Christian art context, "the expression... developed with the growth of Christianity, which emphasized Heaven, Hell, and salvation of the soul in the afterlife Historic usage[edit] Classical[edit] Plato's Phaedo, where the death of Socrates is recounted, introduces the idea that the proper practice of philosophy is "about nothing else but dying and being dead Europe — Medieval through Victorian[edit]

Artist Feature - Hans Memling Gotta love him. German then Flemish painter of the 15th century, he painted mostly religious and biblical scenes, like many of his peers. He was perhaps a tad bit more creepy though. From HansMemling.org: "Hans Memling (Memlinc) (c. 1430 - 11 August 1494) was an Early Netherlandish painter, born in Seligenstadt/Germany, who was the last major fifteenth century artist in the Low Countries, the successor to Jan van Eyck and Rogier van der Weyden, whose tradition he continued with little innovation.[citation needed] Born in Seligenstadt, near Frankfurt in the Middle Rhein region, it is believed that Memling served his apprenticeship at Mainz or Cologne, and later worked in the Netherlands under Rogier van der Weyden (c. 1455-1460). Triptych of the Last Judgment A common subject for painters of this era, which allowed many delightfully creepy Triptych of the Last Judgment - Detail (Right Panel) Triptych of the Earthly Vanity and Divine Salvation (Front) c. 1485 c. 1485 Man of Sorrows c. 1480-1490

Mottainai Mottainai (もったいない?, [mottainai]) is a Japanese term conveying a sense of regret concerning waste.[1] The expression "Mottainai!" can be uttered alone as an exclamation when something useful, such as food or time, is wasted, meaning roughly "what a waste!" or "Don't waste."[2] In addition to its primary sense of "wasteful", the word is also used to mean "impious; irreverent" or "more than one deserves".[3] Mottainai is an old Buddhist word, which has ties "with the Shinto idea that objects have souls Usage and translation[edit] Mottainai in Japanese refers to more than just physical waste (resources). As an exclamation ("mottainai!") History[edit] Origins[edit] In ancient Japanese, mottainai had various meanings, including a sense of gratitude mixed with shame for receiving greater favor from a superior than is properly merited by one's station in life.[1] One of the earliest appearances of the word mottainai is in the book Genpei Jōsuiki (A Record of the Genpei War, ca. 1247).[8]

Varanasi Varanasi (Hindustani pronunciation: [ʋaːˈraːɳəsi] ( )), also known as Benares,[4] Banaras (Banāras [bəˈnaːrəs] ( )) or Kashi (Kāśī [ˈkaːʃi] ( )), is an Indian city on the banks of the Ganges (Ganga) in Uttar Pradesh, 320 kilometres (200 mi) southeast of the state capital, Lucknow. It is the holiest of the seven sacred cities (Sapta Puri) in Hinduism and Jainism, and played an important role in the development of Buddhism. Some Hindus believe that death at Varanasi brings salvation. Many of its temples were plundered and destroyed by Mohammad Ghauri in the 12th century. The Kashi Naresh (Maharaja of Kashi) is the chief cultural patron of Varanasi, and an essential part of all religious celebrations. Varanasi is the spiritual capital of India. Etymology[edit] The name Vārāņasi[10] possibly originates from the names of the two rivers: Varuna, still flowing in Varanasi, and Asi, a small stream near Assi Ghat. History[edit] Garuḍa Purāṇa XVI 114[19] Varanasi, 1883. Geography and climate[edit]

Latin mottos - Generator of custom Latin phrases! Short Latin sayings have been traditionally used in heraldry as slogans and mottos (life mottos, family mottos, state mottos, senior class mottos etc.). Hence Semper fidelis, the Marine Corps motto, Carpe diem, a life motto for Casanova types and Memento mori, a stern reminder to all. If you desire to make your own Latin motto, but don't want to go back to school and take a Latin course, don't feel like learning Latin independently, and have no intention to employ professional translation services -- this set of scripts is designed to offer some help. Share 1. 2. 3. 4. 5. Although this Latin motto generator is primarily intended for educational purpuses, you are welcome to become inspired by some cool life mottos you create here. You will quickly recognize the patterns used in this generator - they are the same as in many popular mottos. Additional patterns will gradually become available, as I come up with ideas for additional patterns. // Looking for a "Lorem ipsum" generator?

art – Excommunicate.Net A museum with specimens of dragons and demons The most peculiar and amazing artistic specimens of the surreal captured in miniature form by artist Emoto Hajime. Glancing at these pages one will find the surreal and fantastic renderings of dragons, demons, and the just plain odd. Stanislav Szukalski March 31, 2007 – 11:02 am I wish I could say this man needed no introduction but his work has gone virtually unnoticed for several decades. Luke Rudolph Interview Luke is by far the youngest person we have ever interviewed. JackDirt: Why donât you start by telling us a little bit about your family, and area you are growing up in? LukeRudolph: I was born in Madison Wisconsin, and after a few years my family moved to Wausau. Kris Kuksi Interview We here at Excommunicate.Net are proud to present an extremely talented artist.

Wabi-sabi A Japanese tea house which reflects the wabi-sabi aesthetic in Kenroku-en (兼六園) Garden Wabi-sabi (侘寂?) represents a comprehensive Japanese world view or aesthetic centered on the acceptance of transience and imperfection. The aesthetic is sometimes described as one of beauty that is "imperfect, impermanent, and incomplete".[1] It is a concept derived from the Buddhist teaching of the three marks of existence (三法印, sanbōin?), specifically impermanence (無常, mujō?) Description[edit] "Wabi-sabi is the most conspicuous and characteristic feature of traditional Japanese beauty and it occupies roughly the same position in the Japanese pantheon of aesthetic values as do the Greek ideals of beauty and perfection in the West".[1] "If an object or expression can bring about, within us, a sense of serene melancholy and a spiritual longing, then that object could be said to be wabi-sabi The words wabi and sabi do not translate easily. Modern tea vessel made in the wabi-sabi style Western use[edit]

Isaac Luria The grave of Isaac Luria in Safed Isaac (ben Solomon) Luria Ashkenazi (1534[1] – July 25, 1572) (Hebrew:יִצְחָק בן שלמה לוּרְיָא אשכנזי Yitzhak Ben Sh'lomo Lurya Ashkenazi), commonly known as "Ha'ARI"[2] (meaning "The Lion"), "Ha'ARI Hakadosh" [the holy ARI] or "ARIZaL"[3] [the ARI, Of Blessed Memory (Zikhrono Livrakha)], was a foremost rabbi and Jewish mystic in the community of Safed in the Galilee region of Ottoman Palestine. He is considered the father of contemporary Kabbalah,[4] his teachings being referred to as Lurianic Kabbalah. While his direct literary contribution to the Kabbalistic school of Safed was extremely minute (he wrote only a few poems), his spiritual fame led to their veneration and the acceptance of his authority. The works of his disciples compiled his oral teachings into writing. Every custom of the Ari was scrutinized, and many were accepted, even against previous practice.[3] Luria died at Safed on July 25, 1572 (5 Av 5332). Early life[edit] Teachings[edit]

Disney Princesses As Tattooed Pinup Girls One would think that the “Disney Princesses Reimagined” collections have reached the end of their run, but artists like Tim Shumate continue to prove that there is still more to be done with the iconic characters in his Disney Princesses as Tattooed Pinup Girls. In his latest series, the talented artist digitally painted a handful of our favorite princesses from the world of Disney as tattooed pinup girls. They also happen to be done in a tattoo like format for those of you that want a little piece of Disney history permanently stamped on your body. The series includes the likes of Belle, Cinderella, Pocahontas, Tiana, Tinker Bell, and a few others.

Agoge The agōgē (Greek: ἀγωγή in Attic Greek, or ἀγωγά, agōgá in Doric Greek) was the rigorous education and training regimen mandated for all male Spartan citizens, except for the firstborn son in the ruling houses, Eurypontid and Agiad. The training involved learning stealth, cultivating loyalty to the Spartan group, military training (e.g. pain tolerance), hunting, dancing, singing and social (communicating) preparation.[1] The word "agoge" meant in ancient Greek, rearing, but in this context generally meant leading, guidance or training.[2] The agoge was prestigious throughout the Greek world, and many aristocratic families from other cities vied to send their sons to Sparta to participate in the agoge for varying periods of time. The Spartans were very selective in which young men they would permit to enroll. Structure[edit] When a boy was born, it was washed with wine in the belief that this would make it strong. The boys lived in groups (agélai, "herds") under an older man. References

Think Twice: How the Gut's "Second Brain" Influences Mood and Well-Being As Olympians go for the gold in Vancouver, even the steeliest are likely to experience that familiar feeling of "butterflies" in the stomach. Underlying this sensation is an often-overlooked network of neurons lining our guts that is so extensive some scientists have nicknamed it our "second brain". A deeper understanding of this mass of neural tissue, filled with important neurotransmitters, is revealing that it does much more than merely handle digestion or inflict the occasional nervous pang. The little brain in our innards, in connection with the big one in our skulls, partly determines our mental state and plays key roles in certain diseases throughout the body. Although its influence is far-reaching, the second brain is not the seat of any conscious thoughts or decision-making. This multitude of neurons in the enteric nervous system enables us to "feel" the inner world of our gut and its contents. The second brain informs our state of mind in other more obscure ways, as well.

Фото и рисунки, арт и креативная реклама Kabaddi Kabaddi Kabaddi is a wrestling sport originating from very early Indian civilization. The word Kabaddi is derived from a Tamil word Kai-pidi, literally meaning "(let's) Hold Hands", which is indeed the crucial aspect of play. It is the national game of Bangladesh, and the state game of Tamil Nadu, Punjab and Andhra Pradesh in India. In the international team version of kabaddi, two teams of seven members each occupy opposite halves of a field of 10 m × 13 m in case of men and 8 m × 12 m in case of women.[1] Each has three supplementary players held in reserve. The rules of the game are as follows. The raider is sent off the field if: the raider crosses a boundary line.a part of the raider's body touches the ground outside the boundary (except during a struggle with an opposing team member). Each time when a player is "out", the opposing team earns a point. Matches are categorised based on age and weight. Types of Kabaddi[edit] Sanjeevani[edit] Gaminee[edit] History and development[edit] Asia