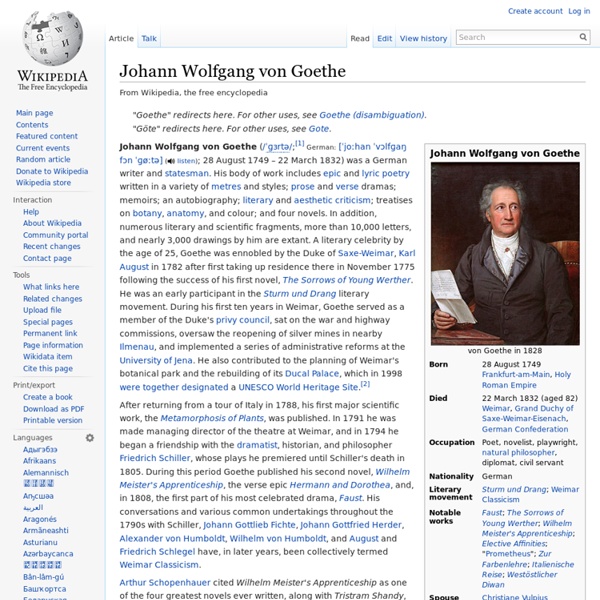 After returning from a tour of Italy in 1788, his first major scientific work, the Metamorphosis of Plants, was published. In 1791 he was made managing director of the theatre at Weimar, and in 1794 he began a friendship with the dramatist, historian, and philosopher Friedrich Schiller, whose plays he premiered until Schiller's death in 1805. During this period Goethe published his second novel, Wilhelm Meister's Apprenticeship, the verse epic Hermann and Dorothea, and, in 1808, the first part of his most celebrated drama, Faust. His conversations and various common undertakings throughout the 1790s with Schiller, Johann Gottlieb Fichte, Johann Gottfried Herder, Alexander von Humboldt, Wilhelm von Humboldt, and August and Friedrich Schlegel have, in later years, been collectively termed Weimar Classicism. Biography[edit] Early life[edit] Goethe's father, Johann Caspar Goethe, lived with his family in a large house in Frankfurt, then an Imperial Free City of the Holy Roman Empire. Goethe.

Der Erlkönig "Erlkönig" (also called "Der Erlkönig") is a poem by Johann Wolfgang von Goethe. It depicts the death of a child assailed by a supernatural being, the Erlking or "Erlkönig" (suggesting the literal translation "alder king", but see below). It was originally composed by Goethe as part of a 1782 Singspiel entitled Die Fischerin. The poem has been used as the text for Lieder (art songs for voice and piano) by many classical composers, with Franz Schubert's rendition, his Opus 1 (D. 328), being the best-known one.[1][2] Other notable settings are by members of Goethe's circle, including the actress Corona Schröter (1782), Andreas Romberg (1793), Johann Friedrich Reichardt (1794) and Carl Friedrich Zelter (1797). Beethoven attempted to set it to music but abandoned the effort; his sketch however was complete enough to be published in a completion by Reinhold Becker (1897). Summary[edit] An anxious young boy is being carried home at night by his father on horseback. Text[edit] The legend[edit]

Ruhollah Khomeini Not to be confused with Ali Khamenei Ruhollah Khomeini (Persian روح الله خمینی, Persian pronunciation: [ruːholˈlɑːhe χomeiˈniː], 24 September 1902 – 3 June 1989), known in the West as Ayatollah Khomeini,[6] was an Iranian religious leader and politician, and leader of the 1979 Iranian Revolution which saw the overthrow of Mohammad Reza Pahlavi, the Shah of Iran. Following the revolution, Khomeini became the country's Supreme Leader, a position created in the constitution as the highest ranking political and religious authority of the nation, which he held until his death. Khomeini was a marja ("source of emulation") in Twelver Shi'a Islam, author of more than forty books, but is primarily known for his political activities. He was named Man of the Year in 1979 by American newsmagazine TIME for his international influence,[11] and has been described as the "virtual face of Islam in Western popular culture"[12] where he remains a controversial figure. Early life[edit] Background[edit]

Grand Unified Theory A Grand Unified Theory (GUT) is a model in particle physics in which at high energy, the three gauge interactions of the Standard Model which define the electromagnetic, weak, and strong interactions, are merged into one single interaction characterized by one larger gauge symmetry and thus one unified coupling constant. During the grand unification epoch, the gauge force separated from the gravitational force. Models that do not unify all interactions using one simple Lie group as the gauge symmetry, but do so using semisimple groups, can exhibit similar properties and are sometimes referred to as Grand Unified Theories as well. Unifying gravity with the other three interactions would provide a theory of everything (TOE), rather than a GUT. Nevertheless, GUTs are often seen as an intermediate step towards a TOE. History[edit] Motivation[edit] Unification of matter particles[edit] Schematic representation of fermions and bosons in SU(5) GUT showing 5+10 split in the multiplets. SU(5)[edit] If

Parlour music Parlour music is a type of popular music which, as the name suggests, is intended to be performed in the parlours of middle-class homes by amateur singers and pianists. Disseminated as sheet music, its heyday came in the 19th century, as a result of a steady increase in the number of households with enough surplus cash to purchase musical instruments and instruction in music, and with the leisure time and cultural motivation to engage in recreational music-making. Its popularity waned in the 20th century as the phonograph record and radio replaced sheet music as the most common method of dissemination of popular music. This is the middlebrow and lowbrow music from which European classical music began to gradually and eventually self-consciously distance itself beginning around 1790. (1989, p.4, 17-18, 321) Front cover of "Just Awearyin' for You" (published 1901), a widely selling example of a parlor song. Mediant-octave mode examples[edit] Sources[edit] Hamm, Charles.

Famous INFJs - CelebrityTypes.com Carl Gustav Jung Psychiatrist, student of Freud, mentor of Von Franz, married to Emma Jung, dated Toni Wolff, Maria Moltzer and Sabina Spielrein Jung: "As far as we can discern, the sole purpose of human existence is to kindle a light in the darkness of mere being." Jung: "The creation of something new is not accomplished by the intellect but ... from inner necessity." Jung: "Women are far more 'psychological' than men, who are usually satisfied with logic alone." Sigmund Freud [in a personal letter to Jung:] "I have always felt that there is something about my personality ... that people find ... repelling, whereas all hearts open to you."

Stephen, King of England Stephen (c. 1092/6 – 25 October 1154), often referred to as Stephen of Blois (Old French: Estienne de Blois), was a grandson of William the Conqueror. He was King of England from 1135 to his death, and also the Count of Boulogne in right of his wife. Stephen's reign was marked by the Anarchy, a civil war with his cousin and rival, the Empress Matilda. He was succeeded by Matilda's son, Henry II, the first of the Angevin kings. Stephen was born in the County of Blois in middle France; his father, Count Stephen-Henry, died while Stephen was still young, and he was brought up by his mother, Adela. Stephen became increasingly concerned with ensuring that his son Eustace would inherit his throne after him. Early life (1096–1135)[edit] Childhood[edit] Northern France around the time of Stephen's birth Relationship with Henry I[edit] A contemporary depiction of Stephen's family tree, with his mother Adelin at the top, and, left to right, William, Theobald and Stephen Succession (1135)[edit]

Song cycle The term originated to describe cycles of art songs (often known by the German term "Lieder") in classical music, and has been extended to apply to popular music.[citation needed] Classical music[edit] The first generally accepted example of a song cycle is Beethoven's An die ferne Geliebte (Op. 98, 1816), along with the song cycle Die Temperamente beim Verluste der Geliebten (J. 200-3, \Op. 46, 1816) by Weber. The genre was firmly established by the cycles of Schubert: his Die schöne Müllerin (1823) and Winterreise (1827), based on poems by Wilhelm Müller, are among his most greatly admired works. Schumann's great cycles were all composed in 1840. Wolf made the composition of song collections by a single poet something of a speciality although only the shorter Italian Songbook and Spanish Songbook are performed at a single sitting, and Eisler's Hollywood Liederbuch also falls into the category of anthology. Popular music[edit] Musical theater[edit] Bibliography[edit] Ruth O. References[edit]

Simone Weil Simone Weil (French: [simɔn vɛj]; 3 February 1909 – 24 August 1943) was a French philosopher, Christian mystic, and political activist. Weil's life was marked by an exceptional compassion for the suffering of others; at the age of six, for instance, she refused to eat sugar after she heard that soldiers fighting in World War I had to go without. She died from tuberculosis during World War II, possibly exacerbated by malnutrition after refusing to eat more than the minimal rations that she believed were available to soldiers at the time. Taking a path that was unusual among twentieth-century left-leaning intellectuals, she became more religious and inclined towards mysticism as her life progressed. Biography[edit] Simone Weil at age 13. Early life[edit] Weil was born in her parents' apartment in Paris on 3 February 1909. Intellectual life[edit] Weil was a precocious student, proficient in Ancient Greek by age 12. Weil's most famous works were published posthumously. Political activism[edit]

Winterreise Franz Schubert by Wilhelm August Rieder. Oil painting, 1875, after a watercolor painting by Rieder of 1825. Winterreise (Winter Journey) is a song cycle for voice and piano by Franz Schubert (D. 911, published as Op. 89 in 1828), a setting of 24 poems by Wilhelm Müller. It is the second of Schubert's two great song cycles on Müller's poems, the earlier being Die schöne Müllerin (D. 795, Op. 25, 1823). Both were originally written for tenor voice but are frequently transposed to suit other vocal ranges - the precedent being established by Schubert himself. These two works have posed interpretative demands on listeners and performers due to their scale and structural coherence. Authorship and composition[edit] Wilhelm Müller Vogl, a literary and philosophical man accomplished in the classics and the English language, came to regard Schubert's songs as 'truly divine inspirations, the utterance of a musical clairvoyance.' Opinions of Schubert's intentions[edit] Nature of the work[edit] 1. 2.

INFJ Personal Growth People with the INFJ personality type are intense and perfectionistic. They have deep insights into many aspects of life, and usually have very high standards for their own understanding and accomplishments, as well as those of others. They are service-oriented and empathetic to other individuals. The INFJ strives for the ideal in every aspect of their life. As an INFJ, you have gifts that are specific to your personality type that aren't natural strengths for other types. Potential Problem Areas With any gift of strength, there is an associated weakness. INFJs are rare and intelligent people with many special gifts. Most of the weaker characteristics that are found in INFJs are due to their dominant function (Introverted iNtuition) overtaking their personality to the point that the other forces in their personality exist merely to serve the purposes of Introverted iNtuition. Explanation of Problems Solutions Living Happily in our World as an INFJ Specific suggestions: Feed Your Strengths!

King Stephen Dichterliebe Dichterliebe, 'The Poet's Love' (composed 1840), is the best-known song cycle of Robert Schumann (Op. 48). The texts for the 16 songs come from the Lyrisches Intermezzo of Heinrich Heine, composed 1822–1823, published as part of the poet's Das Buch der Lieder. Following the song-cycles of Franz Schubert (Die schöne Müllerin and Winterreise), those of Schumann constitute part of the central core of the genre in musical literature. The source: Heine's Lyrisches Intermezzo[edit] Heine's Lyrisches Intermezzo consists of a verse Prologue and 65 poems. The song-cycle[edit] Das Buch der Lieder was given its second edition, with preface from Paris, in 1837, the songs were composed in 1840, and the first edition of Dichterliebe was published in two volumes by Peters, in Leipzig, 1844. The very natural, almost hyper-sensitive poetical affections of the poems are mirrored in Schumann's settings, with their miniaturist chromaticism and suspensions. The songs or movements[edit] Recordings[edit]

Portrait of an INFJ As an INFJ, your primary mode of living is focused internally, where you take things in primarily via intuition. Your secondary mode is external, where you deal with things according to how you feel about them, or how they fit with your personal value system. INFJs are gentle, caring, complex and highly intuitive individuals. Artistic and creative, they live in a world of hidden meanings and possibilities. Only one percent of the population has an INFJ Personality Type, making it the most rare of all the types. INFJs place great importance on havings things orderly and systematic in their outer world. INFJs have uncanny insight into people and situations. But the INFJ is as genuinely warm as they are complex. Because the INFJ has such strong intuitive capabilities, they trust their own instincts above all else. INFJ is a natural nurturer; patient, devoted and protective. In the workplace, the INFJ usually shows up in areas where they can be creative and somewhat independent.