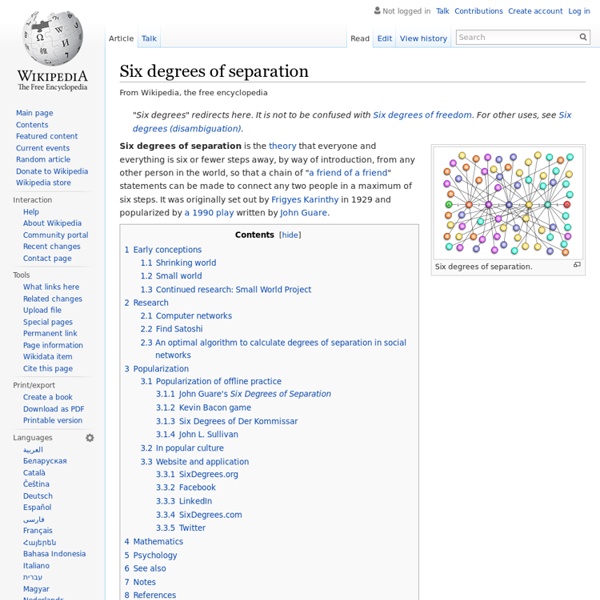 Six degrees of separation. Early conceptions[edit] Shrinking world[edit] Theories on optimal design of cities, city traffic flows, neighborhoods and demographics were in vogue after World War I. These[citation needed] conjectures were expanded in 1929 by Hungarian author Frigyes Karinthy, who published a volume of short stories titled Everything is Different. One of these pieces was titled "Chains," or "Chain-Links." As a result of this hypothesis, Karinthy's characters believed that any two individuals could be connected through at most five acquaintances. A fascinating game grew out of this discussion. This idea both directly and indirectly influenced a great deal of early thought on social networks. Small world[edit] Milgram continued Gurevich's experiments in acquaintanceship networks at Harvard University in Cambridge, Massachusetts, U.S. Milgram's article made famous[7] his 1967 set of experiments to investigate de Sola Pool and Kochen's "small world problem." Research[edit] John L.

Forty Portraits in Forty Years Text by SUSAN MINOT Nicholas Nixon was visiting his wife’s family when, “on a whim,” he said, he asked her and her three sisters if he could take their picture. It was summer 1975, and a black-and-white photograph of four young women — elbows casually attenuated, in summer shirts and pants, standing pale and luminous against a velvety background of trees and lawn — was the result. Predicting Reactions There are five different types of reactions possible in the reactions section in the AP Test: 1. Double Replacement Reactions (Metathesis) 2. Redox (Oxidation - Reduction) Reactions

A few things you shouldn't say to a childless woman Not all women can have babies or want to have babies. Photo: Kylie Pickett There are two words for the woman who reached over the table, grabbed my hand and in a consolatory tone announced, ''It's a tragedy you never got around to having children. Searching for the World's First Zero  Mathematicians consider the invention (or discovery, depending on your point of view) of zero as one of the most important intellectual advances humans have ever made. Why? Isn't zero just sheer nothingness? Nothing could be further from the truth. Egalitarianism 1. Preliminary Distinctions Egalitarianism is a contested concept in social and political thought. One might care about human equality in many ways, for many reasons. As currently used, the label “egalitarian” does not necessarily indicate that the doctrine so called holds that it is desirable that people's condition be made the same in any respect or that people ought to be treated the same in any respect. An egalitarian might rather be one who maintains that people ought to be treated as equals—as possessing equal fundamental worth and dignity and as equally morally considerable.

Zeno's paradoxes Zeno's arguments are perhaps the first examples of a method of proof called reductio ad absurdum also known as proof by contradiction. They are also credited as a source of the dialectic method used by Socrates.[3] Some mathematicians and historians, such as Carl Boyer, hold that Zeno's paradoxes are simply mathematical problems, for which modern calculus provides a mathematical solution.[4] Some philosophers, however, say that Zeno's paradoxes and their variations (see Thomson's lamp) remain relevant metaphysical problems.[5][6][7] The origins of the paradoxes are somewhat unclear. Egalitarianism Egalitarianism, within Christianity, is a movement based on the theological view that not only are all people equal before God in their personhood, but there are no gender-based limitations of what functions or roles each can fulfill in the home, the church, and the society. It is sometimes referred to as biblical equality. Egalitarians understand the Bible as teaching the fundamental equality of women and men of all racial and ethnic groups, all economic classes, and all age groups, based on the teachings and example of Jesus Christ.

Teachers - Math Data Analysis/Probability Source: NewsHour Extra Analyze the effects of unemployment nationwide and locally, and understand what it means to be unemployed and who makes up this population. Use current data and local unemployment rates to create graphs, publications and presentations. Egalitarianism Egalitarianism is a moral principle. It is the belief that all people should be equal. This does not amount to an ethical system, though. It has no standard of value. Teachers . Recommended Links . Math . Archive "A member of Ryerson Polytechnic Institute's Department of Engineering and Computing brings you this award-winning site about the history and operations of the abacus. The site compares devices from different countries, gives an overview of the abacus's history, teaches how to use an abacus, offers instructions on making an abacus out of Legos, and offers recommended reading and links. " Resource Type: Recommended Non-PBS Link

Negativity Can Ruin Relationships Read: What you lose when you gain a spouse But suppose you’ve managed to survive your courtship without any problems. (This may take more imagination.)