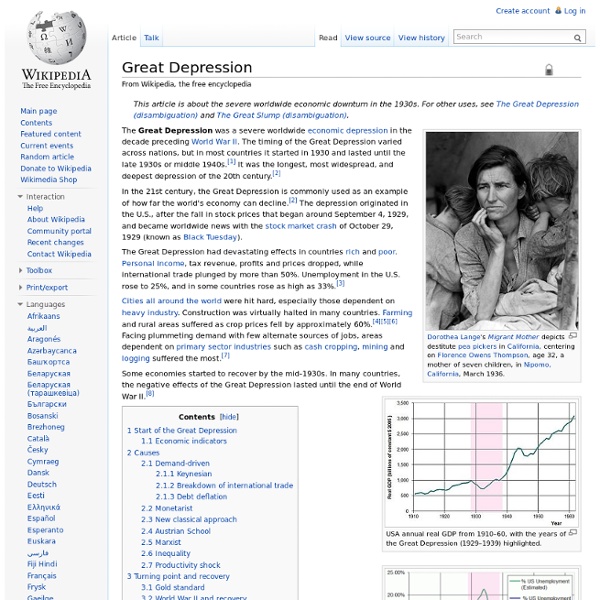 USA annual real GDP from 1910–60, with the years of the Great Depression (1929–1939) highlighted. The unemployment rate in the US 1910–1960, with the years of the Great Depression (1929–1939) highlighted. In the 21st century, the Great Depression is commonly used as an example of how far the world's economy can decline.[2] The depression originated in the U.S., after the fall in stock prices that began around September 4, 1929, and became worldwide news with the stock market crash of October 29, 1929 (known as Black Tuesday). The Great Depression had devastating effects in countries rich and poor. Cities all around the world were hit hard, especially those dependent on heavy industry. Some economies started to recover by the mid-1930s. Start Even after the Wall Street Crash of 1929, optimism persisted for some time; John D. Together, government and business spent more in the first half of 1930 than in the corresponding period of the previous year. Economic indicators Causes Keynesian Marxist Related:  Banking and finance issues

J. P. Morgan John Pierpont "J. P." Morgan (April 17, 1837 – March 31, 1913) was an American financier, banker, philanthropist and art collector who dominated corporate finance and industrial consolidation during his time. In 1892 Morgan arranged the merger of Edison General Electric and Thomson-Houston Electric Company to form General Electric. Morgan died in Rome, Italy, in his sleep in 1913 at the age of 75, leaving his fortune and business to his son, John Pierpont "Jack" Morgan, Jr., and bequeathing his mansion and large book collections to The Morgan Library & Museum in New York. At the height of Morgan's career during the early 1900s, he and his partners had financial investments in many large corporations and had significant influence over the nation's high finance. Childhood and education[edit] J. In the spring of 1852, illness that was to become more common as his life progressed struck; rheumatic fever left him in so much pain that he could not walk. Career[edit] Early years and life[edit]

Gold standard All references to "dollars" in this article refer to the United States dollar, unless otherwise stated. Under a gold standard, paper notes are convertible into preset, fixed quantities of gold. A gold standard is a monetary system in which the standard economic unit of account is based on a fixed quantity of gold. Three types may be distinguished: specie, exchange, and bullion. In the gold specie standard the monetary unit is associated with the value of circulating gold coins or the monetary unit has the value of a certain circulating gold coin, but other coins may be made of less valuable metal. The gold exchange standard usually does not involve the circulation of gold coins. As of 2013 no country used a gold standard as the basis of its monetary system, although some hold substantial gold reserves. A total of 174,100 tonnes of gold have been mined in human history, according to GFMS as of 2012. History Origin Silver United Kingdom United States International Japan Bimetallic standard

The Evolution Of Banking With the exception of the extremely wealthy, very few people buy their homes in all-cash transactions. Most of us need a mortgage, or some form of credit, to make such a large purchase. In fact, many people use credit in the form of credit cards to pay for everyday items. Tutorial: Introduction To Banking And Saving Divine DepositsBanks have been around since the first currencies were minted, perhaps even before that, in some form or another. Flipping a CoinThese coins, however, needed to be kept in a safe place. Coins could be hoarded more easily than other commodities, such as 300-pound pigs, so there emerged a class of wealthy merchants that took to lending these coins, with interest, to people in need. The First BankThe Romans, great builders and administrators in their own right, took banking out of the temples and formalized it within distinct buildings. Visa RoyalEventually, the various monarchs that reigned over Europe noted the strengths of banking institutions.

Exposing the Fed: What is the Federal Reserve? Part 3 Editor Note: For those of you who are not familiar with Marilyn MacGruder Barnewall, she is the woman who wrote the definitive book on Ambassador Lee Wanta, Wanta! Black Swan, White Hat. I listened to several interviews with Marilyn that were conducted by Teri Ambach and the team at Global News and Views on Facebook. Marilyn is fantastic and extremely knowledgable. If she has something to say, you’d be wise to listen and take note. (Marilyn MacGruder Barnewall, Global Financial Affairs Editor) Unfortunately, the same cannot be said about the Federal Reserve System. It is a privately held corporation owned by bankers… most of whose names are seen on Wall Street (though international banks now own larger and larger shares of the Federal Reserve System, placing control of America’s economy in the hands of non-American foreigners). Before talking about what the Federal Reserve System does, one other important fact needs to be mentioned: The Federal Reserve is an unlawful organization.

Secret Fed Loans Gave Banks Undisclosed $13B The Federal Reserve and the big banks fought for more than two years to keep details of the largest bailout in U.S. history a secret. Now, the rest of the world can see what it was missing. The Fed didn’t tell anyone which banks were in trouble so deep they required a combined $1.2 trillion on Dec. 5, 2008, their single neediest day. Saved by the bailout, bankers lobbied against government regulations, a job made easier by the Fed, which never disclosed the details of the rescue to lawmakers even as Congress doled out more money and debated new rules aimed at preventing the next collapse. A fresh narrative of the financial crisis of 2007 to 2009 emerges from 29,000 pages of Fed documents obtained under the Freedom of Information Act and central bank records of more than 21,000 transactions. ‘Change Their Votes’ The Fed, headed by Chairman Ben S. $7.77 Trillion The amount of money the central bank parceled out was surprising even to Gary H. ‘Motivate Others’ JPMorgan Chase & Co. Big Six

Chart Of The Day: Fed Interventions Since 2008 The chart below, via Stone McCarthy, shows the months with Fed intervention since December 2008. That in the past 42 or so months, less than one third have been intervention-free, should close any open questions about whether the stock "market" is anything but a policy vehicle used by the Fed to perpetuate a broke(n) status quo now entirely dependent on every market up (and down) tick. We dread to think what would happen to those record low US bond yields if the market were to be left on its own without the backstop of guaranteed Fed intervention in the interest rate market... ironically something which Barclays is in boiling hot water for right about now. And a detailed breakdown: