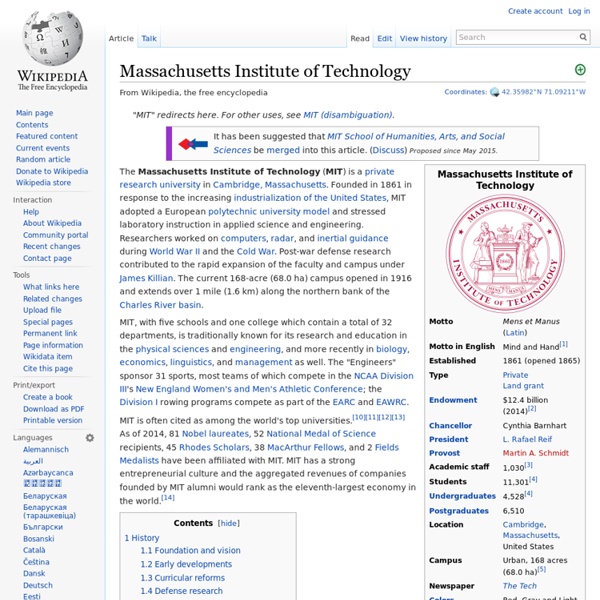 MIT is often cited as among the world's top universities.[10][11][12][13] As of 2014[update], 81 Nobel laureates, 52 National Medal of Science recipients, 45 Rhodes Scholars, 38 MacArthur Fellows, and 2 Fields Medalists have been affiliated with MIT. MIT has a strong entrepreneurial culture and the aggregated revenues of companies founded by MIT alumni would rank as the eleventh-largest economy in the world.[14] History[edit] Foundation and vision[edit] Rogers, a professor from the University of Virginia, wanted to establish an institution to address rapid scientific and technological advances.[19][20] He did not wish to found a professional school, but a combination with elements of both professional and liberal education,[21] proposing that: The Rogers Plan reflected the German research university model, emphasizing an independent faculty engaged in research, as well as instruction oriented around seminars and laboratories.[23][24] Early developments[edit] Curricular reforms[edit]

University of Oxford Coordinates: The University of Oxford (informally Oxford University or simply Oxford) is a collegiate research university located in Oxford, England. While Oxford has no known date of foundation, there is evidence of teaching as far back as 1096,[1] making it the oldest university in the English-speaking world, and the world's second-oldest surviving university.[1][6] It grew rapidly from 1167 when Henry II banned English students from attending the University of Paris.[1] After disputes between students and Oxford townsfolk in 1209, some academics fled northeast to Cambridge, where they established what became the University of Cambridge.[7] The two "ancient universities" are frequently jointly referred to as "Oxbridge". Oxford is the home of several notable scholarships, including the Clarendon Scholarship which was launched in 2001[10] and the Rhodes Scholarship which has brought graduate students to read at the university for more than a century.[11] History[edit] Founding[edit]

Georgia Institute of Technology The educational institution was founded in 1885 as the Georgia School of Technology as part of Reconstruction plans to build an industrial economy in the post-Civil War Southern United States. Initially, it offered only a degree in mechanical engineering. By 1901, its curriculum had expanded to include electrical, civil, and chemical engineering. Today, Georgia Tech is organized into six colleges and contains about 31 departments/units, with emphasis on science and technology. History[edit] Establishment[edit] Atlanta during the Civil War (c. 1864) The idea of a technology school in Georgia was introduced in 1865 during the Reconstruction period. In 1882, the Georgia State Legislature authorized a committee, led by Harris, to visit the Northeast to see firsthand how technology schools worked. Early years[edit] An early picture of Georgia Tech On October 20, 1905, U.S. Modern history[edit] In 1988, President John Patrick Crecine pushed through a restructuring of the university. Campuses[edit]

University of California, Los Angeles The University of California, Los Angeles (UCLA) is a public research university located in the Westwood neighborhood of Los Angeles, California, United States. Founded in 1919, it is the third-oldest campus of the University of California system.[citation needed] UCLA is one of the two flagship universities in the UC system (alongside UC Berkeley).[11][12][13][14] It offers 337 undergraduate and graduate degree programs in a wide range of disciplines.[15] With an approximate enrollment of 29,000 undergraduate and 13,000 graduate students, UCLA is the university with the largest enrollment in the state of California[16] and the most applied to university in the world with over 105,000 applications for Fall 2014.[17] The university has been labeled one of the Public Ivies, a publicly funded university considered as providing a quality of education comparable to those of the Ivy League. UCLA student-athletes compete intercollegiately as the Bruins in the Pacific-12 Conference.

California Institute of Technology The California Institute of Technology (or Caltech)[5] is a private research university located in Pasadena, California, United States. Caltech has six academic divisions with strong emphasis on science and engineering. Its 124-acre (50 ha) primary campus is located approximately 11 mi (18 km) northeast of downtown Los Angeles. Despite its small size, 32 Caltech alumni and faculty have won a total of 33 Nobel Prizes (Linus Pauling being the only individual in history to win two unshared prizes) and 70 have won the United States National Medal of Science or Technology.[3] There are 112 faculty members who have been elected to the National Academies. Caltech announced its ninth president, Thomas F. History[edit] Throop College[edit] Throop Polytechnic Institute, Pasadena, Calif, 1908, on its original campus at downtown Pasadena. Caltech started as a vocational school founded in Pasadena in 1891 by local businessman and politician Amos G. World Wars[edit] Throop Hall, 1912 Post-war growth[edit]

Tufts University Tufts College was founded in 1852 by Christian Universalists who worked for years to open a non-sectarian institution of higher learning.[6] Charles Tufts donated the land for the campus on Walnut Hill, the highest point in Medford, saying that he wanted to set a "light on the hill." The name was changed to Tufts University in 1954, although the corporate name remains "the Trustees of Tufts College." For more than a century, Tufts was a small New England liberal arts college. The French-American nutritionist Jean Mayer became president of Tufts in the late 1970s and, through a series of rapid acquisitions, transformed the school into an internationally renowned research university.[7] It is known as both a Little Ivy and a New Ivy and consistently ranks among the nation's top schools. History[edit] 19th century[edit] Tufts College, c. 1854 P. 20th century[edit] Walnut Hill as it appeared prior to the construction of Tisch Library and steps, circa 1910. 21st century[edit] Campuses[edit]

Columbia University The university was founded in 1754 as King's College by royal charter of George II of Great Britain. After the American Revolutionary War, King's College briefly became a state entity, and was renamed Columbia College in 1784. The University now operates under a 1787 charter that places the institution under a private board of trustees, and in 1896 it was further renamed Columbia University.[7] That same year, the university's campus was moved from Madison Avenue to its current location in Morningside Heights, where it occupies more than six city blocks, or 32 acres (13 ha).[8] The university encompasses twenty schools and is affiliated with numerous institutions, including Teachers College (which is an academic department of the university though legally separate from the university), Barnard College, and the Union Theological Seminary, with joint undergraduate programs available through the Jewish Theological Seminary of America as well as the Juilliard School.[9] History[edit]