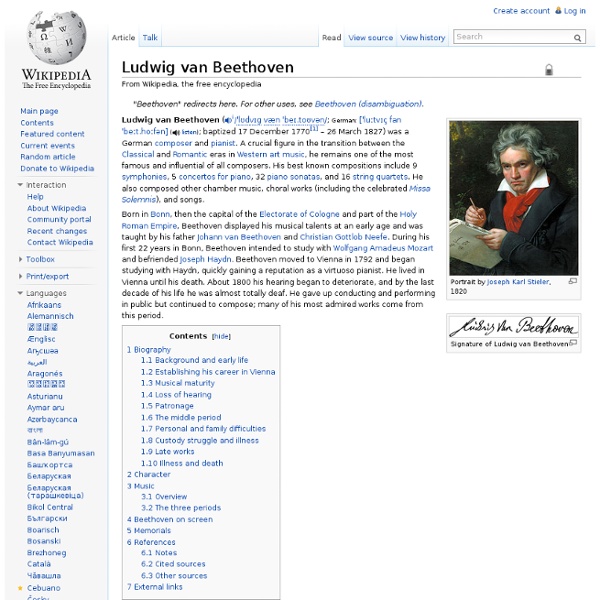 Ludwig van Beethoven ( i/ˈlʊdvɪɡ væn ˈbeɪ.toʊvən/; German: [ˈluːtvɪç fan ˈbeːt.hoːfən] ( Born in Bonn, then the capital of the Electorate of Cologne and part of the Holy Roman Empire, Beethoven displayed his musical talents at an early age and was taught by his father Johann van Beethoven and Christian Gottlob Neefe. During his first 22 years in Bonn, Beethoven intended to study with Wolfgang Amadeus Mozart and befriended Joseph Haydn. Beethoven moved to Vienna in 1792 and began studying with Haydn, quickly gaining a reputation as a virtuoso pianist. Biography Background and early life Prince-Elector's Palace (Kurfürstliches Schloss) in Bonn, where the Beethoven family had been active since the 1730s Beethoven was born of this marriage in Bonn. Beethoven's first music teacher was his father. A portrait of the 13-year-old Beethoven by an unknown Bonn master (c. 1783) Beethoven was introduced to several people who became important in his life in these years. Establishing his career in Vienna

Franz Schubert 1875 oil painting by Wilhelm August Rieder, after his own 1825 watercolor portrait Franz Peter Schubert (German pronunciation: [ˈfʁant͡s ˈʃuːbɐt]; 31 January 1797 – 19 November 1828) was an Austrian composer. In a short lifespan of less than 32 years, Schubert was a prolific composer, writing some 600 Lieder, ten complete or nearly complete symphonies, liturgical music, operas, incidental music and a large body of chamber and solo piano music. Biography[edit] Early life and education[edit] Schubert was born in Himmelpfortgrund (now a part of Alsergrund), Vienna, on 31 January 1797. The house in which Schubert was born, today Nussdorfer Strasse 54, in the ninth district of Vienna. At the age of six, Franz began to receive regular instruction from his father and a year later was enrolled at his father's school. Teacher at his father's school[edit] At the end of 1813, he left the Stadtkonvikt and returned home for teacher training at the Normalhauptschule. Supported by friends[edit]

Beethoven Ah, yes...then as now people wanted to be able to see their idols. And what they apparently wanted to see, more than anything else, were the ideals he seemed to represent. Not a mere man. A mere man is how the astonished music critic Ludwig Rellstab described him upon meeting him in 1825. Though surprised that Beethoven appeared to him so ordinary, he had to ask himself "why should Beethoven's features look like his scores?" Beethoven was born only six years before the American Revolution and nineteen years before the French. Beethoven moved easily in aristocratic circles and was often patronized by its members. If Beethoven's uncompromising behavior was what most drew the attention of the Viennese, it would be no surprise if the Beethoven they saw in pictures began somehow to resemble a defiant revolutionary. The nose, apparently, was revised as well, being a bit larger than is commonly represented. michael@pianonoise.com

Wolfgang Amadeus Mozart He composed over 600 works, many acknowledged as pinnacles of symphonic, concertante, chamber, operatic, and choral music. He is among the most enduringly popular of classical composers, and his influence on subsequent Western art music is profound; Beethoven composed his own early works in the shadow of Mozart, and Joseph Haydn wrote that "posterity will not see such a talent again in 100 years."[3] Early life Family and childhood Anonymous portrait of the child Mozart, possibly by Pietro Antonio Lorenzoni; painted in 1763 on commission from Leopold Mozart Wolfgang Amadeus Mozart was born on 27 January 1756 to Leopold Mozart (1719–1787) and Anna Maria, née Pertl (1720–1778), at 9 Getreidegasse in Salzburg. Leopold Mozart, a native of Augsburg,[7] was a minor composer and an experienced teacher. When Nannerl was seven, she began keyboard lessons with her father while her three-year-old brother looked on. These early pieces, K. 1–5, were recorded in the Nannerl Notenbuch. 1762–73: Travel

Michael Haydn Michael Haydn Johann Michael Haydn (German: [ˈhaɪdən] ( Life[edit] Michael Haydn was born in 1737 in the Austrian village of Rohrau, near the Hungarian border. Michael's early professional career path was paved by his older brother Joseph, whose skillful singing had landed him a position as a boy soprano in the St. "Reutter was so captivated by [Joseph]'s talents that he declared to his father that even if he had twelve sons he would take care of them all. The same source indicates that Michael was a brighter student than Joseph, and that (particularly when Joseph had grown enough to have trouble keeping his soprano voice) it was Michael's singing that was the more admired. Shortly after he left the choir school, Michael was appointed Kapellmeister at Nagyvárad (Großwardein, Oradea) and later, in 1762, at Salzburg, where he remained for 43 years, during which he wrote over 360 compositions comprising both church and instrumental music. Leopold Mozart criticized Haydn's heavy drinking.[4]

Ludwig van Beethoven Ludwig van Beethoven (baptized December 17 1770, died March 26 1827) was a German composer who lived predominantly in Vienna, Austria. He was a major musical figure in the transitional period between the Classical and Romantic eras. Beethoven is widely regarded as one of history's greatest composers. Sourced[edit] I want to seize fate by the throat. About Beethoven[edit] Another equally true saying of Schumann is that, compared with Beethoven, Schubert is as a woman to a man. Attributed[edit] Whoever tells a lie is not pure of heart, and such a person can not cook a clean soup." External links[edit] Wikisource has original works written by or about:

Joseph Haydn Franz Joseph Haydn[n 1] (/ˈdʒoʊzəf ˈhaɪdən/; German: [ˈjoːzɛf ˈhaɪdən] ( ); 31 March[1] 1732 – 31 May 1809), known as Joseph Haydn,[n 1] was one of the most prominent and prolific composers of the Classical period. He was instrumental in the development of chamber music such as the piano trio[2] and his contributions to musical form have earned him the epithets "Father of the Symphony" and "Father of the String Quartet".[3] A lifelong resident of Austria,[4] Haydn spent much of his career as a court musician for the wealthy Esterházy family at their remote estate. Joseph Haydn was the brother of Michael Haydn – himself a highly regarded composer – and Johann Evangelist Haydn, a tenor. Biography[edit] Early life[edit] Joseph Haydn was born in Rohrau, Austria, a village that at that time stood on the border with Hungary. Haydn's parents had noticed that their son was musically gifted and knew that in Rohrau he would have no chance to obtain serious musical training. The London journeys[edit]

Classical period (music) The dates of the Classical period in Western music are generally accepted as being between about 1730 and 1820. However, the term classical music is used in a colloquial sense to describe a variety of Western musical styles from the ninth century to the present, and especially from the sixteenth or seventeenth to the nineteenth. This article is about the specific period from 1750 to 1820.[1] The Classical period falls between the Baroque and the Romantic periods. The best-known composers from this period are Joseph Haydn, Wolfgang Amadeus Mozart, Ludwig van Beethoven, and Franz Schubert; other notable names include Luigi Boccherini, Muzio Clementi, Antonio Soler, Antonio Salieri, François Joseph Gossec, Johann Stamitz, Carl Friedrich Abel, Carl Philipp Emanuel Bach, and Christoph Willibald Gluck. Ludwig van Beethoven is also regarded either as a Romantic composer or a composer who was part of the transition to the Romantic. A string quartet.