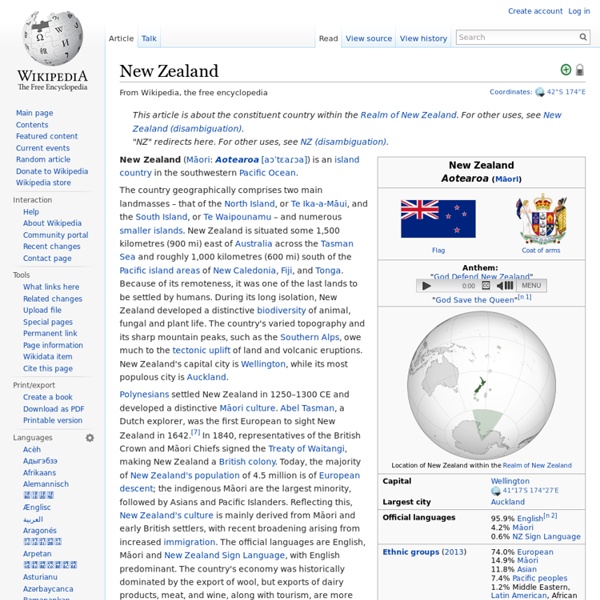 New Zealand (Māori: Aotearoa [aɔˈtɛaɾɔa]) is an island country in the southwestern Pacific Ocean. The country geographically comprises two main landmasses – that of the North Island, or Te Ika-a-Māui, and the South Island, or Te Waipounamu – and numerous smaller islands. New Zealand is situated some 1,500 kilometres (900 mi) east of Australia across the Tasman Sea and roughly 1,000 kilometres (600 mi) south of the Pacific island areas of New Caledonia, Fiji, and Tonga. Because of its remoteness, it was one of the last lands to be settled by humans. Polynesians settled New Zealand in 1250–1300 CE and developed a distinctive Māori culture. Nationally, legislative authority is vested in an elected, unicameral Parliament, while executive political power is exercised by the Cabinet, led by the Prime Minister, who is currently John Key. Etymology Detail from a 1657 map showing the western coastline of "Nova Zeelandia" History Politics Government Foreign relations and the military Environment Climate Related:  Societal evolution

Tokyo Tokyo (東京, Tōkyō?, "Eastern Capital") (Japanese: [toːkʲoː], English /ˈtoʊki.oʊ/, listen ), officially Tokyo Metropolis (東京都, Tōkyō-to?) Tokyo is often referred to and thought of as a city, but is officially known as a "metropolitan prefecture", which differs from a city. The Michelin Guide has awarded Tokyo by far the most Michelin stars of any city in the world.[15][16] Etymology[edit] Tokyo was originally known as Edo, which means "estuary".[17] Its name was changed to Tokyo (Tōkyō: tō "east" and kyō "capital") when it became the imperial capital in 1868,[18] in line with the East Asian tradition of including the word capital ('京') in the name of the capital city.[17] During the early Meiji period, the city was also called "Tōkei", an alternative pronunciation for the same Chinese characters representing "Tokyo". The Edo-to-Tokyo renaming was first suggested in 1813 in the book Kondō Hisaku (ja) (Secret Plan of Commingling), written by Satō Nobuhiro. History[edit] 1869–1943[edit]

Árbol del Tule Full width of trunk Dimensions and age[edit] In 2005, its trunk had a circumference of 42.0 m (137.8 ft), equating to a diameter of 14.05 m (46.1 ft),[2] a slight increase from a measurement of 11.42 m (37.5 ft) m in 1982.[3] However, the trunk is heavily buttressed, giving a higher diameter reading than the true cross-sectional of the trunk represents; when this is taken into account, the diameter of the 'smoothed out' trunk is 9.38 m (30.8 ft).[2] This is still slightly larger than the next most stout tree known, a Giant Sequoia with a 8.98 m (29.5 ft) diameter.[4] It is so large that it was originally thought to be multiple trees, but DNA tests have proven that it is only one tree.[5] This does not rule out another hypothesis, which states that it comprises multiple trunks from a single individual.[6] The tree is occasionally nicknamed the "Tree of Life" from the images of animals that are reputedly visible in the tree's gnarled trunk. Slowly dying[edit] References[edit] Coordinates:

James Cook - New Zealand in History That afternoon Cook and would have attempted a further landing, but heavy surf made this impossible. On noticing the appearance of two canoes Cook planned to intercept them by surprise, with the idea of taking the occupants prisoner, offering them gifts, gaining their trust and then setting them free. However, the canoe occupants noticed the arrival of one of the Endeavour's small boats, and attacked as it approached. The Europeans, firing in self defence, killed or wounded three or four Māori. Cook however, upset by the killings which had already taken place, decided to leave this area. The Endeavour continued to coast Te Matau-a-Maaui (Maaui's fish hook, or modern Hawkes Bay), on the east coast of the North Island. On 15th October, as the Endeavour was off the coast, a large canoe came alongside. Because of this event, Cook named the area Kidnapper's Bay. From here the Endeavour continued to Cape Turnagain, turning to coast the East Cape and the Bay of Plenty.

Vatican City Vatican City i/ˈvætɨkən ˈsɪti/, officially Vatican City State (Italian: Stato della Città del Vaticano;[note 4] pronounced [ˈstaːto della t͡ʃitˈta (d)del vatiˈkaːno]), is a landlocked sovereign city-state whose territory consists of a walled enclave within the city of Rome, Italy. It has an area of approximately 44 hectares (110 acres), and a population of around 840.[1] This makes Vatican City the smallest internationally recognized independent state in the world by both area and population. Vatican City is an ecclesiastical[1] or sacerdotal-monarchical[2] state, ruled by the Bishop of Rome—the Pope. In the city, there are cultural sites such as St. Vatican City State is distinct from the Holy See,[note 5] which dates back to early Christianity and is the main episcopal see of 1.2 billion Latin and Eastern Catholic adherents around the globe. Geography[edit] Map of Vatican City, highlighting notable buildings and the Vatican gardens The territory includes St. St. Climate[edit]

Madrid Madrid (English /məˈdrɪd/, Spanish: [maˈðɾið]) is the capital of Spain and its largest city. The population of the city is roughly 3.3 million[4] and the entire population of the Madrid metropolitan area is calculated to be around 6.5 million. It is the third-largest city in the European Union, after London and Berlin, and its metropolitan area is the third-largest in the European Union after London and Paris.[5][6][7][8] The city spans a total of 604.3 km2 (233.3 sq mi).[9] Madrid houses the headquarters of the World Tourism Organization (WTO), belonging to the United Nations Organization (UN), the SEGIB, the Organization of Ibero-American States (OEI), and the Public Interest Oversight Board (PIOB). While Madrid possesses a modern infrastructure, it has preserved the look and feel of many of its historic neighbourhoods and streets. History[edit] Toponym[edit] There are several theories regarding the origin of the name "Madrid". Middle Ages[edit] Modern Age[edit]

Santa María del Tule The town’s claim to fame is as the home of a 2,000 year old Montezuma cypress tree, known as the El Árbol del Tule, which is one of the oldest, largest and widest trees in the world. Its gnarled trunk and branches are filled with shapes that have been given names such as “the elephant,” “the pineapple” and even one called “Carlos Salinas’ ears.”[2][3][4] History[edit] The municipality of Santa María del Tule used to be a lake surrounded by marshes which included cypress trees.[2][3] This marsh was also filled with bulrushes which accounts for part of the town’s name.[3] The population of Tule had made their living since pre-Hispanic times extracting and processing lime (calcium oxide) for sale in the city of Oaxaca. Over the centuries, the area has dried with the lake and marshes gone.[2] More recently, increased urbanization and irrigated farming has put pressure on aquifers here. The town[edit] The Tule Tree[edit] Main article: Árbol del Tule The municipality[edit] References[edit]

f43066367717932 Rome Rome (/ˈroʊm/; Italian: Roma pronounced [ˈroːma] ( ); Latin: Rōma) is a city and special comune (named "Roma Capitale") in Italy. Rome is the capital of Italy and also of the Province of Rome and of the region of Lazio. With 2.7 million residents in 1,285.3 km2 (496.3 sq mi), it is also the country's largest and most populated comune and fourth-most populous city in the European Union by population within city limits. The urban area of Rome extends beyond the administrative city limits with a population of around 3.8 million.[2] Between 3.2 and 4.2 million people live in Rome metropolitan area.[3][4][5][6][7] The city is located in the central-western portion of the Italian Peninsula, on the Tiber within Lazio (Latium). Etymology About the origin of the name Roma several hypotheses have been advanced.[15] The most important are the following: History Earliest history Legend of the Founding of Rome Monarchy, republic, empire Map depicting late ancient Rome. Middle Ages Early modern

Louvre Edward James Edward William Frank James (1907–1984) was a British poet known for his patronage of the surrealist art movement. Early life and marriage[edit] Edward James had four older sisters: Audrey, Millicent, Xandra, and Silvia. St Andrew's West Dean, West Sussex, UK James divorced Losch in 1934, accusing her of adultery with Prince Serge Obolensky, an American hotel executive; her countersuit, in which she made it clear that James was homosexual, failed.[9] James was in fact bisexual.[10] After the divorce, James joined a social set in England which included the Mitford sisters and the composer Lord Berners. Surrealism[edit] James is best known as a passionate and early supporter of Surrealism, a movement that was born from the political uncertainty and upheaval between the wars. James appeared in two famous surrealist paintings, both by Magritte: Each suggests an alienated person. New Mexico[edit] Las Pozas[edit] The surrealist sculpture park Las Pozas, Xilitla West Dean[edit] Writings[edit] E.

Beautiful New Zealand England England ( i/ˈɪŋɡlənd/) is a country that is part of the United Kingdom.[1][2][3] It shares land borders with Scotland to the north and Wales to the west. The Irish Sea lies north west of England, whilst the Celtic Sea lies to the south west. The North Sea to the east and the English Channel to the south separate it from continental Europe. The area now called England was first inhabited by modern humans during the Upper Palaeolithic period, but it takes its name from the Angles, one of the Germanic tribes who settled during the 5th and 6th centuries. England's terrain mostly comprises low hills and plains, especially in central and southern England. Toponymy The name "England" is derived from the Old English name Englaland, which means "land of the Angles".[10] The Angles were one of the Germanic tribes that settled in Great Britain during the Early Middle Ages. An alternative name for England is Albion. History Prehistory and antiquity Middle Ages

Romania Romania ( i/roʊˈmeɪniə/ roh-MAY-nee-ə; Romanian: România [romɨˈni.a] ( )), formerly also spelled Roumania[8][9] and Rumania,[10][11] is a country located at the crossroads of Southeastern and Central Europe, on the Lower Danube, north of the Balkan Peninsula and the western shore of the Black Sea. Romania shares a border with Hungary and Serbia to the west, Ukraine and Moldova to the northeast and east, and Bulgaria to the south. With the fall of the Iron Curtain, Romania began its transition towards democracy and a capitalist market economy. Etymology[edit] Romania derives from the Latin romanus, meaning "citizen of Rome".[14] The first known use of the appellation was attested in 16th-century by Italian humanists travelling in Transylvania, Moldavia, and Wallachia.[15][16][17][18] The use of the name Romania to refer to the common homeland of all Romanians—its modern-day meaning—is first documented in the early 19th century. History[edit] Prehistory and antiquity[edit] Middle Ages[edit]

Institut Le Rosey Institut Le Rosey (French pronunciation: ​[ɛ̃stity lə ʁo.zɛ]), commonly referred to as Le Rosey or simply Rosey, is a school near Rolle, Switzerland. It is one of the most prestigious schools in the world and has educated royalties from around the world. The school was founded by Paul-Émile Carnal in 1880 on the site of the 14th-century Château du Rosey near the town of Rolle in the Canton of Vaud. It is one of the oldest boarding schools in Switzerland. The school also owns a campus in the ski resort village of Gstaad in the Canton of Bern, where the student body, faculty, and staff move to during the Winter months of January through March. In 2014, Le Rosey inaugurated the Paul & Henri Carnal Hall, an arts and learning centre for Le Rosey and the La Côte region.[5][6] The school is also planning the sale of its Gstaad winter campus, and a move to a location that can accommodate more personnel and students.[7][8] Overview[edit] History[edit] Academic curriculum[edit] Student life[edit]