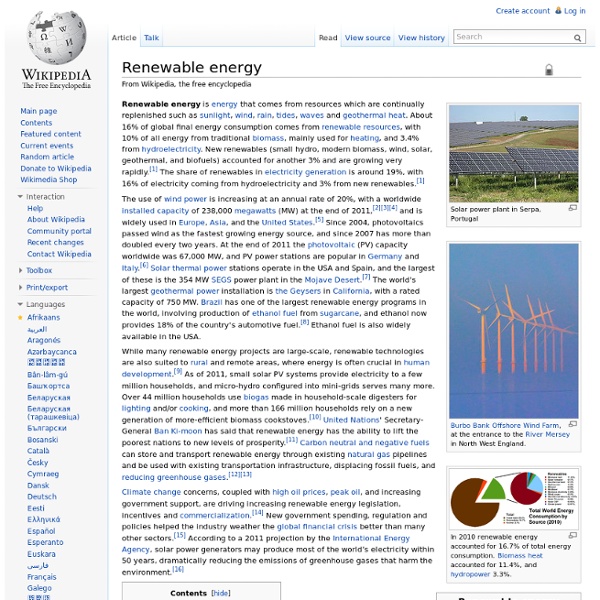 Renewable energy is generally defined as energy that comes from resources which are naturally replenished on a human timescale such as sunlight, wind, rain, tides, waves and geothermal heat.[2] Renewable energy replaces conventional fuels in four distinct areas: electricity generation, hot water/space heating, motor fuels, and rural (off-grid) energy services.[3] About 16% of global final energy consumption presently comes from renewable resources, with 10% [4] of all energy from traditional biomass, mainly used for heating, and 3.4% from hydroelectricity. New renewables (small hydro, modern biomass, wind, solar, geothermal, and biofuels) account for another 3% and are growing rapidly.[5] At the national level, at least 30 nations around the world already have renewable energy contributing more than 20% of energy supply. Renewable energy resources exist over wide geographical areas, in contrast to other energy sources, which are concentrated in a limited number of countries. Overview

Rain The major cause of rain production is moisture moving along three-dimensional zones of temperature and moisture contrasts known as weather fronts. If enough moisture and upward motion is present, precipitation falls from convective clouds (those with strong upward vertical motion) such as cumulonimbus (thunder clouds) which can organize into narrow rainbands. In mountainous areas, heavy precipitation is possible where upslope flow is maximized within windward sides of the terrain at elevation which forces moist air to condense and fall out as rainfall along the sides of mountains. On the leeward side of mountains, desert climates can exist due to the dry air caused by downslope flow which causes heating and drying of the air mass. The movement of the monsoon trough, or intertropical convergence zone, brings rainy seasons to savannah climes. The urban heat island effect leads to increased rainfall, both in amounts and intensity, downwind of cities. Formation Water-saturated air and . Causes

images (1) Nuclear energy Nuclear energy usually means the part of the energy of an atomic nucleus, which can be released by fusion or fission or radioactive decay. Nuclear energy may also refer to: Tidal Power Tidal power, also called tidal energy, is a form of hydropower that converts the energy of tides into useful forms of power, mainly electricity. Although not yet widely used, tidal power has potential for future electricity generation. Tides are more predictable than wind energy and solar power. Among sources of renewable energy, tidal power has traditionally suffered from relatively high cost and limited availability of sites with sufficiently high tidal ranges or flow velocities, thus constricting its total availability. However, many recent technological developments and improvements, both in design (e.g. dynamic tidal power, tidal lagoons) and turbine technology (e.g. new axial turbines, cross flow turbines), indicate that the total availability of tidal power may be much higher than previously assumed, and that economic and environmental costs may be brought down to competitive levels. Generation of tidal energy[edit] Variation of tides over a day Generating methods[edit] Notes[edit]

Geothermal Enegry From hot springs, geothermal energy has been used for bathing since Paleolithic times and for space heating since ancient Roman times, but it is now better known for electricity generation. Worldwide, 11,400 megawatts (MW) of geothermal power is online in 24 countries in 2012.[5] An additional 28 gigawatts of direct geothermal heating capacity is installed for district heating, space heating, spas, industrial processes, desalination and agricultural applications in 2010.[6] Geothermal power is cost effective, reliable, sustainable, and environmentally friendly,[7] but has historically been limited to areas near tectonic plate boundaries. Recent technological advances have dramatically expanded the range and size of viable resources, especially for applications such as home heating, opening a potential for widespread exploitation. Geothermal wells release greenhouse gases trapped deep within the earth, but these emissions are much lower per energy unit than those of fossil fuels. History

images (3) Natural gas Natural gas is a fossil fuel formed when layers of buried plants, gases, and animals are exposed to intense heat and pressure over thousands of years. The energy that the plants originally obtained from the sun is stored in the form of chemical bonds in natural gas. Natural gas is a nonrenewable resource because it cannot be replenished on a human time frame.[1] Natural gas is a hydrocarbon gas mixture consisting primarily of methane, but commonly includes varying amounts of other higher alkanes and even a lesser percentage of carbon dioxide, nitrogen, and hydrogen sulfide.[2] Natural gas is an energy source often used for heating, cooking, and electricity generation. It is also used as fuel for vehicles and as a chemical feedstock in the manufacture of plastics and other commercially important organic chemicals. Natural gas is found in deep underground rock formations or associated with other hydrocarbon reservoirs in coal beds and as methane clathrates. Sources[edit] Natural gas[edit]

Types of Alternative Energy images (4) Solar energy Solar energy is radiant light and heat from the sun harnessed using a range of ever-evolving technologies such as solar heating, solar photovoltaics, solar thermal energy, solar architecture and artificial photosynthesis.[1][2] In 2011, the International Energy Agency said that "the development of affordable, inexhaustible and clean solar energy technologies will have huge longer-term benefits. It will increase countries’ energy security through reliance on an indigenous, inexhaustible and mostly import-independent resource, enhance sustainability, reduce pollution, lower the costs of mitigating global warming, and keep fossil fuel prices lower than otherwise. These advantages are global. Hence the additional costs of the incentives for early deployment should be considered learning investments; they must be wisely spent and need to be widely shared".[1] Energy from the Sun About half the incoming solar energy reaches the Earth's surface. Early commercial adaption Solar thermal Water heating

Biofuel A biofuel is a fuel that contains energy from geologically recent carbon fixation. These fuels are produced from living organisms. Examples of this carbon fixation occur in plants and microalgae. These fuels are made by a biomass conversion (biomass refers to recently living organisms, most often referring to plants or plant-derived materials). This biomass can be converted to convenient energy containing substances in three different ways: thermal conversion, chemical conversion, and biochemical conversion. Bioethanol is an alcohol made by fermentation, mostly from carbohydrates produced in sugar or starch crops such as corn, sugarcane, or sweet sorghum. Biodiesel can be used as a fuel for vehicles in its pure form, but it is usually used as a diesel additive to reduce levels of particulates, carbon monoxide, and hydrocarbons from diesel-powered vehicles. Liquid fuels for transportation[edit] First-generation biofuels[edit] Ethanol[edit] Biodiesel[edit] Other bioalcohols[edit]