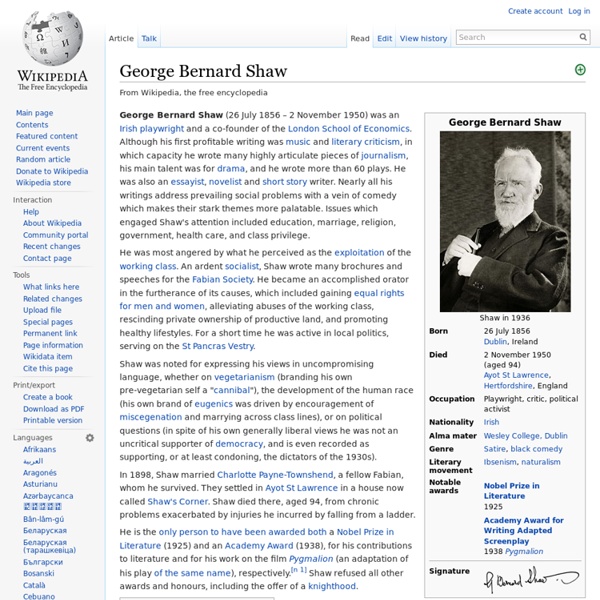 George Bernard Shaw (26 July 1856 – 2 November 1950) was an Irish playwright and a co-founder of the London School of Economics. Although his first profitable writing was music and literary criticism, in which capacity he wrote many highly articulate pieces of journalism, his main talent was for drama, and he wrote more than 60 plays. He was also an essayist, novelist and short story writer. He was most angered by what he perceived as the exploitation of the working class. Shaw was noted for expressing his views in uncompromising language, whether on vegetarianism (branding his own pre-vegetarian self a "cannibal"), the development of the human race (his own brand of eugenics was driven by encouragement of miscegenation and marrying across class lines), or on political questions (in spite of his own generally liberal views he was not an uncritical supporter of democracy, and is even recorded as supporting, or at least condoning, the dictators of the 1930s). Life[edit] Education[edit]

Carroll Quigley Carroll Quigley (/ˈkwɪɡli/; November 9, 1910 – January 3, 1977) was an American historian and theorist of the evolution of civilizations. He is noted for his teaching work as a professor at Georgetown University, for his academic publications, and for his research on secret societies.[1][2] Life and career[edit] Quigley was born in Boston, and attended Harvard University, where he studied history and earned B.A, M.A., and Ph.D. degrees. From 1941 until 1972, he taught a two-semester course at Georgetown on the development of civilizations. In addition to his academic work, Quigley served as a consultant to the U.S. Quigley retired from Georgetown in June 1976 and died the following year.[1] Major conclusions[edit] Inclusive diversity[edit] Quigley asserts that any intolerance or rigidity in the religious practices of the West are aberrations from its nature of inclusivity and diversity. Institutionalization and the fall of civilizations[edit] Weapons and democracy[edit] Style[edit]

Fabian Society Originally, the Fabian society was committed to the establishment of a socialist economy, alongside a commitment to British imperialism as a progressive and modernizing force.[3] Organisational history[edit] Establishment[edit] Blue plaque at 17 Osnaburgh St, where the Society was founded in 1884. Fabian Society was named after "Fabius the Delayer" at the suggestion of Frank Podmore, above. Tortoise is the symbol of Fabian Society, representing its goal of gradual expansion of socialism.[1] The Fabian Society, which favoured gradual change rather than revolutionary change, was named – at the suggestion of Frank Podmore – in honour of the Roman general Fabius Maximus (nicknamed "Cunctator", meaning "the Delayer"). An explanatory note appearing on the title page of the group's first pamphlet declared: Organizational growth[edit] Immediately upon its inception, the Fabian Society began attracting many prominent contemporary figures drawn to its socialist cause, including George Bernard Shaw, H.

Androcles and the Lion (play) Androcles and the Lion is Shaw's retelling of the tale of Androcles, a slave who is saved by the requited mercy of a lion. In the play, Shaw portrays Androcles to be one of the many Christians being led to the Colosseum for torture. Characters in the play exemplify several themes and takes on both modern and supposed early Christianity, including cultural clash between Jesus' teachings and traditional Roman values. The Shaw Alphabet Edition of Androcles and the Lion, 1962. The short play is often printed with a preface that includes a long examination of the Gospels by Shaw, in which Shaw analyzes the Bible and proclaims his findings. The play was written at a time when the Christian Church was an important influence on society and there was strong pressure on non-believers in public life. The play has themes of martyrdom and persecution which are portrayed through the vehicle of comedy. A notable[why?] Androcles and the Lion (play) at the Internet Broadway Database

G. K. Chesterton Early life[edit] G.K. Chesterton at the age of 17. Born in Campden Hill in Kensington, London, Chesterton was baptized at the age of one month into the Church of England,[8] though his family themselves were irregularly practising Unitarians.[9] According to his autobiography, as a young man Chesterton became fascinated with the occult and, along with his brother Cecil, experimented with Ouija boards. Family life[edit] Chesterton married Frances Blogg in 1901; the marriage lasted the rest of his life. Career[edit] Chesterton loved to debate, often engaging in friendly public disputes with such men as George Bernard Shaw,[13] H. Visual wit[edit] Chesterton usually wore a cape and a crumpled hat, with a swordstick in hand, and a cigar hanging out of his mouth. Radio[edit] In 1931, the BBC invited Chesterton to give a series of radio talks. The talks were very popular. Death and veneration[edit] Writing[edit] Chesterton's writings consistently displayed wit and a sense of humour.

Social justice Social justice is the ability people have to realize their potential in the society where they live.[1] Classically, "justice" (especially corrective justice or distributive justice) referred to ensuring that individuals both fulfilled their societal roles,[2] and received what was due from society. "Social justice" is generally used to refer to a set of institutions which will enable people to lead a fulfilling life and be active contributors to their community.[3] The goal of social justice is generally the same as human development, and the relevant institutions are usually taken to include education, health care, social security, labour rights, as well as a broader system of public services, progressive taxation and regulation of markets, to ensure fair distribution of wealth, equality of opportunity, and no gross inequality of outcome. History[edit] The different concepts of justice, as discussed in ancient Western philosophy, were typically centered upon the community. Islam[edit]

Henrik Ibsen Several of his later dramas were considered scandalous to many of his era, when European theatre was expected to model strict morals of family life and propriety. Ibsen's later work examined the realities that lay behind many façades, revealing much that was disquieting to many contemporaries. It utilized a critical eye and free inquiry into the conditions of life and issues of morality. The poetic and cinematic early play Peer Gynt, however, has strong surreal elements.[5] Ibsen is often ranked as one of the truly great playwrights in the European tradition.[6] Richard Hornby describes him as "a profound poetic dramatist—the best since Shakespeare".[7] He is widely regarded as the most important playwright since Shakespeare.[6][8] He influenced other playwrights and novelists such as George Bernard Shaw, Oscar Wilde, Arthur Miller, James Joyce, Eugene O'Neill and Miroslav Krleža. Early life[edit] Ibsen's grandmother Hedevig Altenburg, née Paus (cf. the character Hedvig in The Wild Duck)

Antony C. Sutton Antony Cyril Sutton (February 14, 1925 – June 17, 2002) was a British and American economist, historian, and writer. Biography[edit] Sutton studied at the universities of London, Göttingen, and California, and received his D.Sc. from the University of Southampton. He was an economics professor at California State University, Los Angeles and a research fellow at Stanford University's Hoover Institution from 1968 to 1973. During his time at the Hoover Institution, he wrote the major study Western Technology and Soviet Economic Development (in three volumes), arguing that the West played a major role in developing the Soviet Union from its very beginnings up until the present time (1970). In 1973, Sutton published a popularized, condensed version of the three volumes called National Suicide: Military Aid to the Soviet Union and was thereby[citation needed] forced out of the Hoover Institution. In his three-volume detailed account of Soviet Purchases of Western Equipment and Technology ...