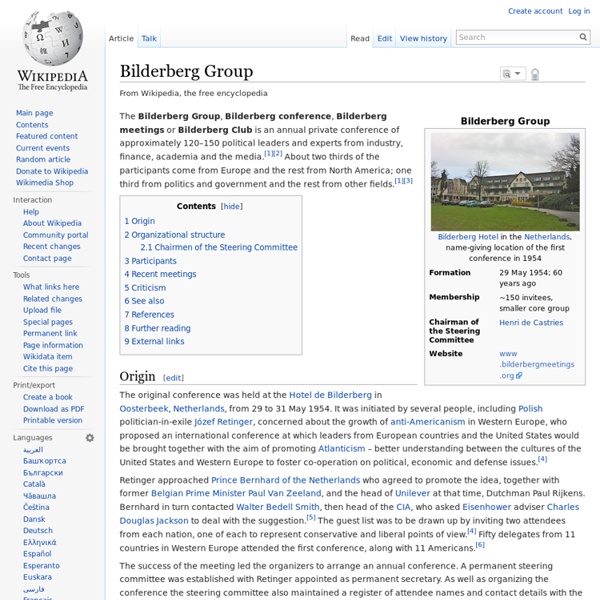 The Bilderberg Group, Bilderberg conference, Bilderberg meetings or Bilderberg Club is an annual private conference of approximately 120–150 political leaders and experts from industry, finance, academia and the media.[1][2] About two thirds of the participants come from Europe and the rest from North America; one third from politics and government and the rest from other fields.[1][3] §Origin[edit] The original conference was held at the Hotel de Bilderberg in Oosterbeek, Netherlands, from 29 to 31 May 1954. It was initiated by several people, including Polish politician-in-exile Józef Retinger, concerned about the growth of anti-Americanism in Western Europe, who proposed an international conference at which leaders from European countries and the United States would be brought together with the aim of promoting Atlanticism – better understanding between the cultures of the United States and Western Europe to foster co-operation on political, economic and defense issues.[4] Related:  New World Order NWO

1921 Council on Foreign Relations The Council on Foreign Relations (CFR) is an American nonprofit, nonpartisan membership organization, publisher, and think tank specializing in U.S. foreign policy and international affairs. The CFR is considered to be the nation's "most influential foreign-policy think tank".[1] Its membership has included senior politicians, more than a dozen Secretaries of State, CIA directors, bankers, lawyers, professors, and senior media figures. The CFR regularly convenes meetings at which government officials, global business leaders and prominent members of the intelligence/foreign-policy community discuss major international issues. The CFR was founded in 1921 and is headquartered in New York City, with an additional office in Washington, D.C.. History[edit] Origins[edit] Elihu Root, a powerful corporate lawyer who served as Secretary of State, Secretary of War, and U.S. Cold War era[edit] Dwight D. Vietnam created a rift within the organization. Current status[edit] Mission[edit] Membership[edit]

Washington Times Breaks U.S. Media Blackout On Bilderberg Washington Post fails to mention the fact that dozens of hugely influential power brokers are meeting in their own back yard Paul Joseph Watson Prison Planet.com Thursday, May 31, 2012 The U.S. media blackout on Bilderberg has been broken, with the Washington Times being the first mainstream U.S. news outlet to cover the gathering of over 100 power brokers in Chantilly, Virginia which kicks off today – but the Washington Post remains mute. The Times reports that a half-mile security perimeter has been set up around the Westfields Marriott hotel and that a photographer for the newspaper was told by police, “any attempt to get close to the building would result in arrest.” It’s all part of the unprecedented security crackdown now in force to protect global financiers, banking heads, media and technology moguls as well as elected officials from the very public whose lives are affected by their decisions. “This year, it’s the biggest ever. A d v e r t i s e m e n t Print this page. Historic!

1973 Trilateral Commission The Trilateral Commission is a non-governmental, non-partisan discussion group founded by David Rockefeller[1] in July 1973, to foster closer cooperation among North America, Western Europe, and Japan. History[edit] Founding[edit] Sensing a profound discord among the nations of North America, Europe and Japan, the Trilateral Commission was founded to foster substantive political and economic dialogue across the world. To quote its founding declaration: "Growing interdependence is a fact of life of the contemporary world. Zbigniew Brzezinski, United States National Security Advisor to President Jimmy Carter from 1977 to 1981, and a professor at Columbia University and Rockefeller advisor who was a specialist on international affairs, left his post at the time to organize the group along with:[3] Henry D. Other founding members included Alan Greenspan and Paul Volcker, both later heads of the Federal Reserve system. Meetings[edit] Membership[edit] Criticisms[edit] From the left[edit]

Security tighter than ever at Bilderberg conference Chantilly’s Westfields Marriott hotel is the site of an “unprecedented” security crackdown as the world’s richest and most powerful arrive for the annual Bilderberg conference. Hundreds of demonstrators are expected to protest the highly secretive gathering, which kicks off Thursday and lasts through the weekend. The off-the-record meeting, well known in conspiracy lore but typically given little to no media attention each year, once again will bring together heads of state, billionaire bankers, leading businessmen and other international movers and shakers. A perimeter of about a half-mile has been set up around the Northern Virginia hotel, and all non-Bilderberg guests reportedly were kicked out of their rooms. Tight security is nothing new at the infamous meeting, but more press coverage in recent years — driven largely by social media and radio host Alex Jones, among others — has led organizers to thicken the protective shell around the conference to new heights.

List of acquired or bankrupt banks in the late 2000s financial crisis ... This is a list of financial institutions that have been affected by the Great Recession. The list includes banks (including commercial banks and investment banks), building societies and insurance companies that have either been: taken over or merged with another financial institution;nationalised by a government or central bank; ordeclared insolvent or liquidated. In the United States, the Federal Deposit Insurance Corporation (FDIC) may assume deposits of banks or allow other banks to assume them. Acquisitions[edit] British banking rescue scheme[edit] Her Majesty's Government announced a scheme to acquire stakes in 3 of the largest UK banks. Failures[edit] United States[edit] United Kingdom[edit] Latvia[edit] See also[edit] Notes[edit] References[edit]

Declaration by United Nations The Declaration by United Nations was a World War II document agreed on 1 January 1942 during the Arcadia Conference by 26 governments: the Allied "Big Four" (the US, the UK, the USSR, and China), nine American allies in Central America and the Caribbean, the four British Dominions, British India, and eight Allied governments-in-exile, for a total of twenty-six nations. The parties pledged to uphold the Atlantic Charter, to employ all their resources in the war against the Axis powers, and that none of the signatory nations would seek to negotiate a separate peace with Nazi Germany or Japan in the same manner that the nations of the Triple Entente had agreed not to negotiate a separate peace with any or all of the Central Powers in World War I under the Unity Pact. See also[edit] Notes[edit] References[edit]

Financial crisis of 2007–2010 The TED spread (in red) increased significantly during the financial crisis, reflecting an increase in perceived credit risk. The financial crisis of 2007–2008, also known as the Global Financial Crisis and 2008 financial crisis, is considered by many economists the worst financial crisis since the Great Depression of the 1930s.[1] It resulted in the threat of total collapse of large financial institutions, the bailout of banks by national governments, and downturns in stock markets around the world. In many areas, the housing market also suffered, resulting in evictions, foreclosures and prolonged unemployment. In the immediate aftermath of the financial crisis palliative fiscal and monetary policies were adopted to lessen the shock to the economy.[19] In July 2010, the Dodd–Frank regulatory reforms were enacted in the U.S. to lessen the chance of a recurrence.[20] Background[edit] Share in GDP of U.S. financial sector since 1860[27] The U.S. Subprime lending[edit]

Five Eyes The "Five Eyes", often abbreviated as "FVEY", refer to an anglophonic alliance comprising Australia, Canada, New Zealand, the United Kingdom and the United States. These countries are bound by the multilateral UKUSA Agreement - a treaty for joint cooperation in signals intelligence.[1][2][3] The origins of the FVEY can be traced back to World War II, when the Atlantic Charter was issued by the Allies to lay out their goals for a post-war world. During the course of the Cold War, the ECHELON surveillance system was initially developed by the FVEY to monitor the communications of the former Soviet Union and the Eastern Bloc, although it was later used to monitor billions of private communications worldwide.[4][5] In the late 1990s, the existence of ECHELON was disclosed to the public, triggering a major debate in the European Parliament and, to a smaller extent, the United States Congress. Overview[edit] History[edit] Origins (1940s–1950s)[edit] Cold War (1950s–1990s)[edit] Five Eyes Nine Eyes

Mitch Daniels: US faces &#039;survival-level&#039; economic threat <img name="holdingImage" class="holding" src=" alt="Mitch Daniels" /><div class="warning"><p><strong>Please turn on JavaScript.</strong> Media requires JavaScript to play. </p></p></div> Governor Mitch Daniels on why he believes the stimulus is not working Newsnight's Paul Mason meets Mitch Daniels, the Republican governor of Indiana who is tipped to challenge Barack Obama for the US presidency in 2012. "America faces for the first time, other than the nuclear threat of a few decades ago, a genuine survival level issue," Mitch Daniels says. "My reading of history is that there are points of no return, past which nations will not recover to anything like their previous strength." It is apocalyptic language, and since Mr Daniels is widely regarded as having a decent chance of becoming the next US president, all the more alarming. But towards what, I ask him, perennial decline? "Decline might not be the right word.

1940 British Security Coordination BSC operated from the 35th and 36th floors of the International Building, Rockefeller Center, New York during World War II British Security Coordination (BSC) was a covert organization set up in New York City by the British Secret Intelligence Service (MI6) in May 1940 upon the authorization of Prime Minister Winston Churchill. Its cover was the British Passport Control Office. BSC benefitted from support given by the chief of the U.S. Office of Strategic Services, William J. Donovan (whose organization was modelled on British activities), and U.S. Beginnings[edit] As head of the British Security Coordination, William Stephenson has been credited with changing American public opinion from an isolationist stance to a supportive tendency regarding America's entry into World War II.[4] Operation[edit] The BSC was registered by the State Department as a foreign entity. Counter-smuggling and "shipping security"[edit] Notable employees[edit] See also[edit] Notes[edit] References[edit]

China&#039;s Hu grants aid to Tanzania China's President Hu Jintao has granted $22m (£15m) in aid to Tanzania as he continues his tour of Africa. Tanzania is one of the largest African recipients of Chinese aid and bilateral trade rose by nearly 50% in 2007. Mr Hu has visited Mali and Senegal and will end his tour in Mauritius. China's trade with Africa has boomed in recent years but has stalled recently. China wants to show that it is not only interested in Africa because of its oil and mineral wealth, say analysts. 'Exemplary ties' After witnessing the signing of a number of aid deals with Tanzanian President Jakaya Kikwete, President HU praised their two countries' relationship. "The traditional friendship between China and Tanzania... can be viewed as an exemplary relationship of sincerity, solidarity and co-operation between China and an African country, and for that matter between two developing countries," Mr Hu said. China is getting oil from Angola and Sudan, and minerals from Zambia, Congo and many others.