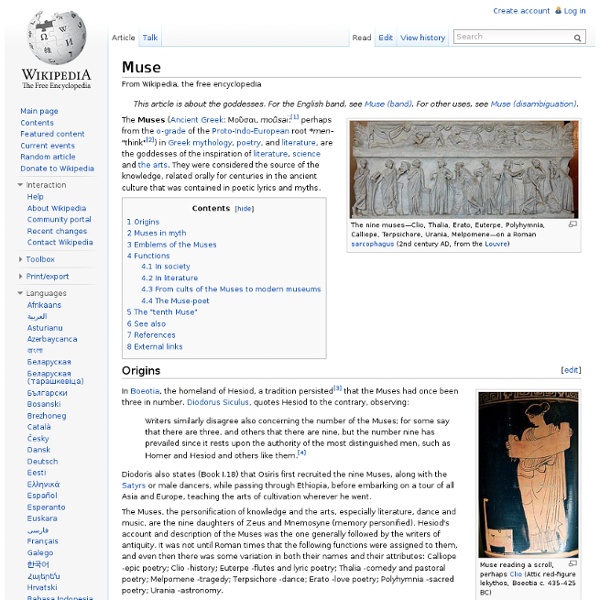 The nine muses—Clio, Thalia, Erato, Euterpe, Polyhymnia, Calliope, Terpsichore, Urania, Melpomene—on a Roman sarcophagus (2nd century AD, from the Louvre) The Muses, (Ancient Greek: Μοῦσαι, moũsai:[1] perhaps from the o-grade of the Proto-Indo-European root *men- "think"[2]) in Greek mythology, poetry and literature, are the goddesses of the inspiration of literature, science and the arts. They were considered the source of the knowledge, related orally for centuries in the ancient culture, that was contained in poetic lyrics and myths. The Muses were both the embodiments and sponsors of performed metrical speech: mousike (hence the English term "music") was just "one of the arts of the Muses". Others included Science, Geography, Mathematics, Philosophy, and especially Art, Drama, and inspiration. Some authors invoke Muses when writing poetry, hymns or epic history. Origins[edit] Muse reading a scroll, perhaps Clio (Attic red-figure lekythos, Boeotia c. 435–425 BC) In myth[edit] O Muse!

Character (arts) The study of a character requires an analysis of its relations with all of the other characters in the work.[9] The individual status of a character is defined through the network of oppositions (proairetic, pragmatic, linguistic, proxemic) that it forms with the other characters.[10] The relation between characters and the action of the story shifts historically, often miming shifts in society and its ideas about human individuality, self-determination, and the social order.[11] In his book Aspects of the novel, E. M. Forster defined two basic types of characters, their qualities, functions, and importance for the development of the novel: flat characters and round characters.[24] Flat characters are two-dimensional, in that they are relatively uncomplicated and do not change throughout the course of a work. By contrast, round characters are complex and undergo development, sometimes sufficiently to surprise the reader.[25] Aston, Elaine, and George Savona. 1991.

untitled EDITORS NOTE: Although the TRIZ Journal does not endorse Tao as a religious belief system it does consider this particular paper to be an interesting perspective on the subject. Andre de Zanger and Judith Morgan Creativity Institute - 1664 3rd Avenue New York, NY 10128 (212) 289-8856 e-mail: creativityinstitute@juno.com The Dialectic Paradox or The Resolution of Opposites The philosophy of the "Tao" or the "Way", was set down in approximately 600 B.C. by Lao Tzu in 81 poems, entitled "The Tao Teh Ching". The Tao poems contain a philosophy of life that has lasted through the centuries and they have been retranslated as well as rewritten many times. Tao #2 People finding one thing beautiful, Think another unbeautiful, Finding one creation sound, They judge another unsound. (From the book "Tao of Creativity") When applied to creativity the importance of opposites resonates with Einstein’s idea that "the answer is within the problem". Tao #16 5. 6. Tao #23 References:

Creating Environments That Optimize Creativity and Inspiration Today’s article takes a look at how to help maximize creative thought by carefully structuring the environment around you. Everything from the design of your office to the specific hours of the day that you choose to work can play a key role in how effective you are when it comes time to actually get things done. The essence of creativity plays a very important role in art and design. When building any piece of work you’ll want to focus not only on your mood but also atmosphere, ambiance, and emotions. Consider some of your favorite designs or artists. I’ve gotten into a few ideas regarding workflow and regaining power over your projects. Empowering your Creative Side Often times I’ll read or hear about people questioning their artistic skills. Society tends to lump these folks together, although there’s a lot more in common than creative thinking. Sounds pretty convoluted I know. Developing Personality Once you spend time training your mindset there’s almost nothing beyond your reach.

Make Something Cool Every Day I’ve seen a lot of designers take on a daily project of some sort lately. I think it’s a great idea—something to keep your creativity flowing, especially during downtime. And I’ve particularly enjoyed watching the progress Mark Weaver has made with his Make Something Cool Every Day project. I’m not sure what the thinking behind these pieces are, but I’m really drawn to his layering of photography, illustration, color and type. You can see everything he’s completed so far on Flickr or Bēhance. About Courtney Courtney is the founder of Design Work Life and Seamless Creative, a small design studio she runs with her husband Brian. Read More: View Courtney’s Posts Follow Courtney:

Talent Development Resources : creativity and personal growth Being creative and realizing our talents involves a lot of self-awareness and respecting who we really are, including our unconscious depths. In an interview about her film “Flightplan,” Jodie Foster commented, “When you’re a dramatic actor you look for films that hit you in the gut, in this unconscious place that really moves you, and then you can’t help but make the movie because it’s something that you fear and you want to know more about it.” She added, “I think that every film that I do, even though it might not relate to me autobiographically, has some very personal pull in there and there are questions that I ask myself that I can’t really resolve any other way.” [From darkhorizons.com interview by Paul Fischer, Sept 15 2005.] In another interview, Foster says she was attracted to the film because of the “full journey of the character, the primal connection to children. In a 1991 interview, she acknowledged “There are certain sorts of unconscious paths you choose.”

How To Steal Like An Artist by Austin Kleon Wednesday, March 30th, 2011 Buy the book: Amazon | B&N | More… Here’s what a few folks have said about it: “Brilliant and real and true.”—Rosanne Cash“Filled with well-formed advice that applies to nearly any kind of work.” Read an excerpt below… Tags: steal like an artist