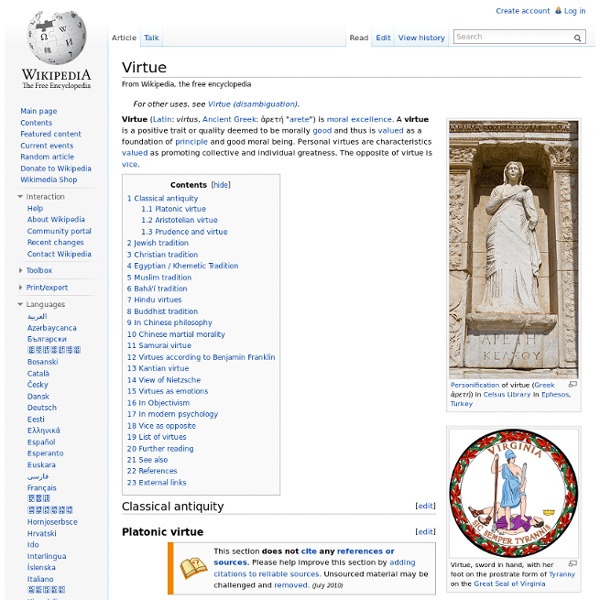 Ancient history[edit] Classical antiquity[edit] Platonic virtue[edit] The four classic Cardinal virtues are:[4] This enumeration is traced to Greek philosophy and was listed by Plato in addition to piety: ὁσιότης (hosiotēs), with the exception that wisdom replaced prudence as virtue.[5] Some scholars[6] consider either of the above four virtue combinations as mutually reducible and therefore not cardinal. Aristotelian virtue[edit] Prudence and virtue[edit] Seneca, the Roman Stoic, said that perfect prudence is indistinguishable from perfect virtue. Religious traditions[edit] Judaism[edit] Loving God, and obeying his laws, in particular the Ten Commandments are central to Jewish conceptions of virtue. A classic articulation of the Golden Rule came from the first century Rabbi Hillel the Elder. Christianity[edit] Islam[edit] In Islam, the Qur'an is believed to be the literal word of God, and the definitive description of virtue. Hinduism[edit] Buddhism[edit] Bahá'í faith[edit] Daoism[edit] Related:  - • grtbsndrvr

Catullus 101 Catullus 101 is an elegiac poem written by the Roman poet Gaius Valerius Catullus. It is addressed to Catullus' dead brother or, strictly speaking, to the "mute ashes" which are the only remaining evidence of his brother's body. The tone is grief-stricken and tender, with Catullus trying to give the best gift he had to bestow (a poem) on his brother, who was taken prematurely. The last words, "Hail and Farewell" (in Latin, ave atque vale), are among Catullus' most famous; an alternative modern translation might be "I salute you...and goodbye". Text[edit] Another elegy[edit] This is one of three poems in which Catullus tries to cope with the loss of his brother. Modern translations[edit] In addition to its inclusion among the many translations of Catullus' collected poems, Carmen 101 is featured in Nox (2010), a book by Canadian poet and classicist Anne Carson that comes in an accordion format within a box. Musical settings[edit] Notes[edit] Bibliography[edit] Cederstrom, E (1981).

Terror management theory Terror management theory (TMT) is both a social and evolutionary psychology theory originally proposed by Jeff Greenberg, Sheldon Solomon, and Tom Pyszczynski[1] and codified in their book The Worm at the Core: On the Role of Death in Life (2015). It proposes that a basic psychological conflict results from having a self-preservation instinct while realizing that death is inevitable and to some extent unpredictable. This conflict produces terror, and the terror is then managed by embracing cultural beliefs, or symbolic systems that act to counter biological reality with more durable forms of meaning and value.[1][2] Because cultural values determine that which is meaningful, they are also the foundation for self-esteem. TMT describes self-esteem as being the personal, subjective measure of how well an individual is living up to their cultural values.[2] Background[edit] Ernest Becker, 1973[7] Becker expounded upon the previous writings of Sigmund Freud, Søren Kierkegaard, Norman O.

Call for Entry: Vilém Flusser Residency Programme for Artistic Research Submission Deadline: 1 December 2013 Submit to the Call for Entry here. We ‘know’ that there is nothing wonderful about the world, or about ourselves, (...) and still we produce wonder after wonder. Perhaps (...) what science is really about is not to explain wonders, but to create them. /Vilém Flusser/ We are calling upon artistic research to actively explore the capabilities and limitations of transdisciplinary and transmedial situations in contemporary culture and thus to understand artistic research as exploring the links between aesthetics, materiality, and politics. The Vilém Flusser Residency Programme for Artistic Research supports projects and activities which are simultaneously conceptual and practice-based. For Vilém Flusser, theory and praxis are intrinsically tied to each other. This is not a production grant. Note The period of residency is three months: from 1 May till 31 July 2014. Submission Deadline: 1 December 2013 | Conditions of Entry © Pinar Yoldas

Cicero 1st-century BC Roman lawyer, orator, philosopher and statesman Marcus Tullius Cicero[n 1] ( SISS-ə-roh, Classical Latin: [ˈmaːrkʊs ˈtʊllɪ.ʊs ˈkɪkɛroː]; 3 January 106 BC – 7 December 43 BC)[2] was a Roman statesman, orator, lawyer and philosopher, who served as consul in the year 63 BC. He came from a wealthy municipal family of the Roman equestrian order, and is considered one of Rome's greatest orators and prose stylists.[3][4] His influence on the Latin language was immense: it has been said that subsequent prose was either a reaction against or a return to his style, not only in Latin but in European languages up to the 19th century.[5][6] Cicero introduced the Romans to the chief schools of Greek philosophy[citation needed]and created a Latin philosophical vocabulary (with neologisms such as evidentia,[7] humanitas, qualitas, quantitas, and essentia),[8] distinguishing himself as a translator and philosopher. Personal life[edit] Early life[edit] Family[edit] Public career[edit]

Left–right political spectrum The left–right political spectrum is a system of classifying political positions, ideologies and parties, from equality on the left to social hierarchy on the right.[1] Left-wing politics and right-wing politics are often presented as opposed, although a particular individual or group may take a left-wing stance on one matter and a right-wing stance on another; and some stances may overlap and be considered either left- or right-wing depending on the ideology.[2] In France, where the terms originated, the Left has been called "the party of movement" and the Right "the party of order".[3][4][5][6] The intermediate stance is called centrism and a person with such a position is a moderate or centrist. History of the terms[edit] By 1914, the Left half of the legislature in France was composed of Unified Socialists, Republican Socialists and Socialist Radicals, while the parties that were called "Left" now sat on the right side. Ideological groupings across the spectrum[edit] See also[edit]

Kant, Deleuze, and the virtual What follows is an extract from the chapter I am in the middle of writing now — about “Deleuze’s Encounter with Whitehead,’” and the relations of both Deleuze and Whitehead to Kant. This passage doesn’t have much to do with Whitehead; it is mostly my endeavor to think about what Deleuze means by the ‘virtual’, and how this can be understood in Kantian terms. Still to be written is the part in which I relate all this back to Whitehead’s interest in potentiality, and his concept of potentials as what he calls “eternal objects.” Deleuze’s own “transcendental empiricism” centers on his notion of the virtual. I think that this much-disputed concept can best be understood in Kantian terms. There are, of course, important differences between Kant’s transcendental argument and Deleuze’s invocation of the virtual. The virtual, on the other hand, is altogether real in its own right; it “possesses a full reality by itself” (211).

Roman Republic Period of ancient Roman civilization (509–27 BC) The Roman Republic (Latin: Rēs pūblica Rōmāna [ˈreːs ˈpuːblɪka roːˈmaːna]) was the era of classical Roman civilization, led by the Roman people, beginning with the overthrow of the Roman Kingdom, traditionally dated to 509 BC, and ending in 27 BC with the establishment of the Roman Empire. During this period, Rome's control expanded from the city's immediate surroundings to hegemony over the entire Mediterranean world. Roman society under the Republic was primarily a cultural mix of Latin and Etruscan societies, as well as of Sabine, Oscan, and Greek cultural elements, which is especially visible in the Roman Pantheon. History[edit] Foundation (509 BC)[edit] The Senate agreed to abolish kingship. Most modern scholarship describes these events as the quasi-mythological detailing of an aristocratic coup within Tarquin's own family, not a popular revolution. Rome in Latium (509–387 BC)[edit] Early campaigns[edit] Plebeians and patricians[edit]

How Stars of the Lid Made Two Ambient Masterworks Sometime after the release of their sixth studio album, 2001’s The Tired Sounds of the Stars of the Lid, Austin-borne drone duo Stars of the Lid quietly, patiently moved from obscurity into semi-obscurity, renown as the most acclaimed ambient musicians since the heyday of Brian Eno. The three-LP opus featured more than two hours of melancholy, wistful orchestral drones that swelled and dissolved, a home-brewed sound with the ambitions of minimalist composition and the insularity of indie rock. It didn’t make too much of a ripple upon its release beyond raves from alt-leaning press, but it slowly spread. Their record label, indie-ambient touchstone Kranky, is responding with long-demanded vinyl represses of both 2001’s Tired Sounds and 2007’s Refinement, both out of print for some time. We caught up with Wiltzie and McBride to ponder how — and why — their fragile drone sculptures went from quiet critical sensation to the iconic standard for 21st Century ambient. Popular on Rolling Stone