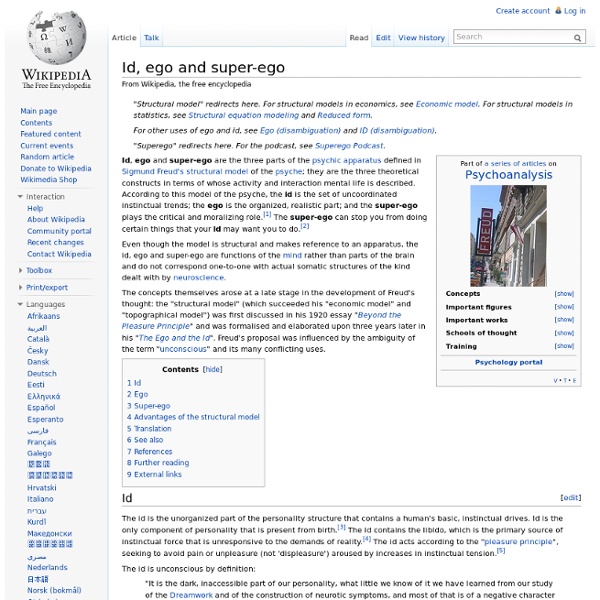 Although the model is structural and makes reference to an apparatus, the id, ego and super-ego are purely symbolic concepts about the mind and do not correspond to actual somatic structures of the brain (such as the kind dealt with by neuroscience). The concepts themselves arose at a late stage in the development of Freud's thought: the "structural model" (which succeeded his "economic model" and "topographical model") was first discussed in his 1920 essay Beyond the Pleasure Principle and was formalized and elaborated upon three years later in his The Ego and the Id. Freud's proposal was influenced by the ambiguity of the term "unconscious" and its many conflicting uses. Id[edit] According to Freud the id is unconscious by definition: In the id, "contrary impulses exist side by side, without cancelling each other out. ... Developmentally, the id precedes the ego; i.e., the psychic apparatus begins, at birth, as an undifferentiated id, part of which then develops into a structured ego.

What are Present Value and Future Value Finance is all about time and risk. It’s basically a study of how people make decisions regarding the allocation of resources over time and the handling of risks of them. Playing with it requires some very fundamental techniques and strategies, which are all indispensable if not enough for success in financial markets. And the idea of present value is one of the most important that will help you value financial assets over time thus making choices between current resources and future gains. First off, money today is always more valuable than the same amount of money future. Therefore, the present value of $112.5 3 years from now is $100. Present value is the amount of money today that would be needed to produce, using prevailing interest rates, a given future amount of money. Conversely, future value is the amount of money in future that a certain amount of money today will yield, given prevailing interest rates. In the example of $100, the future value of $100 after 3 years is $112.5.

Georges Danton Georges Jacques Danton (French: [ʒɔʁʒ dɑ̃tɔ̃]; 26 October 1759 – 5 April 1794) was a leading figure in the early stages of the French Revolution, in particular as the first president of the Committee of Public Safety. Danton's role in the onset of the Revolution has been disputed; many historians describe him as "the chief force in the overthrow of the French monarchy and the establishment of the First French Republic".[1] He was guillotined by the advocates of revolutionary terror after accusations of venality and leniency toward the enemies of the Revolution. Early life[edit] Danton was born in Arcis-sur-Aube in northeastern France to Jacques Danton and Mary Camus; a respectable, but not wealthy family. After obtaining a good education he became an Advocate in Paris.[3] He married Antoinette Gabrielle Charpentier (6 January 1760 – 10 February 1793) on 14 June 1787 at the church of Saint-Germain-l'Auxerrois in Paris. Antoinette Gabrielle Charpentier Danton Revolution[edit] Rise[edit]

Net present value In finance, the net present value (NPV) or net present worth (NPW)[1] of a time series of cash flows, both incoming and outgoing, is defined as the sum of the present values (PVs) of the individual cash flows of the same entity. In the case when all future cash flows are incoming (such as coupons and principal of a bond) and the only outflow of cash is the purchase price, the NPV is simply the PV of future cash flows minus the purchase price (which is its own PV). NPV is a central tool in discounted cash flow (DCF) analysis and is a standard method for using the time value of money to appraise long-term projects. Used for capital budgeting and widely used throughout economics, finance, and accounting, it measures the excess or shortfall of cash flows, in present value terms, above the cost of funds. NPV can be described as the “difference amount” between the sums of discounted: cash inflows and cash outflows. Formula[edit] where – the time of the cash flow ) where is given by: Example[edit]

www.healthline Share on Pinterest Transference occurs when a person redirects some of their feelings or desires for another person to an entirely different person. One example of transference is when you observe characteristics of your father in a new boss. As another example, you may meet a new neighbor and immediately see a physical resemblance to a previous spouse. Transference can happen even in the face of distinct differences. Transference can also happen in a healthcare setting. Sometimes, as part of their therapy process, some therapists even actively encourage it. For instance, the therapist may see an unconscious reaction to intimacy in their patient’s inability to form strong bonds with significant others. Countertransference occurs when a therapist redirects their own feelings or desires onto their patients. Therapists are guided by strict professional codes. For example, a therapist can’t be your friend outside of the therapy setting. Projection and transference are very similar.

Claude Lorrain Claude Lorrain (French: [klod lɔ.ʁɛ̃]; born Claude Gellée [ʒəle], called le Lorrain in French; traditionally just Claude in English; c. 1600 – 23 November 1682) was a French painter, draughtsman and etcher of the Baroque era. He spent most of his life in Italy, and is one of the earliest important artists, apart from his contemporaries in Dutch Golden Age painting, to concentrate on landscape painting. His landscapes are usually turned into the more prestigious genre of history paintings by the addition of a few small figures, typically representing a scene from the Bible or classical mythology. By the end of the 1630s he was established as the leading landscapist in Italy, and enjoyed large fees for his work. These gradually became larger, but with fewer figures, more carefully painted, and produced at a lower rate.[1] He was not generally an innovator in landscape painting, except in introducing the Sun into many paintings, which had been rare before. Seaport at sunset (1639), Louvre

Quark A quark (/ˈkwɔrk/ or /ˈkwɑrk/) is an elementary particle and a fundamental constituent of matter. Quarks combine to form composite particles called hadrons, the most stable of which are protons and neutrons, the components of atomic nuclei.[1] Due to a phenomenon known as color confinement, quarks are never directly observed or found in isolation; they can be found only within hadrons, such as baryons (of which protons and neutrons are examples), and mesons.[2][3] For this reason, much of what is known about quarks has been drawn from observations of the hadrons themselves. The quark model was independently proposed by physicists Murray Gell-Mann and George Zweig in 1964.[5] Quarks were introduced as parts of an ordering scheme for hadrons, and there was little evidence for their physical existence until deep inelastic scattering experiments at the Stanford Linear Accelerator Center in 1968.[6][7] Accelerator experiments have provided evidence for all six flavors. Classification[edit]

www.psychologytoday My 24-year-old male patient, who has entered my most recent posts, looks to me to struggle with his issues, but he does not look to me for comfort. I characterize our relationship as one that involves a lot of mutual fondness. He sees me as an intelligent participant in his life who helps him think and reflect on his life, but he also experiences me as emotionally distant. Transference, first described by Sigmund Freud, is a phenomenon in psychotherapy in which there is an unconscious redirection of feelings from one person to another. In the case of this patient, he has a distant mom and a warm dad who he does not see very often. article continues after advertisement I know that my critics are going to argue that perhaps I am a cold person and so this is not transference, but rather a repetition of his past. According to The Source, published in 2001, "During transference, people turn into a 'biological time machine."' My client wants to grow and he wants to feel comfort.

Francis Galton Sir Francis Galton, FRS (/ˈɡɔːltən/; 16 February 1822 – 17 January 1911) was an English Victorian era statistician, progressive, polymath, sociologist, psychologist,[1][2] anthropologist, eugenicist, tropical explorer, geographer, inventor, meteorologist, proto-geneticist, and psychometrician. He was knighted in 1909. Galton produced over 340 papers and books. He also created the statistical concept of correlation and widely promoted regression toward the mean. He was the first to apply statistical methods to the study of human differences and inheritance of intelligence, and introduced the use of questionnaires and surveys for collecting data on human communities, which he needed for genealogical and biographical works and for his anthropometric studies. He was a pioneer in eugenics, coining the term itself[3] and the phrase "nature versus nurture".[4] His book Hereditary Genius (1869) was the first social scientific attempt to study genius and greatness.[5] Early life[edit]

Adapter This mains power plug travel adapter allows British plugs to be connected to American or Australian sockets. An adapter or adaptor[1] is a device that converts attributes of one device or system to those of an otherwise incompatible device or system. The term is often used to refer to AC adapters. Some adapters may only affect physical attributes: An electrical adapter may enable connection of a socket used in one region to a plug used in another by offering connections for the disparate contact arrangements, while not changing the voltage. Other adapters may affect electrical attributes: An AC adapter, also called a recharger (a kind of transformer) adapts household electric current from high voltage (100 to 240 volts AC) to low voltage suitable for consumer electronics. References[edit] Jump up ^ Both spellings are used in both British and American English." External links[edit]

www.verywellmind In psychoanalytic theory, transference occurs when a client projects feelings about someone else, particularly someone encountered in childhood, onto her therapist. Frequently spoken about in reference to the therapeutic relationship, the classic example of sexual transference is falling in love with one’s therapist. However, you might also transfer feelings such as rage, anger, distrust, or dependence. There are three types of transference: While transference is typically a term for the mental health field, it can manifest in your daily life when your brain tries to comprehend a current experience by examining the present through the past and, to your detriment, limiting the input of new information. Transference Is Multilayered and Complex Transference can sometimes be an obstacle to therapy, as the client may feel a temptation to cut off the relationship altogether, or may become sullen and withdrawn during sessions, which impedes progress. Positive Transference Negative Transference