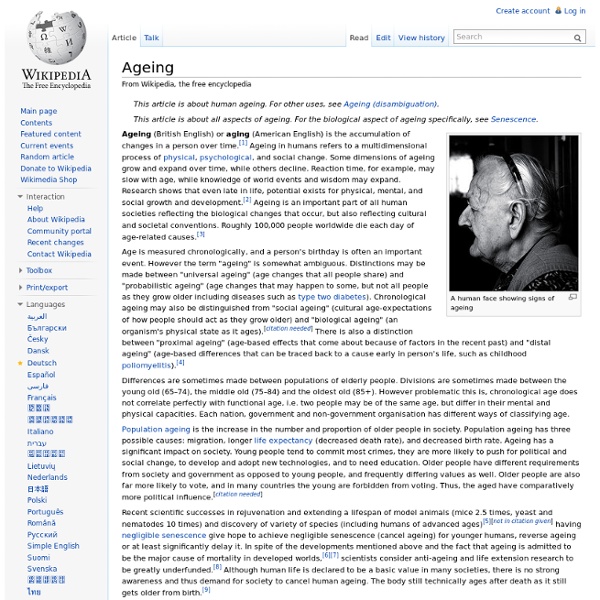 Ageing (British English) or aging (American English) is the accumulation of changes in a person over time.[1] Ageing in humans refers to a multidimensional process of physical, psychological, and social change. Some dimensions of ageing grow and expand over time, while others decline. Reaction time, for example, may slow with age, while knowledge of world events and wisdom may expand. Research shows that even late in life, potential exists for physical, mental, and social growth and development.[2] Ageing is an important part of all human societies reflecting the biological changes that occur, but also reflecting cultural and societal conventions. Ageing is among the largest known risk factors for most human diseases.[3] Roughly 100,000 people worldwide die each day of age-related causes.[4] Age is measured chronologically, and a person's birthday is often an important event. Population ageing is the increase in the number and proportion of older people in society. Senescence[edit]

Cell nucleus HeLa cells stained for the cell nucleus DNA with the BlueHoechst dye. The central and rightmost cell are in interphase, thus their entire nuclei are labeled. On the left, a cell is going through mitosis and its DNA has condensed. Because the nuclear membrane is impermeable to large molecules, nuclear pores are required that regulate nuclear transport of molecules across the envelope. The pores cross both nuclear membranes, providing a channel through which larger molecules must be actively transported by carrier proteins while allowing free movement of small molecules and ions. History[edit] Between 1877 and 1878, Oscar Hertwig published several studies on the fertilization of sea urchin eggs, showing that the nucleus of the sperm enters the oocyte and fuses with its nucleus. Structures[edit] Nuclear envelope and pores[edit] Nuclear pores, which provide aqueous channels through the envelope, are composed of multiple proteins, collectively referred to as nucleoporins. Nuclear lamina[edit]

Evolution of ageing Enquiry into the evolution of ageing aims to explain why almost all living things weaken and die with age. There is not yet agreement in the scientific community on a single answer. The evolutionary origin of senescence remains a fundamental unsolved problem in biology. Historically, ageing was first likened to "wear and tear": living bodies get weaker just as with use a knife's edge becomes dulled or with exposure to air and moisture iron objects rust. But this idea was discredited in the 19th century when the second law of thermodynamics was formalized. Entropy (disorder) must increase inevitably within a closed system, but living beings are not closed systems. History[edit] August Weismann was responsible for interpreting and formalizing the mechanisms of Darwinian evolution in a modern theoretical framework. Mutation accumulation[edit] The first modern, successful theory of mammal aging was formulated by Peter Medawar in 1952. Medawar's theory is referred to as Mutation Accumulation.

Eukaryote Eukaryotes can reproduce both asexually through mitosis and sexually through meiosis and gamete fusion. In mitosis, one cell divides to produce two genetically identical cells. In meiosis, DNA replication is followed by two rounds of cell division to produce four daughter cells each with half the number of chromosomes as the original parent cell (haploid cells). These act as sex cells (gametes – each gamete has just one complement of chromosomes, each a unique mix of the corresponding pair of parental chromosomes) resulting from genetic recombination during meiosis. Cell features[edit] Eukaryotic cells are typically much larger than those of prokaryotes. Internal membrane[edit] Detail of the endomembrane system and its components A 3D rendering of an animal cell cut in half. The nucleus is surrounded by a double membrane (commonly referred to as a nuclear membrane or nuclear envelope), with pores that allow material to move in and out. Vesicles may be specialized for various purposes.

Chronological and replicative ageing Attempts to determine the age of a cell are confounded by the distinction between chronological and replicative ageing. Certain stem cells may give rise to postmitotic cells that are present in the tissue for the entire lifespan of the organism. Such postmitotic cells experience primarily chronological ageing. To the extent that the stem cells within those tissues remain quiescent, they would also experience mainly the effects of chronological ageing. By contrast, certain stem cells, particularly those in tissues with high turnover, divide regularly and generate progeny that undergo extensive proliferative expansion.

Poliomyelitis Although approximately 90% of polio infections cause no symptoms at all, affected individuals can exhibit a range of symptoms if the virus enters the blood stream.[3] In about 1% of cases, the virus enters the central nervous system, preferentially infecting and destroying motor neurons, leading to muscle weakness and acute flaccid paralysis. Different types of paralysis may occur, depending on the nerves involved. Spinal polio is the most common form, characterized by asymmetric paralysis that most often involves the legs. Bulbar polio leads to weakness of muscles innervated by cranial nerves. Poliomyelitis was first recognized as a distinct condition by Jakob Heine in 1840.[5] Its causative agent, poliovirus, was identified in 1908 by Karl Landsteiner.[5] Polio had existed for thousands of years in certain areas, with depictions of the disease in ancient art. Classification The term "poliomyelitis" is used to identify the disease caused by any of the three serotypes of poliovirus.

Microscope A microscope (from the Ancient Greek: μικρός, mikrós, "small" and σκοπεῖν, skopeîn, "to look" or "see") is an instrument used to see objects that are too small for the naked eye. The science of investigating small objects using such an instrument is called microscopy. Microscopic means invisible to the eye unless aided by a microscope. There are many types of microscopes, the most common and first to be invented is the optical microscope which uses light to image the sample. History[edit] The first microscope to be developed was the optical microscope, although the original inventor is not easy to identify. Rise of modern light microscopy[edit] The first detailed account of the interior construction of living tissue based on the use of a microscope did not appear until 1644, in Giambattista Odierna's L'occhio della mosca, or The Fly's Eye.[4] It was not until the 1660s and 1670s that the microscope was used extensively for research in Italy, The Netherlands and England. Types[edit]

Mitochondrion Two mitochondria from mammalian lung tissue displaying their matrix and membranes as shown by electron microscopy History[edit] The first observations of intracellular structures that probably represent mitochondria were published in the 1840s.[13] Richard Altmann, in 1894, established them as cell organelles and called them "bioblasts".[13] The term "mitochondria" itself was coined by Carl Benda in 1898.[13] Leonor Michaelis discovered that Janus green can be used as a supravital stain for mitochondria in 1900. In 1939, experiments using minced muscle cells demonstrated that one oxygen atom can form two adenosine triphosphate molecules, and, in 1941, the concept of phosphate bonds being a form of energy in cellular metabolism was developed by Fritz Albert Lipmann. The first high-resolution micrographs appeared in 1952, replacing the Janus Green stains as the preferred way of visualising the mitochondria. In 1967, it was discovered that mitochondria contained ribosomes. Structure[edit]