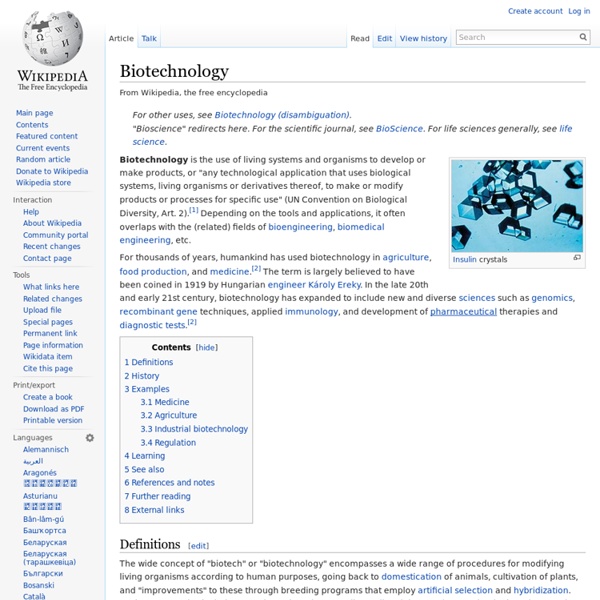 "Bioscience" redirects here. For the scientific journal, see BioScience. For life sciences generally, see life science. Biotechnology is the use of living systems and organisms to develop or make products, or "any technological application that uses biological systems, living organisms or derivatives thereof, to make or modify products or processes for specific use" (UN Convention on Biological Diversity, Art. 2).[1] Depending on the tools and applications, it often overlaps with the (related) fields of bioengineering, biomedical engineering, etc. For thousands of years, humankind has used biotechnology in agriculture, food production, and medicine.[2] The term is largely believed to have been coined in 1919 by Hungarian engineer Károly Ereky. Definitions[edit] History[edit] Brewing was an early application of biotechnology Agriculture has been theorized to have become the dominant way of producing food since the Neolithic Revolution. Examples[edit] Medicine[edit] Agriculture[edit] Related:  Our final invention

Nanotechnology Nanotechnology ("nanotech") is the manipulation of matter on an atomic, molecular, and supramolecular scale. The earliest, widespread description of nanotechnology[1][2] referred to the particular technological goal of precisely manipulating atoms and molecules for fabrication of macroscale products, also now referred to as molecular nanotechnology. A more generalized description of nanotechnology was subsequently established by the National Nanotechnology Initiative, which defines nanotechnology as the manipulation of matter with at least one dimension sized from 1 to 100 nanometers. This definition reflects the fact that quantum mechanical effects are important at this quantum-realm scale, and so the definition shifted from a particular technological goal to a research category inclusive of all types of research and technologies that deal with the special properties of matter that occur below the given size threshold. Origins[edit] Comparison of Nanomaterials Sizes

Singapore Launches Program In San Francisco To Attract More U.S. Startups Singapore is already one of the most developed startup hubs in Asia. Now its government wants to bring more U.S. startups to the city-nation. Earlier today, the Infocomm Development Authority Of Singapore, a government organization focused on growing the country’s tech industry, opened a new office for Infocomm Investments in co-working space Block 71 San Francisco, which was originally set up by NUS Enterprise, an entrepreneur program run by the National University of Singapore, and SingTel Innov8, the telecom’s investment arm. While Block 71 San Francisco was first launched to help Singaporean companies break into the U.S. market, Infocomm Investments’ new office will help U.S. startups that want to expand into Asia. Infocomm Investments and Block 71 San Francisco are part of a larger initiative by Singapore called Smart Nation, which launched in December with the aim of growing the city-nation’s tech industry. Photo Credit: williamcho via Compfight cc

Seedcamp Reveals 7 New Startup Investments When we last caught up with Seedcamp, it had just invested in seven new startups. Now it’s ready to announce its latest batch of investments with five springing from Seedcamp Berlin and two graduates of previous Seedcamp weeks emerging from working in stealth. At Seedcamp Berlin, the micro-seed investment and mentoring program invited 19 companies to attend from hundreds of applicants. Branchtrack Based in Riga, Latvia, Branchtrack allows users to create ‘Choose Your Own Adventure’-style simulations for sales and customer care training online. Cronofy Working out of Nottingham and London in the UK, Cronofy is a unified calendar API that allows developers to better integrate their apps into customers’ lives. Lateral Developed by a team of five based in Berlin, Lateral uses machine intelligence to create bots that automatically generate feeds of news that’s relevant to you, based on what you’re working on. Now Native Podo Labs The other two new Seedcamp investments are: Divido Fluttr

Futures studies Moore's law is an example of futures studies; it is a statistical collection of past and present trends with the goal of accurately extrapolating future trends. Futures studies (also called futurology and futurism) is the study of postulating possible, probable, and preferable futures and the worldviews and myths that underlie them. There is a debate as to whether this discipline is an art or science. In general, it can be considered as a branch of the social sciences and parallel to the field of history. In the same way that history studies the past, futures studies considers the future. Overview[edit] Futures studies is an interdisciplinary field, studying yesterday's and today's changes, and aggregating and analyzing both lay and professional strategies and opinions with respect to tomorrow. Foresight may be the oldest term for the field. The futures field also excludes those who make future predictions through professed supernatural means. Probability and predictability[edit]

NSW bets $1.7 million on medtech hub in Sydney | Business Insider With an election just three weeks away, the New South Wales government is continuing to place bets on industry hubs to help commercialise innovation, announcing today that it would spend $1.7 million on a medical tech knowledge hub. The “medtech” hub was the fourth of five industry-led Hubs being rolled out in NSW. Last week the government threw its support behind a financial industry tech hub, named Stone and Chalk, in Sydney’s CBD. The medtech hub is based at Baxter Healthcare in Toongabbie and is coordinated by the industry body Medical Technology Association of Australia. The money comes from the NSW department of trade and investment and will be spent over two years, with five industry partners also involved in the project to mentor and train small-to-medium enterprises to commercialise their ideas. Details on the NSW Knowledge Hubs are here.