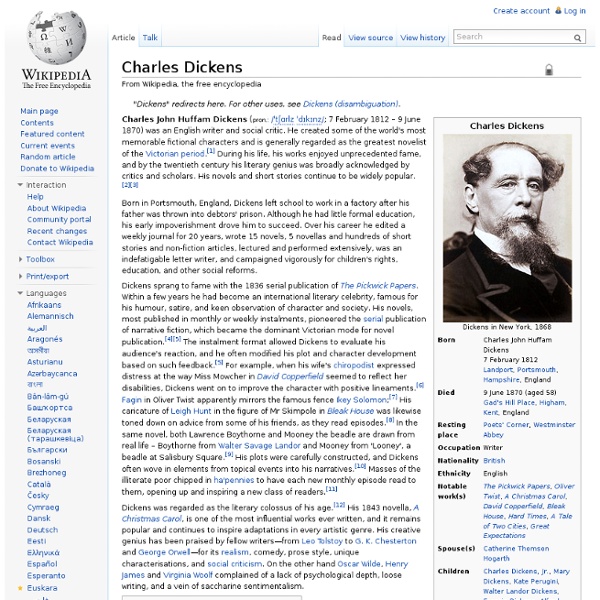 Charles John Huffam Dickens (/ˈtʃɑrlz ˈdɪkɪnz/; 7 February 1812 – 9 June 1870) was an English writer and social critic. He created some of the world's most memorable fictional characters and is generally regarded as the greatest novelist of the Victorian period.[1] During his life, his works enjoyed unprecedented fame, and by the twentieth century his literary genius was broadly acknowledged by critics and scholars. His novels and short stories continue to be widely popular.[2][3] Born in Portsmouth, England, Dickens was forced to leave school to work in a factory when his father was thrown into debtors' prison. Although he had little formal education, his early impoverishment drove him to succeed. Life Early years Charles Dickens' birthplace 2 Ordnance Terrace, Chatham, Dickens' home 1817–1822 Charles John Huffam Dickens was born on 7 February 1812, at Landport in Portsea Island, the second of eight children to John Dickens (1785–1851) and Elizabeth Dickens (née Barrow; 1789–1863).

Past and Present (book) Past and Present is a book by Thomas Carlyle. It was published in April 1843 in England and the following month in the United States. It combines medieval history with criticism of 19th-century British society. Carlyle wrote it in seven weeks as a respite from the harassing labor of writing Cromwell. Karl Marx Karl Marx[note 1] (/mɑrks/;[4] German pronunciation: [ˈkaɐ̯l ˈmaɐ̯ks]; 5 May 1818 – 14 March 1883) was a German philosopher, economist, sociologist, journalist, and revolutionary socialist. Marx's work in economics laid the basis for much of the current understanding of labour and its relation to capital, and subsequent economic thought.[5][6][7][8] He published numerous books during his lifetime, the most notable being The Communist Manifesto (1848) and Das Kapital (1867–1894). Born into a wealthy middle-class family in Trier in the Prussian Rhineland, Marx studied at the Universities of Bonn and Berlin where he became interested in the philosophical ideas of the Young Hegelians. After his studies he wrote for Rheinische Zeitung, a radical newspaper in Cologne, and began to work out the theory of the materialist conception of history. Early life[edit] Childhood and early education: 1818–1835[edit]

Poor Law Amendment Act 1834 The Amendment Act was passed two years after the 1832 Reform Act extended the franchise to the middle-classes. Some historians have argued that this was a major factor in the PLAA being passed. Parliament radicals such as Cobbett defended the right of the poor to relief, and the legislation was widely opposed by press (notably The Times). Chadwick was unsatisfied by the law that resulted from his report. The importance of the Poor Law declined with the rise of the welfare state in the 20th century.

Fulton J. Sheen Fulton John Sheen (born Peter John Sheen, May 8, 1895 – December 9, 1979) was an American bishop (later archbishop) of the Roman Catholic Church known for his preaching and especially his work on television and radio. His cause for canonization as a saint was officially opened in 2002. In June 2012, Pope Benedict XVI officially recognized a decree from the Congregation for the Causes of Saints stating that he lived a life of "heroic virtues" – a major step towards beatification – so he is now referred to as "Venerable".[2][3]

Book Review - The Elephant’s Journey - By José Saramago The Portuguese writer died in June at the age of 87. He won the in Literature in 1998, having peaked as a writer later in life. His prose is impish and subtle enough to bear comparison with Italo Calvino and Georges Perec, even if he lacked their scope. Saramago was a Communist. Utilitarianism Utilitarianism is influential in political philosophy. Bentham and Mill believed that a utilitarian government was achievable through democracy. Mill thought that despotism was also justifiable through utilitarianism as a transitional phase towards more democratic forms of governance. As an advocate of liberalism, Mill stressed the relationship between utilitarianism and individualism.[10] Historical background[edit] The importance of happiness as an end for humans has long been recognized.

Mircea Eliade Noted for his vast erudition, Eliade had fluent command of five languages (Romanian, French, German, Italian, and English) and a reading knowledge of three others (Hebrew, Persian, and Sanskrit). He was elected a posthumous member of the Romanian Academy. Biography[edit] Childhood[edit]

Dick Turpin Richard "Dick" Turpin (bap. 1705 – 7 April 1739) was an English highwayman whose exploits were romanticised following his execution in York for horse theft. Turpin may have followed his father's profession as a butcher early in life, but by the early 1730s he had joined a gang of deer thieves, and later became a poacher, burglar, horse thief and killer. He is also known for a fictional 200-mile (320 km) overnight ride from London to York on his horse Black Bess, a story that was made famous by the Victorian novelist William Harrison Ainsworth almost 100 years after Turpin's death.

Transcendentalism Transcendentalism is a religious and philosophical movement that developed during the late 1820s and '30s[1] in the Eastern region of the United States as a protest against the general state of spirituality and, in particular, the state of intellectualism at Harvard University and the doctrine of the Unitarian church as taught at Harvard Divinity School. Among the transcendentalists' core beliefs was the inherent goodness of both people and nature. They believe that society and its institutions—particularly organized religion and political parties—ultimately corrupt the purity of the individual. They have faith that people are at their best when truly "self-reliant" and independent. It is only from such real individuals that true community could be formed.

Norman Vincent Peale Dr. Norman Vincent Peale (May 31, 1898 – December 24, 1993) was a minister and author (most notably of The Power of Positive Thinking) and a progenitor of "positive thinking". His ideas were not accepted by mental health experts.[1] §Biography[edit] §Early life and education[edit] Peale was born in Bowersville, Ohio, the oldest of three sons of Charles and Anna (née Delaney) Peale. Metonymy For instance, "Hollywood" is used as a metonym for the U.S. film industry because of the fame and cultural identity of Hollywood, a district of the city of Los Angeles, California, as the historical center of film studios and film stars.[4] The national capital is often used to represent the government of a country, such as "Westminster" for Parliament of the United Kingdom, "Ottawa" for Parliament of Canada, or "Washington" for United States government.[5] Metonymy and related figures of speech are common in everyday talk and writing. Synecdoche and metalepsis are considered specific types of metonymy. Polysemy, multiple meanings of a single word or phrase, sometimes results from relations of metonymy.

Übermensch The Übermensch (German for "Overman, Overhuman, Above-Human, Superman, Super-human"; German pronunciation: [ˈˀyːbɐmɛnʃ]) is a concept in the philosophy of Friedrich Nietzsche. Nietzsche had his character Zarathustra posit the Übermensch as a goal for humanity to set for itself in his 1883 book Thus Spoke Zarathustra (German: Also Sprach Zarathustra), although Nietzsche clearly disagreed with many things he had Zarathustra say. There is no consensus regarding the precise meaning of the Übermensch, nor on the importance of the concept in Nietzsche's thought. There are other conceptions of superhuman nature besides those that are labeled Übermensch. Übermensch in English[edit] The German prefix über can have connotations of superiority, transcendence, excessiveness, or intensity, depending on the words to which it is prepended.[3] Mensch refers to a member of the human species, rather than to a male specifically.

Paulo Coelho §Biography[edit] Paulo Coelho was born in Brazil[2] and attended a Jesuit school. As a teenager, Coelho wanted to become a writer. i Upon telling his mother this, she responded with "My dear, your father is an engineer. He's a logical, reasonable man with a very clear vision of the world. Do you actually know what it means to be a writer?"[2] After researching, which was common for him since he was a policy debater when he was in high school, Coelho concluded that a writer "always wears glasses and never combs his hair" and has a "duty and an obligation never to be understood by his own generation," amongst other things.[2] At 17, Coelho's introversion and opposition to following a traditional path led to his parents committing him to a mental institution from which he escaped three times before being released at the age of 20.[3][4] Coelho later remarked that "It wasn't that they wanted to hurt me, but they didn't know what to do...

The Art of Being Still Draft is a series about the art and craft of writing. Many of the aspiring writers I know talk about writing more than they actually write. Instead of setting free the novel or short story or essay that is sizzling at the ends of their fingers, desperate to set fire to the world, they fret about writer’s block or about never having the time to write. Yet as they complain, they spend a whole lot of that precious time posting cartoons about writing on Facebook or putting up statuses about how if they only had more free time they just know they could get their novels written. They read books about writing and attend conferences, workshops and classes where they talk ad nauseam about writing.